'Daughters of the Dust': Why the Movie That Inspired 'Lemonade' Is Back 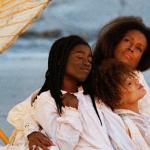 For a 25-year-old period drama about a multigenerational African-American family concerned with preserving its past while heading into an unknown future, Daughters of the Dust couldn’t be timelier — and the 1991 movie may finally be having its moment. Chronicling the Peazants, who in 1902 are departing their beloved Dawtuh Island off the East Coast to venture to the U.S. mainland, this poetic, poignant indie has long been overlooked — a movie more rhapsodized about than actually seen. That changes when Daughters returns to theaters on Novemember 18th in a gorgeous restoration, its influence and relevance never more undeniable.

It's a film that feels both familiar and as if it's beamed in from a parallel, forgotten world in which time has stood still. For writer-director Julie Dash, that effect was essential to a story she’d been pondering since the late 1970s. "I really wanted to see an African-American historical drama that took me places that I had never been to before," she says, "just like I was taken places when I was watching foreign films or even some American epics. Films I was seeing at the time weren't really made for African-Americans — they were made to explain our history to others."

A graduate of the American Film Institute and UCLA's film school, the Queens-born writer-director was inspired by her father's childhood among the Gullah: African-Americans descended from slaves who lived on the Sea Islands off the coast of South Carolina and Georgia. Diving into research that took her from California to New York, she began to develop a narrative that drew from West African storytelling traditions, even featuring occasional voiceover by the unborn daughter of two of the characters.

"I was going against Western story structure," Dash acknowledges. Initially, she wrote a more traditional three-act script, "but the more I learned, the more I wanted the structure of this story to be told from the ancient to the future. The motif is the culture of the Sea Islands of the South, but it is not my family's story. In fact, it's everyone's story. Every few generations, there's a massive movement towards global change. People migrate, people move away, people want different things."

That generational restlessness drives Daughters' wistful uncertainty and reveals cracks in the Peazant family. The elderly matriarch Nana (Cora Lee Day) wants to stay to preserve their legacy, while her Westernized grandchildren – such as Viola (Cheryl Lynn Bruce), who has become Baptist since moving to the States – are ready for the family to integrate into 20th-century American life. In the Peazants' conversations, viewers see a mythic African-American argument play out concerning how best to honor long-held African customs while embracing a white society that offers exciting new possibilities – and, potentially, portends a loss of identity.

Reportedly made for only $800,000, Daughters of the Dust was Dash's first feature and was selected for Sundance's 1991 dramatic competition, which included the feature debut of two other quintessential American filmmakers, Todd Haynes' Poison and Richard Linklater's Slacker. It won the cinematography prize for Arthur Jafa's beautiful images of this rustic paradise, but the director quickly realized the tough road ahead for her film.

"It was very exciting," Dash says about being at Sundance. "But I had been warned. I didn't get there until the first screening had already happened, and when I arrived, they said, 'Well, everyone said it's a beautiful movie ... but they don't understand it.' It was kinda pushed to the side, to be quite honest." She struggled to secure a U.S. theatrical release; finally, independent distributor Kino International, which specializes in bringing world cinema to American audiences, took a chance. "They saw it for what it was: a foreign film."

When Daughters opened in New York almost exactly one year after premiering at the festival, the movie did sellout business for weeks, buoyed by strong reviews from Roger Ebert and the New York Times. In the process, Dash became the first African-American woman to have a movie in general theatrical release.

And then … the follow-up never materialized. In subsequent years, she directed music videos, commercials and the 2002 CBS drama The Rosa Parks Story, which starred Angela Bassett. But as Dash told a journalist in 2011, "I have done cable movies. … I have never gotten a motion-picture deal."

Depressingly, the lack of big-screen opportunities wasn't very surprising — and it traces back to the initial resistance Dash encountered while seeking distribution for her accomplished but unfashionable debut. As she recalls, "Someone said, 'Oh, it's not an authentic African-American film,' because, at the time, the urban dramas were coming out. Juice was doing very well at the box office. So, Daughters of the Dust was not quote-unquote 'authentic.'" Even after the movie did robust art-house business, that wasn't enough to convince the suits to finance her future projects: "I was told by many major studio heads that that was a fluke."

In the aftermath, she focused on teaching and working, even writing Daughters of the Dust: A Novel in 1997 that was a sequel to her under-seen film. Still, she remained confident that the movie was reaching an audience that was tired of seeing representations of black life that were positioned for white consumption. "When you talk to African people, they tend to say that [Daughters] felt like being home," she says. "It's been used for birthing ceremonies, it's been used at weddings. Dialogue is taken from it to use at funerals. People have told me they’ve seen it, like, 25 times. Usually, we're subject to films that have us in them — but they're explaining stuff to other people. We already know this information. We wanna see something that nourishes us."

But recently, Daughters' visibility has risen. In 2004, the United States National Film Preservation Board added the movie to its preservation list, acknowledging its place among the country's "culturally, historically, or aesthetically significant films." Now, Cohen Media Group will be unveiling a 2K restoration spearheaded by, among others, the UCLA Film & Television Archive, giving the movie its first meaningful theatrical release since 1992.

Just as Cohen was preparing to begin advertising the restoration, however, the company received the best possible promotion — entirely by accident. In April, Beyoncé released her blockbuster visual album Lemonade, which featured imagery of women lounging in trees that bore a striking similarity to Daughters scenes. Publications like the New York Times and Vanity Fair picked up on the connection, running pieces that introduced the quarter-century-old film to readers who may have never heard of it before. A Beyoncé fan, Dash found out about the hour-long special when friends started excitedly blowing up her phone during its HBO premiere. But although she's tickled by the high-profile homage and her movie's re-release, she doesn't feels like they’re vindication for the years that her film toiled in relative obscurity.

"I think vindication is the wrong word," she says. "As artists, each project you take on is a challenge. You try to work your magic and do the best you can. Then you go on to the next, and how it's received often is not as significant as having had it made. I learned a lot making it — I was able to express myself — but it's like writing a poem or painting a picture. You make it, and then you move on. I'm already on to the next thing. But I'm thrilled a whole new generation gets to see it and comment on it."

'Daughters of the Dust' is now screening in New York City at the Film Forum.  For screenings in other cities, check your local listings.