Why Pat McCrory Lost and What It Means in Trump's America 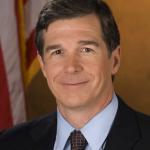 Pat McCrory's now official defeat in the race for Governor of North Carolina has real implications for the progressive movement nationally in the era of Trump.

The dominant reason given for McCrory's defeat will be the unpopularity of HB2, and certainly that played an important role. In August we found that only 30% of voters in the state supported it, and that McCrory's handling of the issue made them less likely to vote for him by a 12 point margin. If he'd vetoed it, he very well might have been reelected.

But the seeds of McCrory's defeat really were planted by the Moral Monday movement in the summer of 2013, just months after McCrory took office.

McCrory really could claim somewhat of a mandate when he was elected. He won by 12 points in 2012 even as Mitt Romney carried the state by only 2 points, and our polling found him winning independent voters 2:1 and winning about 25% of Democrats. He was seen as being a different kind of Republican, and he got significant crossover support because of that.

But despite going into office with all that popularity and goodwill, he had a negative approval rating by July of 2013, just 8 months after his triumphant election. And he stayed with a negative approval rating every single month until this October in our polling- 39 months in a row of an under water approval rating. Only positive reactions to his handling of Hurricane Matthew got him back in positive territory at the very end, but in the end hostility towards his tenure as Governor was deeply ingrained enough in voters that it only allowed him to lose by a smaller margin than he would have if not for the Hurricane.

What happened in the summer of 2013 to make McCrory so permanently unpopular? He allowed himself to be associated with a bunch of unpopular legislation, and progressives hit back HARD, in a way that really caught voters' attention and resonated with them.

Medicaid Expansion? 56% of voters wanted it to move forward, only 26% wanted it blocked.

Sneaking in abortion legislation by putting it in a bill about motorcycle safety? 8% of voters supported that, 80% opposed it.

Eliminate the Earned Income Tax Credit?  Only 30% of voters wanted to do that, 42% thought it should be kept.

Cut unemployment benefits? Only 29% of voters agreed with changes in the law, 55% were opposed.

Reduce the early voting period in North Carolina by a week? Just 33% of voters wanted to do that, 59% were against it.

Straight party ticket voting? 68% of voters wanted it continued, only 21% wanted it eliminated.

McCrory spearheaded or went along with all of this. And he might have gotten away with it without much impact on his image. Most voters don't pay close attention to state government.

But the Moral Monday movement pushed back hard. Its constant visibility forced all of these issues to stay in the headlines. Its efforts ensured that voters in the state were educated about what was going on in Raleigh, and as voters became aware of what was going on, they got mad. All those people who had seen McCrory as a moderate, as a different kind of Republican, had those views quickly changed. By July McCrory had a negative approval rating- 40% of voters approving of him to 49% who disapproved. By September it was all the way down to 35/53, and he never did fully recover from the damage the rest of his term.

Moral Mondays became a very rare thing- a popular protest movement. In August 2013 we found 49% of voters had a favorable opinion of the protesters to only 35% with an unfavorable opinion of them. And their message was resonating- 50% of voters in the state felt state government was causing North Carolina national embarrassment to only 34% who disagreed with that notion.

Pushing back hard on McCrory worked. The seeds of his final defeat today were very much planted in the summer of 2013. And it's a lesson for progressives in dealing with Trump. Push back hard from day one. Be visible. Capture the public's attention, no matter what you have to do to do it. Don't count on the media to do it itself because the media will let you down. The protesters in North Carolina, by making news in their own right week after week after week, forced sustained coverage of what was going on in Raleigh. And even though it was certainly a long game, with plenty more frustration in between, those efforts led to change at the polls 42 months after they really started.