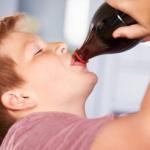 Junk food adverts that are targeted at children are to be prohibited on the internet, in print and at the cinema following a consultation.

The consultation found that such adverts actively encourage children to eat unhealthy food and was conducted by the Committee on Advertising Practice (CAP). The move has been met with relief from health campaigners, who have long been frustrated by the omnipresence of ads for excess sugary drinks and fat-filled products aimed at children, often on mobile devices in the form of games and fun activities. . The CAP said it was bringing other media in line with the rules on TV advertising. “Childhood obesity is a serious and complex issue and one that we’re determined to play our part in tackling,” said its chairman, James Best.

“These restrictions will significantly reduce the number of ads for high fat, salt or sugar products seen by children. Our tough new rules are a clear demonstration that the ad industry is willing and ready to act on its responsibilities and puts the protection of children at the heart of its work.”

One such health campaign group, Action on Sugar, greeted the new rules with relief.

“However, we need to see bans on advertising go further, as they currently do not manage exposure to these adverts during popular family programmes such as the X Factor or Britain’s Got Talent,” said its campaign manager, Jenny Rosborough, a registered nutritionist.

The Food and Drink Federation, also made a statement. “Last year, FDF announced its backing for major changes to the way food and drink is advertised, based on our belief that non-broadcasting advertising rules should be in line with the strict rules already in place for TV,” said its chief executive, Ian Wright.

It will certainly remain to be seen whether the measure go far enough and in light of the previous disappointment at the watered down anti-obesity regulation imposed earlier this year many believe more needs to be done.