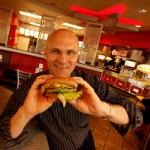 Andrew Puzder, Donald Trump’s nominee for labor secretary, is uniquely unqualified for that job. As secretary, he’d be charged with enforcing health and safety, overtime and other labor laws. But as CEO of CKE Restaurants, the parent company of Hardee’s and Carl's Jr., he’s made his considerable fortune from violating these very same laws, according to a report by the Restaurant Opportunities Centers (ROC) United released this week. ROC, which advocates for restaurant workers nationwide, surveyed 564 CKE workers, 76 percent of them women. In discussing the results of the survey, it’s important to note that while ROC surveyed a large number of workers, the respondents are people who chose to fill out a survey distributed by a workers’ rights organization, which they learned about through their social media networks. Still, ROC reported “unprecedented” interest in the survey among workers at CKE and their eagerness to be part of the study, and the experiences they reported, are striking reminders that by tapping Puzder, Trump has made clear that his administration will be a dystopian nightmare for U.S. workers. A recent national survey among non-managerial women working in fast food found that 40 percent of such women have experienced sexual harassment on the job. Under Puzder, the problem could worsen: A whopping 66 percent of female CKE workers ROC surveyed had faced sexual harassment. Harassment came from supervisors, co-workers or—most often—customers, and took the form of sexual comments, groping, unwanted sexual texts and pressure for dates. CKE is known for its sexist advertising, which depicts women in skimpy bikinis devouring cheeseburgers. And, certainly, imagery contributes to the culture, but when harassment is as pervasive as it appears to be at CKE, there are usually more structural problems at play. Companies in which women are harassed are generally places in which women—indeed, workers in general—are not valued or respected, and in which workers lack any institutional means to stand up for their rights. In such companies, women are often not paid and promoted fairly. And, as one might expect, nearly one in five of the CKE workers ROC surveyed said he or she had faced discrimination at work, most commonly on the basis of gender, age or race. Of the CKE employees who participated in the ROC survey, nearly one-third said they did not get meal breaks that are mandated by law; around one-fourth had been illegally forced to work off the clock or had timecards altered; almost one-third had been illegally deprived of overtime pay. The ROC survey also found widespread health and safety violations. Nearly one-third of those surveyed said they had become sick or injured on the job. Workers described an environment of slippery floors, frequent grease burns and many said they had to do dangerous tasks—like cleaning a hood over a hot char broiler, for instance—without proper protective equipment. Appointing Puzder as labor secretary is like inviting Tony Soprano to serve as attorney general. Let’s hope this enemy of working people will face humiliation and defeat when his confirmation goes before the Senate. His hearing, originally set for next Tuesday, may now be postponed until February. That delay would give labor—meaning anyone who works for a living—more time to mobilize against him. Let’s get started. Never has independent journalism mattered more. Help hold power to account: Subscribe to In These Times magazine, or make a tax-deductible donation to fund this reporting. LIZA FEATHERSTONE Liza Featherstone is the author of Selling Women Short: The Landmark Battle for Workers’ Rights at Wal-Mart.