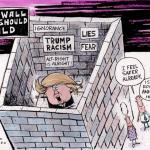 After most of the residents were ethnically cleansed, a temporary wall of fences was built around remaining 3500 Palestinians in Al-Majdal to starve them until they agreed to leave ‘voluntarily’ in 1951 (long after the end of the 1948 war).  The city was renamed Ashqelon.

The wall around Gaza was completed before even the first Palestinian suicide bombings started and it was a clear failure. Hundreds of tunnels were dug underneath and used to transport everything from people to camels to cars.

The wall in the West Bank was less than 25% complete when Hamas made a political decision to stop bombings and run for elections in 2006.  Hamas held to its end of this even though they were not allowed to govern after being elected.

The International Court of Justice ruled the wall illegal since it is built in the occupied areas (just like the Israeli colonies are illegal and subject to 4th Geneva convention).

Even today in 2017, the wall is actually less than 70% complete; nearly 10,000 Palestinians cross to the Israeli side without Israeli permission to work DAILY and so any person interested in doing violence could do it.

The wall zigzags in ways clearly intended to capture maximum agricultural lands and natural resources instead of being more secure straighter lines in most of its currently built course. (what Zionists call ‘maximum geography with minimum demography’).

The Israeli wall was slated to cost $2.5 billion and be finished in three years and here we are 14 years later and it cost $8 billion and is not even finished yet! Imagine the US wall (expected to cost $15-20 billion but will cost 3-4 times more). US taxpayers are already burdened with $20 trillion public debt (roughly $60,000 for each of us).

Philosophically and morally, I find walls repugnant. Some who support them say you have to be realistic and accept our divisive human nature and look to protect "our country". But history tells us that nationalism and protectionism lead to catastrophe. You cannot have it both ways: think of your-self as morally superior while also thinking of 'countries' and 'nations' as fighting in a zero sum game. Actually the competition itself may be the only zero-sum when you are thinking of sates. The latest spat created by Trump with Mexico will hurt both countries. Trump and his Zionist handlers are also trying to prop-up India (as a balance to Islamic countries); see appointment of the only Indian-American in Trump's cabinet (Nikki Haley, ardent Israeli apologist). This will surely also backfire hurting India, USA, and Islamic countries (opening more roads to Daesh and its like minded terror groups to recruit).  It is exactly like when Zionists pushed for the US war on Iraq that damaged Iraq but also damaged the US ($3 trillion cost and thousands of American lives) and Israel (because removing Saddam strengthened Lebanon, Hizbollah, Syria, and Iran). China will come out a winner because it is working to keep good relations with everyone.

The MLA just released this report on conditions within Palestinian universities
https://mlaboycott.files.wordpress.com/2016/12/mla-palestinian-voices.pdf

Kairos, Jewish Voice for Peace and many other groups oppose the appointment of racist Zionist (but that is redundant)  David Friedman who supports violations of human rights (colonial settlements on Palestinian land) as
the US Ambassador to Israel and the plan to move the US Embassy to Jerusalem. Join them /us.
For personal signatures:
https://org.salsalabs.com/o/301/p/dia/action3/common/public/?action_KEY=20940

In addition, call the local offices of your Senators and your Congressional Representative in your state and congressional district or write letters to their offices there.

I am glad we have a good community of volunteers and activists here at the Bethlehem Univesrity Museum of Natural History and our Palestine Institute of Biodiversity and Sustainability. "Thinking globally and acting locally" keeps our sanity in this crazy world where the lunatics run governments (Theresa May, Trump, Netanyahu....).