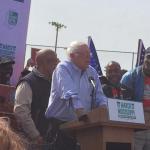 CANTON, Miss. - U.S. Sen. Bernie Sanders of Vermont told an estimated crowd of 3,000 Saturday that “the eyes of the country and the eyes of the world” are on Mississippi and the workers at Nissan’s giant plant here.
“All of our people deserve decent wages and decent benefits,” Sanders told the cheering crowd. “What this struggle is about is a struggle for decency. … One worker has zero power, but when workers stand together, you have power.”
Sanders was one of several prominent speakers at the “March on Mississippi” in Canton Saturday, arguably the largest labor rally in the state’s history. The crowd included labor leaders from France and Brazil, United Mine Workers members, and students from the University of Mississippi, Jackson State University, and Tougaloo College.
(To the right, Sanders in Canton talking about inequality in the United States. My apologies if the video cannot be accessed!)
They came to champion the right of the more than 5,000 workers at the mile-long Nissan plant in Canton to have a free, intimidation-free election to decide whether they want to join the United Auto Workers. Union leaders, local activists and workers have long complained of harassment against pro-union workers, the hiring of temporary workers at less wages and fewer benefits, unsafe working conditions, and the lack of a voice in company decisions on everything from working hours to the speed allowed on the assembly line.
Nissan employee Derick Whiting died recently after passing out at the worksite. Workers said they were forced to continue at the assembly line, a charge Nissan officials have denied. The U.S. Occupational Safety and Health Administration recently fined Nissan more than $20,000 for safety violations at the plant.
"They said we lied about what happened," 14-year veteran Nissan worker Travis Parks told the crowd. "I saw him lying on the floor."
Sanders said a company reporting more than $6 billion in profits and that pays its CEO $9 million a year could do better by its employees. “Share some of that wealth! … Our job is to tell corporate America they cannot have it all. What justice is about is allowing the freedom to workers to vote their conscience. If you stand up to the power of corporations in Mississippi, it’s a huge vote of confidence to the nation.”
UAW President Dennis Williams also told the crowd of the importance of what happens in Canton to the nation. “This is about you raising your fist. It’s about solidarity, empowering people, a movement. The only path to have economic justice is through collective bargaining.” 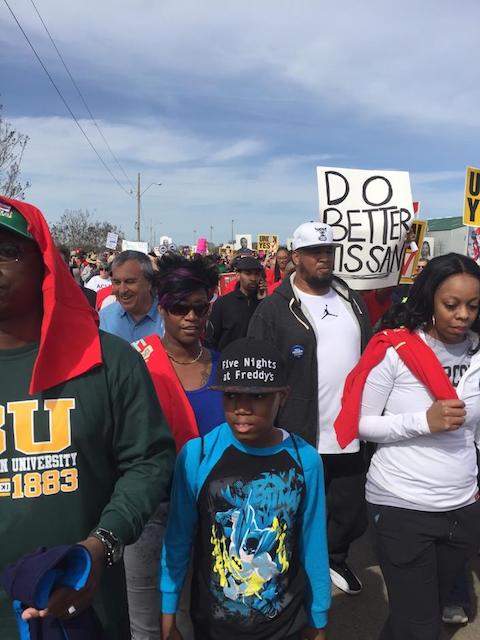 Sierra Club President Aaron Mair agreed. “If organized labor fails here, we all fail. You cannot make America great again on the back of degraded labor.”
The organizing campaign in Canton has been underway for 12 years now, beginning with a small group of UAW organizers, local activists, workers and clergy. Labor South was there at the beginning, attending those early meetings as the sole media representative for a long time.
Nissan workers earn comparatively good wages for blue-collar workers in Mississippi. However, many have complained of going years without pay raises, poor working conditions, arbitrary rules changes, and having to endure anti-union videos and other pressures against joining a union.
Source URL: https://portside.org/2017-03-11/bernie-sanders-nissan-workers-mississippi-eyes-country-and-eyes-world-are-you