A Rare Success Against Alzheimer's 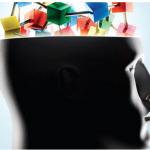 IN BRIEF: Two hundred experimental drugs intended to treat Alzheimer's disease have failed in the past 30 years. Without new therapies, the number of patients worldwide will increase dramatically by 2050.
A ray of hope has come recently from a clinical trial that showed that dementia's cognitive impairment might be prevented by paying close attention to various health factors.
Participants in the study who followed a regimen of health-related steps registered improvements on cognitive measures such as memory and mental-processing speed.
Results of this research suffice for health care professionals to begin making a series of recommendations to patients on diet, exercise and levels of social engagement that may help prevent dementia.

More people are reaching a ripe old age than ever before. Life expectancy has increased from 45 years in the early 1800s to more than 80 today in most European countries and in Japan, Canada and Australia, among other nations. In fact, if the trend continues, a majority of babies born in these countries today will live past their 100th birthday.

This greater longevity comes with some bad news. Although we manage to survive longer than preceding generations did, we often gain time without being healthier in those extra years. Studies from different parts of the world indicate that after age 60, most people have at least one chronic disorder, such as heart disease or diabetes, and a recent population-based study in Sweden found that at 80, only around one out of 10 individuals were free of chronic diseases. In fact, most people older than 80 in this population had two or more chronic illnesses.
Modern medicine has become increasingly adept at treating and controlling many of these conditions, but a few common age-related diseases have defied attempts to find preventive therapies or cures—most notably, Alzheimer's disease, the leading cause of dementia. Alzheimer's follows a merciless course that progressively deprives a person of memories and a sense of self-identity, losses that have devastating consequences for relatives and friends as well.
In the U.S., around 32 percent of people older than 85 have received an Alzheimer's diagnosis, often combined with other types of dementia, such as that caused by vascular disease. Estimates put the number worldwide with any kind of dementia at about 50 million. By 2050 if no new treatments succeed in delaying the condition, more than 130 million may suffer with some form of the disease. About 60 to 70 percent of these patients will have Alzheimer's dementia, and around 20 to 25 percent will be classified as suffering from the vascular form of the illness.
In spite of more than 100 ongoing clinical trials, no cure or drug has been able to halt the course of Alzheimer's. More than 200 experimental drugs intended to treat it have failed during the past 30 years. But all is not grim. New findings from a gold-standard clinical trial the two of us have been involved in indicate that cognitive impairment can be prevented or delayed even in the absence of new drugs by promoting changes in behavior and by managing vascular risk factors.
The study we conducted took its inspiration from epidemiological research that sought ways to reduce the risk of Alzheimer's. Such investigations, called association studies, measure, at different points, health-related variables, such as depression, high blood pressure, diet and exercise. Then, usually many years later, they investigate whether individuals go on to acquire a particular disorder. A strong correlation between a variable and the disease in question suggests that some aspect of our health history might merit being labeled as a risk factor. Also, if one of the observed variables correlates with a low risk of disease, the finding can be taken as a sign that it might be protective.
HOW WE LIVE
During the past 10 to 15 years association studies have indicated that maintaining cardiovascular health and adopting certain measures—good diet, exercise, an active social life and the achievement of higher educational levels—may diminish the risk of both Alzheimer's and other dementias later in life, even for those who carry genes that place them at increased risk. Epidemiologists have also increasingly begun to discover specific factors that may be protective—for instance, living with a partner or consuming a Mediterranean diet (mainly based on fish, vegetables, fruit and olive oil). Some studies suggest that controlling, for example, blood pressure and diabetes may constitute primary prevention—protections against the onset of a disease. They might also afford secondary prevention, slowing memory loss and other symptoms in the earliest stages of illness.
Although association studies can flag a purported protective factor, they unfortunately cannot prove that taking these steps will actually prevent dementia. People who eat a Mediterranean diet or exercise three times a week may avoid disease because of some other variable ignored by epidemiological sleuths. 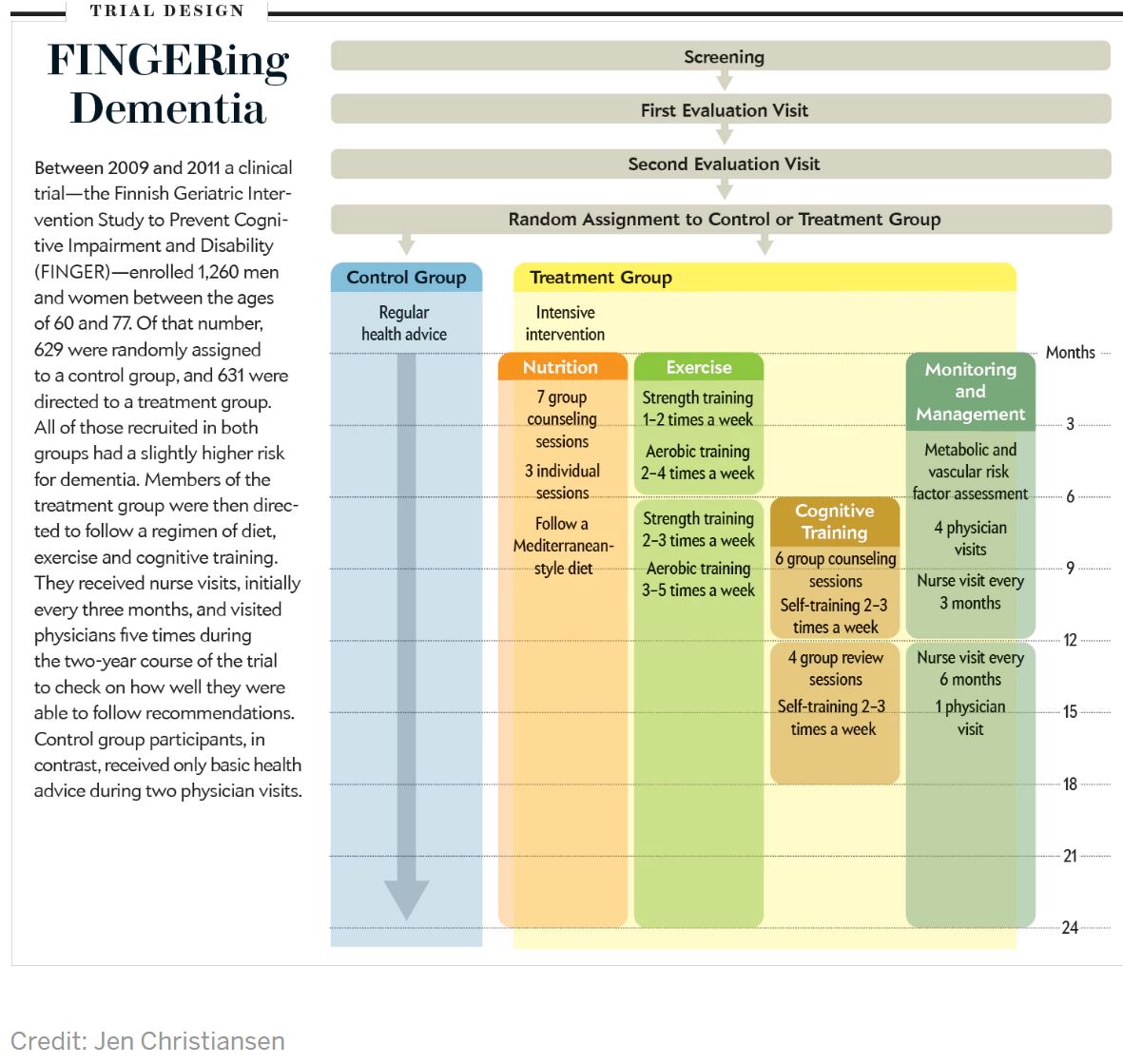 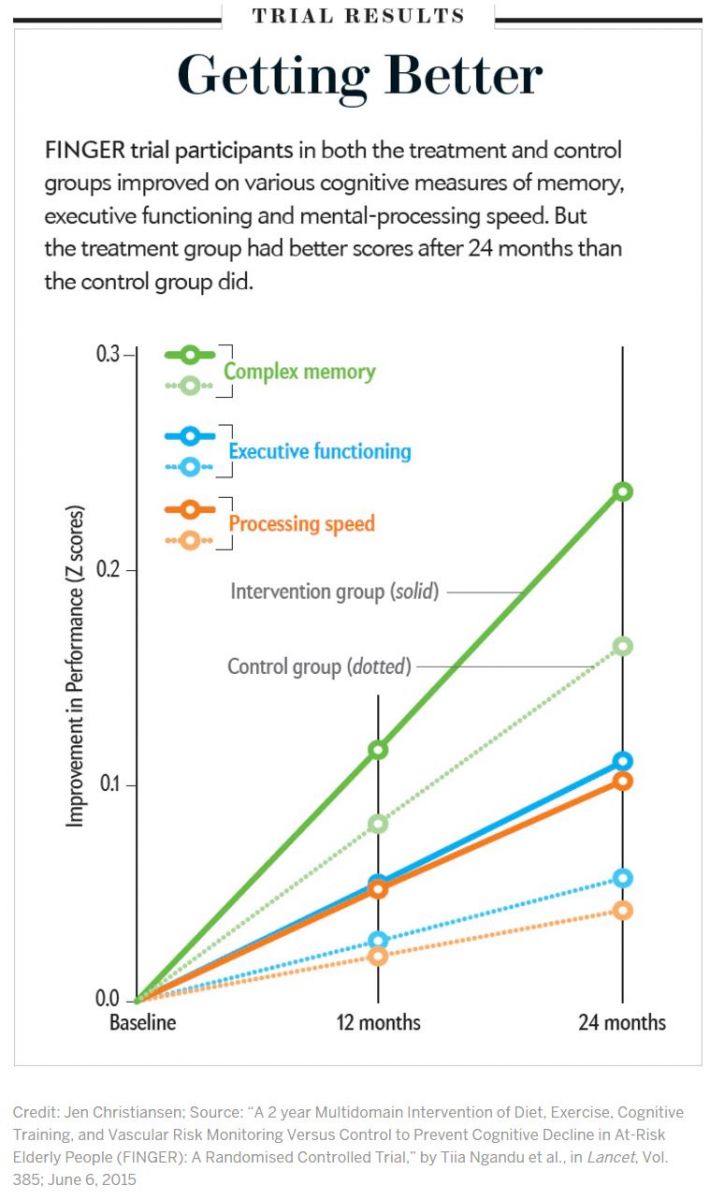 Delving further into our data, we found that participants with a gene variant (APOE e4) that puts them at higher risk for Alzheimer's seemed to receive somewhat more benefit from the specified changes than others without it, more proof of the intervention's effectiveness. Those in the treatment group who carried the risk gene had a slower rate of cellular aging, as measured by biological markers called telomeres, caps at the end of a chromosome.
FINGER EXTENSION
We now have fairly good evidence that a combination of improved diet, physical exercise, mental and social stimulation, and management of cardiovascular problems can improve cognition even after age 60. But we still have more follow-up work to do on our original results.
Finding an improvement in mental functioning after two years implies—but does not prove—that changing one's diet and exercise habits can protect against dementia. To investigate whether it is possible to delay the onset of dementia, we have to consider the long presymptomatic period that is typical of the various forms of dementia. Alzheimer's develops over probably 15 to 20 years before cognitive problems can be diagnosed. We might therefore need to follow people over an extensive period. Of course, it will also be necessary to decide at which point this type of study becomes too expensive and impractical to complete.
Another question we needed to address was whether someone experiencing the brain changes that precede actual cognitive complaints might be helped by counteracting the physiological alterations. Could changes to one's activities of the type implemented in FINGER push back the onset of cognitive issues? Postponing symptoms by two to five years would translate into a significant improvement in public health. Such a delay would mean that many people would probably not receive a dementia diagnosis, because they would die of other causes first.
To investigate some of these questions, we have put in place an extension of FINGER for another seven years. For this next phase, we plan to use brain scans to determine whether good habits might counteract the breakdown in connections among neurons and stem atrophy in certain brain areas, both hallmarks of Alzheimer's. Blood tests may pinpoint whether adopting behaviors that appear to improve cognition lessens inflammation, cellular stress and a deficiency of the proteins that help to ensure brain health—signs of pathology that often turn up in the postmortem brains of Alzheimer's patients.
We are also working with various research teams to bring together findings from studies similar to our own conducted in other countries. The comparisons can help determine whether our discoveries generalize to different populations—combining results can also increase the statistical power of the research and enable more detailed analyses of timely interventions. We could, for instance, compare the levels of physical training among intervention groups from the various studies to identify optimal levels to preserve brain health.
What we have learned from FINGER can also serve as a model for similar studies that attempt to mine the epidemiology literature to extrapolate multiple risk factors that can then be examined in a randomized controlled trial. We are now collaborating on two such projects: the European Union's Healthy Aging through Internet Counseling in the Elderly and the Multimodal Strategies to Promote a Healthy Brain in Aging.
It will not be necessary to wait another decade for health care professionals to start making recommendations to their patients. Already FINGER has provided enough evidence to start suggesting that patients take up the health measures we investigated. If the NIH decides to convene a new conference, it might now come to a more optimistic conclusion than the one held seven years ago that was unable to endorse any preventive steps.
The agency might also take assurances from recent reports indicating a decreasing rate of Alzheimer's in the U.S. and for all forms of dementia in both the U.S. and several European countries. This decline may stem from behavioral changes people have implemented on their own after hearing about scientific studies on such changes that can benefit cognitive health.
In the face of a multitude of drug failures, prevention may prove the best way to manage the dementia epidemic, as it has for many other chronic diseases. The take-home message from FINGER is that it may never be too early to take measures to prevent Alzheimer's—and fortunately, it may never be too late, either: changes to the way one lives seem to help some people even after cognitive decline has already begun.
Source URL: https://portside.org/2017-03-17/rare-success-against-alzheimers