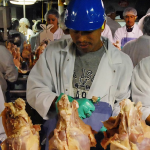 Since the election of 2016, much has been written about rural working-class voters who helped elect Donald J. Trump to the presidency.  Most of those stories have assumed that the rural working class is overwhelmingly white.  But if we look at one of the most significant parts of the rural economy – the poultry industry – we get a different picture. Not only do we see more workers of color, we also see more exploitation and greater potential for resistance.

The early leaders of the industrialized poultry trade in the 1950s were eager to avoid the unionized labor model that had developed in the 1930s in pork and beef packing towns like Chicago, Sioux City, and Kansas City.  Based in cities like Wilkesboro, North Carolina, Salisbury, Maryland, and Springdale, Arkansas, poultry producers benefited from mild climates that allowed for year-round production, enlisting farmers in the surrounding regions to raise their chicks as part of vertically integrated operations.  As of December 2016, 314 of the 426 commercial poultry slaughtering facilities in the United States were located in towns of less than 20,000 people and another 21 are located in unincorporated townships.

These small town poultry workers have received little attention, and recent efforts to explain the rural working class have been problematic at best.  In the past few years, for example, McDowell County, West Virginia has consistently been presented as the paradigmatic Appalachian backwater.  McDowell was the subject of a hearing by the US Senate Subcommittee on Health and Aging in 2013, as well as detailed profiles in the media before and after the election.

Focusing on places like McDowell perpetuates the image of rural America as populated primarily by people of white Western European origins, a narrative that fit the media’s interest in white rural working-class voters.  But while the economic suffering in McDowell might reflect the experiences of many working-class people outside of major metropolitan areas in the Trump era, McDowell’s whiteness is less representative.  In the ten U.S. counties with the lowest per capita income as of the 2010 census, whites constitute more than 61 percent of the population in only three. Whites are the minority in four of these counties.

In these rural communities, unemployment has never returned to pre-2008 levels, even though urban employment has grown significantly.  In an effort to alleviate continuing high unemployment, governors and state legislatures have offered considerable financial incentives to achieve the dubious boon of luring new poultry plants to their state or to help upgrade and keep existing facilities open.

Yet working conditions remain troubling in the industry. Standard practice at many poultry operators involves cycling through and then discarding injured workers.  In 1989, Southern Exposure investigated working conditions at Perdue Farms on Maryland’s Eastern Shore, making it one of the first publications to raise awareness of the growing epidemic of repetitive motion injuries sweeping through the meat and poultry workforce. Around the same time, Donna Bazemore, a production line worker from Georgia who had left her job with crippling carpal tunnel syndrome, gained notoriety when she testified before Congress about the hazardous and unhygienic production practices at Perdue. Changes in USDA rules in the 1980s allowed for a substantial increase in the line speeds in slaughterhouses, allowing companies to accelerate production from 50 birds per minute in the 1970s to 90 birds per minute. leading to what U.S. Representative Tom Lantos described repetitive motion injuries as “the major occupational epidemic of the 1990s.” Over the past decade, the Charlotte Observer, the Southern Poverty Law Center, and Oxfam America have all brought attention back to the industry’s ongoing problems.

At the same time, the workforce in poultry and meatpacking plants has shifted away from its African-American and Central American core in favor of international refugees.  Around one-third of the labor force today is foreign born, and even the North American Meat Institute has expressed concern at the Trump Administration’s attempted restrictions upon immigration from Muslim countries.

The poultry business reveals some of the human faces behind the travel ban through its increased employment of Iraqis, Somalis, and Syrians.  Displaced foreign workers don’t disembark at a New York City harbor as they did one hundred years ago; they arrive in rural resettlement centers in places like north Georgia and central Virginia.

In some cases, these workers are highly educated.  A Perdue production manager in Harrisonburg, Virginia described how a Bosnian worker wrote out the equations for the two cleaning chemicals the company was using and warned the manager that “when they came together [they] could be dangerous.”  This same manager had taken it upon himself to learn Spanish several years ago as well as a little Russian and Bosnian.  This encounter might be unusual, but it suggests some hope for an industry that is not impervious to pressure and public opprobrium.

Organizing these workers involves some challenges that progressives must overcome if they are to build some semblance of a coalition to defend workers’ rights.  This will require translating rhetorical support for immigrants into platforms that can advance common goals while also negotiating sometimes very differing cultural sensibilities.  It means listening and learning from immigrant workers and recognizing that their cooperation should be contingent upon them having the ability to shape the agenda and select their own leaders and spokespersons.

The Trump administration’s attempts to translate popular xenophobia into public policy means that the growth of this vital industry in small town America takes on a much greater importance than it appeared to six months ago.  Many have objected to the travel ban with the assertion that it goes against their notions of “what America represents.”  However, in the absence of a travel ban, would we be content with the status quo whereby immigrants and refugees are not welcomed but merely accepted and consigned to the most difficult and unpleasant jobs?  For generations of immigrants, this has been exactly “what America represents.”

Yet undertaking dangerous low-paid labor does not have to be treated as a rite of passage.  We can’t go back in time and change the legacy of Gilded Age employers, but by confronting the poultry business, we could disrupt a present course that threatens to reverse nearly a century of legal protections aimed at protecting the safety of industrial workers.  We have an opportunity to harness the abilities of rural activists and poultry workers and build connections among immigrant rights, food safety, and environmental organizations.  Achieving this would create a bulwark against the poultry companies’ exploitation and a greater movement for economic justice in the heart of “Trump Country.”

Patrick Dixon is a research analyst for the Kalmanovitz Initiative for Labor and the Working Poor at Georgetown University.