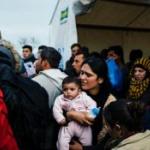 Trump’s policies against immigrants are an intensification of the Obama administration’s targeting of Central American refugees through raids going after women and children in January 2016 as well as using large scale family detention as a deterrence mechanism aimed at stopping others fearing for their lives from fleeing to the US.  The Trump administration is flagrantly exacerbating harmful U.S. immigration and foreign policies that have been implemented for over a century.

On February 1, 2017, the US and Honduras signed an agreement for the disbursement of the first $125 million dollars of the ''Alliance for Prosperity,'' a massive funding package originally touted as a ‘Plan Colombia’ for Central America.  The president of Honduras, who is running for re-election after the disabling of the articles in the Honduran Constitution that prohibit re-election, remarked that he was surprised just how quickly the Trump administration disbursed the funds.  The announcement of the $125 million distribution was a huge vote of confidence from the US, coming literally one day after Global Witness released a report entitled 'Honduras: The Deadliest place to defend the Planet.'  The report details how ''Honduras' political and business elites are using corrupt and criminal means to cash in on the country's natural wealth, and are enlisting the support of state forces to murder and terrorise the communities who dare to stand in their way.''  Rather than condemn the role of state security forces in murders and repression of those defending their land and environment from so-called ‘development’ projects, the US chooses to fund those same forces and promote more ‘development’.

The Obama Administration claimed the Alliance for Prosperity would address the plight of the large numbers of Central American children and families fleeing to the US, but the package appears to combine neoliberal economic policies and ‘security’ assistance, which will only further fuel migration, especially in Honduras where the police and military are frequently implicated in human rights abuses.  There is little transparency as to what exactly will be done with the money, but USAID appears to be playing a key role, with USAID signing the agreement with the Honduran government.  USAID’s prior work in Honduras includes a project in partnership with the hydroelectric dam company DESA, with the agreement signed by the very same executive now charged with the murder of Berta Caceres. This project is seen locally as a way of rewarding people who would accept the dam instead of protest violations of Indigenous rights.  After Berta's assassination, USAID canceled the project.

The Salvadoran press reported that USAID will channel the first $97.9 million received by El Salvador for the Alliance for Prosperity, and that the money will be used for projects such as those prioritized in FOMILENIO II.  FOMILENIO is the Millennium Challenge Fund, and CISPES has exposed how the US had originally made FOMILENIO II money for El Salvador dependent on privatization through a Public-Private Partnership Law, which “creates a mechanism to auction off public services and infrastructure to private corporations for management and partial ownership, from airports and highways to universities and municipal services.”

Dawn Paley writes in The Nation, ''the centerpiece of the Alliance for Prosperity involves tax breaks for corporate investors and new pipelines, highways, and power lines to speed resource extraction and streamline the process of import, assembly, and export at low-wage maquilas. These are the very things that community leaders in Central America are risking their lives to prevent."

State security forces in Honduras are involved in the threats, attacks, and murders of the activists protesting these neoliberal plans.  In this way, privatization and neoliberal economic plans go hand and hand with “security” funding of repressive state forces.  The Honduran President indicated the first disbursement of the money would also be used for security, “principally in the most difficult zones.” The Council on Hemispheric Affairs reported that ''it is estimated that more than 60 percent of the entire budget for the APP is going towards 'security measures.''  State security forces are all too often used to repress those who stand up against the turning over of their land and resources to corporations or elite businessmen.  In January of this year, Honduran leader Miriam Miranda, Coordinator of the Fraternal Black Organization of Honduras (OFRANEH), which has been defending ancestral Garifuna lands from tourism projects to benefit the elite, was stopped and threatened with jail by the Honduran police, despite the fact that the Inter-American Human Rights Commission has ordered the Honduran government to protect Miriam, not persecute her.  Just days later, police violently evicted a campesino community, shooting live bullets. Victor Vasquez, a leader of the Indigenous Lenca Movement of La PAZ (MILPAH), was shot and injured by state forces while filming the eviction.

March 2nd marked one year since the assassination of internationally recognized Indigenous activist Berta Caceres in Honduras.  Berta was one of those who sounded the alarm against the Alliance for Prosperity, calling it the ''new big package of privatizations by the Honduran and US governments against the Honduran people.''  When Central American government leaders gathered with US at the Indura Beach Resort – which is built on ancestral Garifuna land and exemplifies how communities can be evicted and criminalized to benefit ‘development’ projects and elite and corporate interests – to plan the Alliance for Prosperity in 2015, Berta alerted the Honduran social movements to organize to oppose it.  Today, as $125 million is being disbursed, Berta has conveniently been silenced.  Those who ordered Berta’s murder are still free, though the Honduran government has charged an Army Major and others with links to the military and US-trained forces as well as the hydroelectric dam company DESA with her murder, indicating precisely the problem with sending even more finances to the Honduran security forces and promoting economic ‘development’ such as the dam Berta opposed.

It is precisely the neoliberal economic policies promoted by the US and the financing of a repressive regime which serves US interests in Honduras that is fueling migration and creating refugees who flee to the US.  The Alliance for Prosperity will only exacerbate the problem.

The US should immediately cease financing and supporting repression in Honduras.  The Berta Caceres Human Rights in Honduras Act, HR 1299, introduced in the House on March 2 by Rep. Hank Johnson, would suspend US military/security assistance to Honduras until human rights violations by the Honduran security forces cease and those responsible are brought to justice.  Already 41 representatives have co-sponsored the bill, and it supported by a broad range of organizations.

Furthermore, instead of retraumatizing families who have often borne the brunt of the broken immigration and foreign policy system, the US government should respect and fulfill its international obligations and provide those who fear torture or have a well-founded fear of persecution a safe haven.  The federal government needs to immediately reverse the recently issued executive orders aimed at criminalizing and deporting refugees and immigrants, put a stop to raids, and ensure that migrants seeking a safe haven in this country are afforded a fair process to put forward their legal claims.

Brigitte Gynther is the Latin America Liaison with the School of Americas Watch.  She is based in Central America.

Azadeh Shahshahani is Legal & Advocacy Director with Project South and a past President of the National Lawyers Guild. You can follow her on Twitter @ashahshahani.