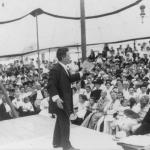 In September 2013, as the United States was gearing up for an attack on Syria following a United Nations-verified use of chemical weapons on civilians, I found myself backstage at an event with U.S. Senator Tammy Baldwin. With only the two of us in the room, I turned to her and said, “Please, when you go to vote [on the authorization for the use of military force], think about the fact that when the bombs fall, they are going to fall on someone.”

It seems almost simplistic, but so often our political rhetoric is abstract and devoid of consideration of the human victims of war. On Thursday, April 6, when he announced the launch of 59 Tomahawk cruise missiles targeting Al Shayrat airfield in Syria, President Donald Trump said: “Tonight, I ordered a targeted military strike on the airfield in Syria from where the chemical attack was launched.”

Trump’s “targeted strike” killed as many as nine civilians, including at least four children, according to reports from the Syrian Arab News Agency.

“This was not a small strike,” McMaster declared. But McMaster’s own history as a strong proponent of the 2007 “surge” in Iraq has been questioned by some in light of its long-term impact. The surge, while initially seeming to accomplish its goal of providing space for Iraqi national reconciliation, ultimately had little effect once the U.S. troops were gone. And today, U.S. troops are again being deployed in an apparently failing attempt to push ISIS out of Iraq.

President Trump blames the actions of the Syrian government on President Obama’s failure to act decisively in 2013, but Trump himself opposed attacking Syria in 2013 in a series of published tweets. One said: “What will we get for bombing Syria besides more debt and a possible long term conflict? Obama needs Congressional approval.” That same argument is now being raised in Congress following Trump’s unilateral attack Thursday night.

“While we all condemn the atrocities in Syria, the United States was not attacked,” stated Senator Rand Paul, Republican of Kentucky. “The President needs congressional authorization for military action as required by the Constitution, and I call on him to come to Congress for a proper debate.” He added, “Our prior interventions in this region have done nothing to make us safer, and Syria will be no different.”

California Democratic Representative Barbara Lee concurred: “This is an act of war. Congress needs to come back into session & hold a debate. Anything less is an abdication of our responsibility.”

The missile strike took place on the exact anniversary, one hundred years ago, of the United States’ entry into World War I. Writing in The Progressive in June 1917, in an article titled “The Right of the Citizen to Oppose War and the Right of Congress to Shape the War Policy,” Senator Robert M. La Follette said: ‘The war party in the United States seeks to justify our entrance into the bloody conflict on the ground that it is in the interest of democracy… . In times of peace, the war party insists on making preparation for war. As soon as prepared for war, it insists on making war. If there is no sufficient reason for war, the war party will make war on one pretext, then invent another, possibly more effective, pretext after war is on.”

This past week was also the fiftieth anniversary of the Reverend Dr. Martin Luther King Jr.’s April 4, 1967, speech at Riverside Church in New York. The speech, sometimes called “Beyond Vietnam” or “A Time to Break Silence,” was King’s call for an end to militarism in our culture. He said: “I knew that America would never invest the necessary funds or energies in rehabilitation of its poor so long as adventures like Vietnam continued to draw men and skills and money like some demonic destructive suction tube.”

King went on to say: “We can no longer afford to worship the god of hate or bow before the altar of retaliation. The oceans of history are made turbulent by the ever-rising tides of hate. And history is cluttered with the wreckage of nations and individuals that pursued this self-defeating path of hate.”

These are the sentiments that have guided The Progressive over the past 108 years. Hopefully the hundredth anniversary of the U.S. entry into WWI will not also be remembered as the day of our entry into a new, more deadly global conflict in 2017. As now-President Donald Trump himself ominously tweeted on September 5, 2013: “Russia is sending a fleet of ships to the Mediterranean. Obama’s war in Syria has the potential to widen into a worldwide conflict.”

The day after the U.S. airstrikes, Russian ships began moving into the region again. We would do well to remember: When the bombs fall, they are going to fall on someone.

Norman Stockwell is publisher of The Progressive. Previously, for over 20 years, he served as WORT Community Radio’s Operations Coordinator in Madison, Wisconsin. He also coordinated the IraqJournal website in 2002-2003. In 2011, he regularly reported on protests in Madison for Iran’s PressTV and other outlets.