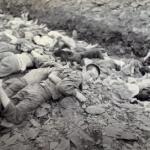 (The following article below is an extract from a forthcoming narrative/memoir, "Keeping On in Dark Times: Memories of Racial Justice and Antiwar struggles in the 1940s and 1950s.")