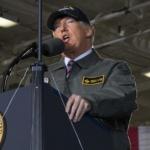 The recent U.S. attack on Syria and mega-bombing of Afghanistan come at a time when the Trump regime is facing a mounting scandal over alleged Russian involvement in its 2016 electoral campaign, historically low approval ratings for an incoming presidency, and a growing mass grassroots resistance movement. U.S. rulers have often launched military adventures abroad to deflect attention from political crises and problems of legitimacy at home.

Beyond Syria and Afghanistan, the Trump regime has quietly escalated military intervention throughout the Middle East and has proposed an increase of US$55 billion in the Pentagon budget. It has threatened military force in a number of hotspots around the world, including Syria, Iran, Southeast Asia, along NATO’s eastern flank and in the Korean Peninsula. As rival centers of power emerge in the international system any such military adventure could snowball into a global conflagration with devastating consequences for humanity.

Journalists and political observers have focused on geopolitical analysis in attempting to explain rising international tensions. While such analysis is important, there are deep structural dynamics in the global capitalist system that are pushing ruling groups towards war. The crisis of global capitalism is intensifying despite what we have heard from mainstream economists and elites giddy with recent growth spurts and the inflation of stock prices. In particular, the system is facing what appears to be an intractable structural crisis of overaccumulation and of legitimacy.

Cyclical crises, or recessions, occur about every 10 years in the capitalist system and typically last some 18 months. There were recessions in the early 1980s, the early 1990s, and the early 2000s. Structural crisis, so called because the only way out of crisis is to restructure the system, occur approximately every 40-50 years. A new wave of colonialism and imperialism resolved the first recorded structural crisis of the 1870s and 1880s. The next structural, the Great Depression of the 1930s, was resolved through a new type of redistributive capitalism, referred to as the “class compromise” of Fordism-Keynesianism, social democracy, New Deal capitalism, and so on.

Capital responded to the structural crisis of the 1970s by going global. The emerging transnational capitalist class, or TCC, promoted vast neoliberal restructuring, trade liberalization, and integration of the world economy. The global economy experienced a boom in the late 20th century as the former socialist countries entered the global market and as capital, liberated from nation-state constraints, unleashed a vast new round of accumulation worldwide. The TCC unloaded surpluses and resumed profit-making in the emerging globally integrated production and financial system through the acquisition of privatized assets, the extension of mining and agro-industrial investment on the heels of the displacement of hundreds of millions from the countryside, a new wave of industrial expansion assisted by the revolution in Computer and Information Technology (CIT).

Yet capitalist globalization has also resulted in unprecedented social polarization worldwide. According to the development agency Oxfam, just 1 percent of humanity owns over half of the world’s wealth and the top 20 percent own 94.5 of that wealth, while the remaining 80 percent must make due with just 4.5 percent.

Given such extreme polarization of income and wealth, the global market cannot absorb the output of the global economy. The global financial collapse of 2008 marked the onset of a new structural crisis of overaccumulation, which refers to accumulated capital that cannot find outlets for profitable reinvestment. Data from 2010 showed, for instance, that companies from the United States were sitting on $1.8 trillion in uninvested cash that year. Corporate profits have been at near record highs at the same time that corporate investment has declined.

As this uninvested capital accumulates, enormous pressures build up to find outlets for unloading the surplus. Capitalist groups, especially transnational finance capital, push states to create new opportunities for profit-making. Neoliberal states have turned to four mechanisms in recent years to help the TCC unload surplus and sustain accumulation in the face of stagnation.

One is the raiding and sacking of public budgets. Public finance has been reconfigured through austerity, bailouts, corporate subsidies, government debt and the global bond market as governments transfer wealth directly and indirectly from working people to the TCC.

A second is the expansion of credit to consumers and to governments, especially in the Global North, to sustain spending and consumption. In the United States, for instance, which has long been the “market of last resort” for the global economy, household debt is higher than it has been for almost all of postwar history. U.S. households owed in 2016 nearly US$13 trillion in student loans, credit card debt, auto loans and mortgages. Meanwhile, the global bond market – an indicator of total government debt worldwide – had already reached US$100 trillion by 2011.

A third is frenzied financial speculation. The global economy has been one big casino for transnational finance capital, as the gap between the productive economy and “fictitious capital” grows ever wider. Gross world product, or the total value of goods and services produced worldwide, stood at some US$75 trillion in 2015, whereas currency speculation alone amounted to US$5.3 trillion a day that year and the global derivatives market was estimated at a mind-boggling US$1.2 quadrillion.

All three of these financial mechanisms may resolve the problem momentarily but in the long run they end up aggravating the crisis of overaccumulation. The transfer of wealth from workers to capital further constricts the market, while debt-financed consumption and speculation increase the gap between the productive economy and “fictitious capital.” The result is ever-greater underlying instability in the global economy. Many now see a new crash as inevitable.

There is another mechanism that has sustained the global economy: militarized accumulation. Here there is a convergence around the system’s political need for social control and its economic need to perpetuate accumulation. Unprecedented global inequalities can only be sustained by ever more repressive and ubiquitous systems of social control and repression. Yet quite apart from political considerations, the TCC has acquired a vested interest in war, conflict, and repression as a means of accumulation. CIT has revolutionized warfare and the modalities of state-organized militarized accumulation, including the military application of vast new technologies and the further fusion of private accumulation with state militarization.

As war and state-sponsored repression become increasingly privatized, the interests of a broad array of capitalist groups shift the political, social, and ideological climate toward generating and sustaining social conflict – such as in the Middle East – and in expanding systems of warfare, repression, surveillance and social control. The so-called wars on drugs, terrorism, and immigrants; the construction of border walls, immigrant detention centers, and ever-growing prisons; the installation of mass surveillance systems, and the spread of private security guard and mercenary companies, have all become major sources of profit-making.

The U.S. state took advantage of the 9/11 attacks to militarize the global economy. U.S. military spending skyrocketed into the trillions of dollars through the “war on terrorism” and the invasions and occupations of Iraq and Afghanistan. The “creative destruction” of war acted to throw fresh firewood on the smoldering embers of a stagnant global economy. The Pentagon budget increased 91 percent in real terms between 1998 and 2011, and even apart from special war appropriations, it increased by nearly 50 percent in real terms during this period. In the decade from 2001 to 2011 defense industry profits nearly quadrupled. Worldwide, total defense outlays (military, intelligence agencies, Homeland Security/Defense) grew by 50 percent from 2006 to 2015, from $1.4 trillion to $2.03 trillion.

The cutting edge of accumulation in the “real economy” worldwide shifted from CIT before the dot-com bust of 1999-2001 to a military-security-industrial-financial complex – itself integrated into the high-tech conglomerate - that has accrued enormous influence in the halls of power in Washington and other political centers around the world. An emergent power bloc bringing together the global financial complex with the military-security-industrial complex appeared to crystallize in the wake of the 2008 collapse. The class interests of the TCC, geo-politics, and economics come together around militarized accumulation. The more the global economy comes to depend on militarization and conflict the greater the drive to war and the higher the stakes for humanity.

The day after Donald Trump’s electoral victory, the stock price of Corrections Corporation of America, the largest for-profit immigrant detention and prison company in the United States, soared 40 percent, given Trump’s promise to deport millions of immigrants. Military contractors such as Raytheon and Lockheed Martin report spikes each time there is a new flare-up in the Middle East conflict. Within hours of the April 6 tomahawk missile bombardment of Syria Raytheon stock increased by $1 billion. Hundreds of private firms from around the world have put in bids to construct Trump’s infamous U.S.-Mexico border wall.

Populist rhetoric aside, the Trump regime’s economic program constitutes neo-liberalism on steroids. Corporate tax cuts and deregulation will exacerbate overaccumulation and heighten the power bloc’s proclivity for military conflict. Politicized and increasingly autonomous generals and retired military officials that occupy numerous posts in the regime control the U.S. war machine. The generals may play a key role in geopolitical conjunctures and in the timing and circumstances around which U.S. intervention and war escalate. Yet behind the Trump regime and the Pentagon, the TCC seeks to sustain global accumulation through expanding militarization, conflict, and repression. This gives a built-in war drive to the current course of capitalist globalization. Only a worldwide push back from below, and ultimately a program to redistribute wealth and power downward, can counter the upward spiral of international conflagration.

William I. Robinson is a professor of Sociology at the University of California at Santa Barbara.