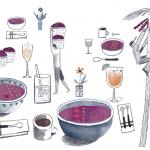 In the aisles of the American supermarket, hierarchies arise and collapse with the velocity of soap-opera drama. The produce section is especially cutthroat; here, because novel products are so rare, it’s the stories that must change to entice consumers. Back in the 1970s, the Chinese gooseberry went global — cultivated in New Zealand and shipped to the world — after being rechristened as the friendlier kiwi. Just a few years ago, kale was king, rehabbed as a luxury green after decades as a garnish and a Southern standby. Similarly, quinoa, long a staple crop in the Andes, has lately become a Western fixture, an ostensibly more primal alternative to rice. The latest entrant to this contest is Brazilian açaí, a purplish, antioxidant-rich stone fruit — though most call it a berry — foraged from trees in the Amazon River basin.

On an April Monday in Sherman Oaks, Calif., the Harvest Bar was packed with adults in athleisure, eating puréed açaí from bowls the size of flowerpots. The restaurant is a fast-casual “superfood cafe,” one in a growing class of health-food restaurants doing brisk trade in the açaí-bowl business, selling heaps of the puréed berries topped with diced fruit and other sweets. “The blend is like an ice cream,” the owner, Aric Haut, explained. “But healthy.” More than 5,000 miles to the south, harvesters in the Amazon basin of Brazil climb palm trees to pick the wild-growing fruit. What lies between these two distant parties is the latest unspooling of the food-fad plot — a supply chain driven by remarkable health claims, with money exchanged at every step along the way.

In the Amazon River basin, açaí — pronounced “ah-sah-EE” — has been eaten since at least the dawn of written history. The fruit, until the 1970s, was constrained to just this region, where local ribeirinhos, or “river people,” plucked it from trees and ate it as part of nearly every meal. As a weak jungle economy pushed ribeirinhos into cities, their gradual migration formed a distribution network. At first, they sold açaí from makeshift roadside carts. By the ’80s, they were shipping it to Rio and São Paulo, where it gained a reputation as prime fuel for jiu-jitsu. High in omega fats and low in carbohydrates and sugar, its sweet and earthy flesh is filling yet light. By the ’90s, Brazil had an açaí-bar scene. As the berry gained status, its price began to rise.

If the superfood plot were a bit more predetermined, you might expect açaí to go the way of quinoa. When the protein-rich grain spread to supermarket aisles and started to appear in fast-casual restaurants, it moved out of reach for the Bolivian farmers whose dependence on the grain made it famous in the first place. The story with açaí is not so simple. Here, surprising parties become heroes and scoundrels as the coveted berry changes hands in different ways.

Global consumption has further increased demand, but because of the high value of good vibes, some superfood exporters have an incentive to hew to best practices. Sambazon, the leading exporter of the berry, has emerged as an unlikely steward of the crop. The company’s chairman, Ryan Black, first tasted the fruit in the late ’90s, back when it was mostly unknown in America. Black, a jock with a stoner’s lilt, was a former football captain at the University of Colorado, Boulder. He has since cornered the açaí export market, in part by paying a guaranteed minimum price to harvesters, protecting wages from dipping too low. According to a sustainability study, workers along Sambazon’s vertical supply chain can earn up to three times what the average Brazilian takes home. Beyond taking pains to demonstrate that its harvest is sustainable, the company has begun funding local schools for agro-forestry education and even devoting some of its fair-trade funds to health and child-care services in the region.

Because of this, the açaí boom hasn’t created an easy narrative of exploitation. For urban consumers in cities like Belém, according to Black, the cost of açaí has risen sharply. To others, like the ribeirinhos, the trend has meant a sudden influx of cash, bringing capital (and flat screens) to isolated towns. For those who learn sustainable techniques, the boom could mean a long-term source of income for the region; for others driven to make a quick buck, the boom might remain just that — a boom.

As açaí mania has progressed, even multinationals have latched on to the trend, with both Coca-Cola and Pepsi now peddling açaí-tinged drinks. The berry, for now, remains harvested in the wild, but some who study sustainability in the region worry that increased demand for the crop might ultimately strain wild harvesting operations and result in large-scale açaí plantations. The same vibes that drive growth in the region might also destroy the same wholesome ethic that made açaí appealing to Americans in the first place. For us, it might not matter; we’ll probably have found a new superfood by then.

Jamie Lauren Keiles is a writer based in Los Angeles. She last wrote for the magazine about a 600-mile boat trip around the East Coast.