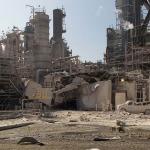 The damning findings of a Chemical Safety Board (CSB) review of the accident were made public earlier this month. Among some of the problems identified in the report: the refinery repeatedly violated ExxonMobil's corporate safety standards leading up to the incident, while multiple gaps existed in the refinery's safety systems.

"It was only sheer luck that the hydrofluoric acid tank wasn't hit," said Dr. Sally Hayati, president of the Torrance Refinery Action Alliance. If it had been hit, the collision could have released a toxic ground-hugging cloud with the potential to kill for nine miles and cause serious and irreversible injuries for up to 16 miles under worst-case scenario projections, she added.

"This is yet another symptom of how in our country we always put profit ahead of safety," Hayati said.

Just before Obama exited office, his Environmental Protection Agency (EPA) put in place a new federal rule setting tougher safety procedures at facilities covered by the EPA's Risk Management Program (RMP). The rule is designed to prevent accidents like the 2015 Torrance refinery explosion from happening again, and to better protect first-responders and the communities perched in the shadow of facilities that store and use potentially dangerous chemicals.

According to EPA data, over 1,500 accidents were reported by RMP facilities between 2004 and 2013, causing more than $2 billion in property damages.

The new rule was supposed to come into effect in March. But after a petition opposing the rule was filed by a coalition of trade associations, the EPA initially stayed its implementation for three months. Then, after various states and companies in the refining, oil and gas, chemical and manufacturing sector filed further petitions, the EPA proposed to extend the stay an additional 20 months -- until February 19, 2019 -- in order to win time to consider these various petitions, and to possibly "revise" the RMP amendments.

Fearing that the EPA under Scott Pruitt will take the side of industry and further delay, weaken or even try to abrogate the new rule entirely, a coalition of community groups, scientists and environmental organizations filed a motion to intervene in the lawsuit last month.

"We don't expect Pruitt to defend [the rule]," said Gordon Sommers, associate attorney with Earthjustice, who filed the motion on behalf of the coalition. In a letter to the EPA last year when still Oklahoma attorney general, Pruitt asked the agency to withdraw the rule, citing national security concerns.

"We know where he stands and we know that his arguments are the same arguments that the big industries are making," said Sommers. "We know his priority is not protecting these communities."

The new rule -- the first significant updates to the RMP in some 20 years -- impacts roughly 12,500 facilities, including oil refineries, large chemical manufacturers, pulp and paper mills, and even wastewater treatment plants and food packing plants. And it addresses plant safety in a number of critical areas, such as emergency response, accident prevention and information disclosure.

After an accident occurs, for example, facilities are required to conduct more thorough investigations to better understand what caused them. In some cases, an independent third party must be brought in to conduct its own audit. Facilities must be more transparent about certain information critical for first responders and local residents, such as what chemicals are stored on site. And as is pointed out in the amendment, "one of the factors that can contribute to the severity of chemical accidents is a lack of effective coordination between a facility and local emergency responders." As such, facilities are required to better coordinate with first responders and local emergency planning committees.

In an email to Truthout, an EPA spokesperson wrote that the proposal to further delay the effective date of the amendments will allow the agency time to consider other issues that may benefit from additional public input, and ensure that "all provisions in the RMP Amendments are in accordance with the explicit mandate granted to EPA by Congress."

But environmental groups consider the new rule, which was finalized after more than three years of negotiations, watered down as it is. And they argue that any delay or further weakening of the rule will unfairly impact fenceline communities around the nation's chemical plants and refineries -- communities that are disproportionately Black, Brown and poor.

"We are really setting ourselves up for what we're calling in our communities the potential for environmental genocide," said Michele Roberts, national co-coordinator of the Environmental Justice Health Alliance. "If we really want to make American great 'again,' then why not honor our commitment to letting everyone live in a healthy and thriving community and environment."

Schools in the Shadows of Refineries

At 6:33 p.m. on the evening of August 12, 2012, flammable gas seeping from a ruptured pipe at the Chevron refinery in Richmond, California, caught alight, triggering a huge blast that sent 18 employees running for cover, and another fleeing to a fire engine, just in time to avoid a fireball that engulfed the truck. The surrounding community was placed on a level 3 alert -- the most serious of community warning alerts. And in the weeks that followed, some 15,000 people from the surrounding communities sought medical treatment for health problems like chest pains, shortness of breath, sore throats and headaches.

The subsequent CSB investigation found all sorts of systemic failures at the refinery, including with its emergency response system the day of the incident. The CSB also found broader industry deficiencies relating to comprehensive inspection, effective facility upgrades and minimum safety requirements.

But the Richmond incident is just one example of the sorts of accidents that happen routinely at chemical facilities every year. According to EPA data, the more than 1,500 reported accidents reported by RMP facilities between 2004-2013 caused nearly 60 deaths. Some 17,000 people were injured or needed medical treatment, with almost 500,000 people needing to be evacuated or kept indoors. The research institute Swiss Re found recently that the US has three to four times the accident rate of the European refinery industry, where regulations are more stringent.

A 2014 Center for Effective Government report also found that at least one third of America's schoolchildren attends a school within the vulnerability zone of a high-risk RMP chemical facility. Half of those students (over 10.3 million schoolchildren) are in schools located in more than one chemical vulnerability zone. Indeed, a number of metro areas -- including Beaumont-Port Arthur, Texas; Baton Rouge, Louisiana; Memphis, Tennessee and Wilmington, Delaware -- contain many schools in multiple vulnerability zones, according to the same report.

Houston, the beating heart of the nation's petrochemical industry, is another densely populated area where many schools sit in the shadow of multiple RMP facilities. An eight-part Houston Chronicle investigation started last year reveals how hundreds of potentially dangerous chemicals stored at facilities across greater Houston go largely unmonitored at all levels of government. According to Stephanie Thomas, who lives in the outskirts of Houston, and is a member of the Healthy Port Communities Coalition, residents living at the fenceline of RMP facilities in her area are largely unaware of the sorts of chemicals being stored on their doorstep.

"I have been feeling much more concerned about something happening because there's just not enough communication about what's going on," said Thomas, a geologist who previously worked in oil and gas exploration for companies like Chevron. "This is really serious stuff that we're dealing with in Houston."

Only, those who oppose the rule argue that it's in the nation's security interests to allow companies to keep secret portions of their chemical inventory. Truthout reached out to the American Chemistry Council (ACC) -- one of the groups that filed a petition against the new rule. Though the organization declined an interview, it forwarded a transcript of comments made by an ACC spokesperson at a Washington hearing on the new rule last month.

In the statement provided, the spokesperson said the new information requirements could leave chemical facilities and communities vulnerable to those with "ill intent," and that the new rule lacked requirements that would actually improve safety. Proponents of the rule have mischaracterized a fatal 2013 explosion of ammonium nitrate at a fertilizer plant in West, Texas, the spokesperson also argued.

That accident caught then president Obama's attention, and spearheaded the push for RMP reform. But because the accident was found to have been started deliberately, and because ammonium nitrate isn't one of the substances regulated under the RMP, the ACC spokesperson argued that the rule "does virtually nothing to prevent a similar West, Texas event from happening in the future."

Others see it differently.

That chemicals like ammonium nitrate don't fall under the auspices of the RMP is "just another example of how weak the regulations are," said Neil Carman, Clean Air program director with the Sierra Club and a former Texas Commission on Environmental Quality investigator.

He described as "pure bunk" the claim that "national security interests" trump the need for chemical plants to be more transparent about what chemicals they're using and storing. This justification has been widely promulgated since the 9/11 terror attacks.

"The problem's not with terrorists," Carman said. "The problem is, you've got hundreds of thousands of people living on the fenceline of chemical plants in Texas alone."

A 2008 report found that upwards of 80 million Americans live within range of a worst-case toxic gas release from at least one of the 101 most hazardous chemical facilities nationwide.

The new rule came together only after more than three years of deliberations, multiple public comment periods, as well as input and analysis from a variety of stakeholders, including industry groups. It gives teeth to what's referred to as the Bhopal provisions -- the 1990 amendments to the Clean Air Act that established the RMP.

In 1984, an accident at a pesticide plant in Bhopal, India, released at least 30 tons of highly toxic gas into the surrounding neighborhood, mostly shanty towns. The accident affected an estimated 600,000 people in that night alone and killed an estimated 15,000 over the years. The sheer magnitude of the disaster shocked US lawmakers into tightening safety standards at chemical plants on home soils. In 1990, the Bhopal amendment sought, among other things, to obligate plants to switch to safer processes if necessary to prevent catastrophic releases of their own from occurring. But when the EPA moved to enact this clause in the wake of 9/11, the George W. Bush administration quashed the proposals.

And now, all these years later, the "very least" that can be done to ensure the safety of fenceline communities -- particularly those in urban neighborhoods, where emergency escape routes can be limited -- is to implement the "modest amendments" outlined in the new rule, said Charise Johnson, research associate at the Union of Concerned Scientists.

"Putting the stay on the RMP amendment is really just putting local communities and first responders at risk," she said. "I think this is a pretty blatant example of environmental injustice, and we need to keep amplifying these community voices."

Daniel Ross is an LA-based journalist with bylines in Truthout, The Guardian, FairWarning, Newsweek, YES! Magazine, Salon, Vice and a number of other publications.