Ways to Juice Up the Labor Movement; Labor Once Again Becomes Part of the National Conversation 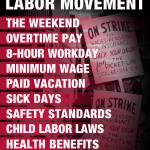