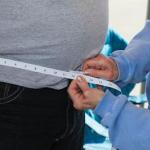 Employer-created wellness programs are about what workers should do on their own time, not what the employer could do to stop making them sick at work. Photo: Jim West, jimwestphoto.com