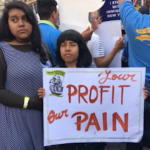 Conservatives have long had a monopoly on the love of states' rights and local government, but in Trump's America, it's the left that has seized the opportunities of what Supreme Court Justice Louis Brandeis called "laboratories of democracy." Even as the Dakota Access Pipeline inches toward completion, multiple cities including Seattle, San Francisco, Albuquerque, Raleigh, and Philadelphia have spoken with their wallets, severing ties with the oil pipeline-funding banks—in particular, Wells Fargo.

On May 31, New York City became the latest city to join the effort, when Mayor Bill de Blasio and comptroller Scott Stringer announced that they will vote to stop New York City from entering into new contracts with Wells Fargo and strip the bank of its role as book-running manager for NYC's General Obligation and Transitional Finance Authority bond sales.

Seattle was at the forefront of the movement back in February, when a coalition of activists convinced the city council to pass an ordinance that, as the Nation explained, "would effectively bar the local government from doing business with or investing in Wells Fargo in the future. It was an ambitious ask: Seattle was deeply intertwined with the bank, cycling about $3 billion through the institution each year."

Organizers hoped their efforts would be an inspiration for other cities. “We knew if we succeeded here, we could create ripple effects in other communities around the country,” Matt Remle, a Seattle organizer and member of the Standing Rock Sioux Tribe, told the Nation in March.

New York lagged behind other West Coast cities that were quicker to divest, but activists applauded the decision. “Wells Fargo’s practices to hurt immigrants, workers, consumers, and communities have distinguished the bank as one of America’s worst corporate actors," said Deborah Axt, co-executive director of Make the Road New York, an immigrant advocacy organization, in a statement. "That’s why, over the past month, thousands of New Yorkers and Americans across the rest of the country have stood up to them as a Corporate Backer of Hate and why we applaud the mayor and the comptroller for taking this decisive action to stop doing business with them."

On the same day as New York, Berkeley City Council in California passed another plan for Wells Fargo divestment. The current contract, the Daily Californian reported, will expire in May 2018, instead of 2020, as previously written, and "The city manager will now make semi-annual progress reports to council on new banking service contracts, aimed toward institutions in line with responsible banking policies, according to the agenda item."

The initial cities' divested funds are a drop in the bucket of Wells Fargo's $1.2 trillion in annual deposits, but it's an important start in a movement that started after the election and is still racking up victories as recently as late May. Earlier last week, the bank was ranked last on a Barron's survey, the 100 "Most Respected American Companies."

Other cities interested in divestment can read a free strategy guide created by Seattle activists.

Ilana Novick is an AlterNet contributing writer and production editor.