The Status of Black Women in the United States 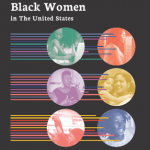 Black women are integral to the well-being of their families, their communities and the nation as a whole. Through their work, entrepreneurship, caregiving, political participation, and more, Black women are creating opportunities for themselves, their loved ones, and improving the our economy and society. They have all the makings of what should be success, yet their contributions are undervalued and under compensated. Black domestic workers are particularly vulnerable because of the ways in which racial disparities, gender discrimination, and immigration status serve to further marginalize and disempower the very people who power our economy and push our democracy to be the best that it can be. Whether one examines Black women’s access to healthcare, earnings, or access to much needed social supports like childcare and eldercare, Black women are getting the short end of the stick, despite having contributed so much to the building of this nation.

We are proud to share The Status of Black Women in the United States, a comprehensive report the from the Institute for Women’s Policy Research (IWPR), and builds on IWPR’s longstanding report series, The Status of Women in the States. The report was produced in collaboration with the National Domestic Workers Alliance’s work to amplify the historical and current contributions of Black domestic workers to the broader domestic worker movement. It is our hope that this research supports on the ground organizing work across the nation, and helps form the basis for new policy, practice and legislation that supports the well-being of Black caregivers, so that all caregivers can be cared for in return. Using available data, we have attempted to paint a picture of the lived experiences of millions of Black women across the United State, and offers recommendations where the opportunities for Black women can be truly realized.

The report analyzes data by gender, race and ethnicity for all 50 states and the District of Columbia across six topical areas: political participation, employment and earnings, work and family, poverty and opportunity, health and well-being, and violence and safety. In addition, the report includes basic demographic data for each state and a set of policy recommendations. It was funded by the National Domestic Workers Alliance, with additional funding provided by the NoVo Foundation and the Ford Foundation.

Black women vote at comparatively high rates and had a higher voting rate than all other groups of men and women during the last two presidential elections but remain underrepresented at every level of federal and state political office.

More than sixty percent of Black women are in the workforce, making them one of the two racial/ethnic groups of women with the highest labor force participation rate, but their earnings lag behind most women’s and men’s earnings in the U.S.

Black families depend on Black women’s earnings. Over 80 percent of Black mothers are breadwinners, yet many have caregiving responsibilities for an elderly parent, a person with a disability, or a young child, which they must balance with work obligations.

States can help Black women stay in their jobs and advance in their careers by enacting policies such as paid family and medical leave and paid sick days, which can help workers balance their family care responsibilities with the demands of their jobs.

While health insurance coverage rates have increased substantially due to the implementation of the 2010 Patient Protection and Affordable Care Act (ACA), 16.5 percent of non-elderly Black women in the United States still lacked coverage as of 2014.

Black women experience poverty at higher rates than Black men and women from all other racial/ethnic groups except Native American women.

Policymakers and workforce development leaders should adopt strategies to promote gender and racial/ethnic equity in access to higher-paid career training opportunities. Workforce development programs that recruit and train Black women in specific skills can help them gain access to career ladders and upward mobility and can reduce their concentration in lower-paying jobs.