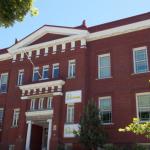 Middle school teachers at a charter school in Columbia Heights have voted to unionize, forming the first collective bargaining unit at a charter school in the district. The teachers at Cesar Chavez Prep Middle School voted 31-2 in favor of joining the American Federation of Teachers.
“We’re excited for the opportunity to work alongside our school board and our principal to make a school that we’re really proud of into the envy of the district,” said Christian Herr, science teacher at the school. “We’ve ready to get to work on a contract that makes our school an even better place to teach and learn.”
The educators organized through the District of Columbia Alliance of Charter Teachers and Staff, which is affiliated with the American Federation of Teachers, one of two major education unions in the country. Staff at the school say they want to unionize to give teachers a voice in decision-making. Jenny Tomlinson, the school librarian, told WAMU in May that staff hoped unionizing would reduce teacher turnover, increase teacher input in the curriculum and attract more experienced teachers.
Charter schools receive public money but operate independently. They do not usually unionize. Opponents of unions say that, without them, charter schools can be more flexible about salaries, hiring and firing, curriculum, and even the length of the school year. Nationally, 10 percent of charter schools are unionized, according to a report from the Center for Education Reform.
In a letter to staff and families, the Chavez school board said it respects the choice that teachers and staff have made. “Having the name of legendary union organizer and civil rights activities Cesar Chavez on our doors for nearly 20 years has never been a statement of support or opposition to unionization,” the board wrote. “It’s a statement of belief in the responsibility and power in all of us to improve the lives of others.”
For years, AFT has opposed charter schools, arguing they take money away from traditional public schools. But as the number of charter schools increase, unions are looking to increase membership by trying to organize charter teachers in other cities across the country.
The union’s national leadership hailed the D.C. school’s vote.
“Just like their school’s namesake, Cesar Chavez, these educators are joining together to win a real say over the decisions that affect their students and their work lives,” said Randi Weingarten, president of AFT. “Their goal is to force a meaningful and productive partnership with the administration to improve curriculum and create a fair and safe learning environment for the long term.”
AFT represents 234 charter schools in 15 states, and, now, the District of Columbia. An effort earlier this year to unionize another charter school in the District, the Paul School, was halted before teachers and staff could vote.
Next, the Chavez school board and union representatives will enter a collective bargaining process to agree on a contract.
Source URL: https://portside.org/2017-06-25/dc-charter-schools-get-first-union