Stamped from the Beginning: Ibram X. Kendi on the History of Racist Ideas in U.S. 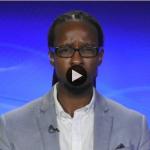 AMY GOODMAN: This is Democracy Now!, democracynow.org, The War and Peace Report. I’m Amy Goodman. We’re joined today by historian Ibram X. Kendi, professor of history and international relations, founding director of the Anti-Racist Research and Policy Center at American University. He just left the University of Florida at Gainesville. He is the author of the National Book Award-winning Stamped from the Beginning: The Definitive History of Racist Ideas in America.

If you could take us through your thesis, Professor Kendi, as you raise the profile of five figures through history, right through today, Angela Davis, and talk about their role in our history?

And so I chronicle this history through five major characters. And the first character is Cotton Mather, who was a Boston theologian, who, at the time—he lived from the 1660s to the 1720s—race or racial ideas were largely theological ideas, because theological ideas were largely scientific ideas. And so, he was involved in popularizing many of the early theological ideas justifying or making the case for black inferiority. By the emergence of the United States, the racial discourse became more secular, and particularly through the role of Thomas Jefferson. And Thomas Jefferson died on the eve of the abolitionist movement—Thomas Jefferson being the second major character in the text—and that abolitionist movement was largely spearheaded by William Lloyd Garrison, who of course was the third major character. And W.E.B. Du Bois was the fourth major character. He, of course, was one of the sort of fathers of civil rights and black power. And the last major character, that covers the last 50 years, where mass incarceration, in particular, became front and center, was Angela Davis.

AMY GOODMAN: And so, talk about, from Cotton Mather to Angela Davis, how they embodied your idea of how racist policies and ideas develop.

IBRAM X. KENDI: So, in the case of Cotton Mather, Cotton Mather was involved in probably the first great American debate over race, which was whether black people could become Christians. And slaveholders who were also Christian made the case that black people were too barbaric. Cotton Mather, being a major Boston theologian, being a major minister wanting to have a new group of people to proselytize to, made the case that they can be Christianized, because their souls have the capacity to be white, even though their bodies are black and inferior and worthy of enslavement. And so, this debate, he made this case for this debate because he wanted to open up the sort of reins on the church to be able—particularly the Puritan church, to be able to proselytize to black people. So he had this sort of hidden self-interest, this hidden cultural self-interest, that led to his idea.

And, you know, Thomas Jefferson, as many of you would understand, I mean, he was a slaveholder who, of course, wanted to create ideas that allowed him to continue slaveholding.

AMY GOODMAN: You write very poignantly in the prologue to Stamped from the Beginning, "I somehow managed to write this book between the heartbreaks of Trayvon Martin and Rekia Boyd and Michael Brown and Freddie Gray and the Charleston 9 and Sandra Bland, heartbreaks that are a product of America’s history of racist ideas as much as this history book of racist ideas is a product of these heartbreaks. Young Black males were twenty-one times more likely to be killed by police than their white counterparts between 2010 and 2012, according to federal statistics." And you go on to say, "The under-recorded, under-analyzed racial disparities between female victims of lethal police force may be even greater. Federal data show [that] the median wealth of White households is a staggering thirteen times the median wealth of Black households—and Black people are five times more likely to be incarcerated than Whites." Talk more about this.

On the other side of the debate has been the anti-racist position. The anti-racist position states that the racial groups are equal. There’s nothing wrong or right about black people or any other racial group of people. So, because the racial groups are equal, it must—these disparities, these inequities must be the result of racial discrimination. So they spend their time challenging racial discrimination.

And then the third position, which is called the assimilationist position, actually argues both. Typically and historically, they’ve stated that, yes, there is racial discrimination, but there’s also something wrong and inferior about black people. And so, they’ve sought to civilize and develop black people at the same time they were challenging racial discrimination.

AMY GOODMAN: So talk about where Black Lives Matter fits into this picture, the organizing from the grassroots up, and where you see it going.

And so, I’m hoping, and I’m sure many people are hoping, that Black Lives Matter and many other activists, anti-racist activists, who have been inspired by Black Lives Matter, and other types of activists will recognize the anti-racist position, which is that either the racial groups are equal or they’re not. And if you believe that the racial groups are not equal, that there’s something wrong or inferior about black people, that that’s a racist idea. And so you cannot continue to imagine that this nation is post-racial at the same time that you don’t believe that the racial groups are equal, that you’re championing policies that actually discriminate against black people.

AMY GOODMAN: Talking to historian Ibram X. Kendi. His book won the National Book Award, Stamped from the Beginning: The Definitive History of Racist Ideas in America. And you talk about overall racial inequities, from everything from wealth to health. Certainly, when we look at what’s happening right now in the Senate, though the healthcare bill has been put off for the moment, now opposed by nine Republicans, who run the political spectrum, feeling that regulations—like, what, Senator Paul of Kentucky—have to be stricter, that Medicaid and other healthcare policies and safety nets have to be dismantled, to those who feel that this is way too stringent. But always at the bottom of this you have the most vulnerable in society. So talk about from wealth to health, Professor Kendi.

IBRAM X. KENDI: So, I mean, from wealth, I mean, the Great Recession, some have made the case, was one of the largest losses of black wealth in American history, one of the largest losses of Latino wealth in American history, that when we have these major economic catastrophes, you know, those people who are the most sort of underprivileged are most likely to lose out.

But I think the healthcare debate and, really, argument, I think, is even more indicative, you know, of what we’re talking about. I mean, the Affordable Care Act led to 11 percent more black and Latino people becoming insured, which is a dramatic sort of development within black America, within Latino America. And so, more—it eliminated these massive disparities—or, I mean, eliminated—reduced these disparities between racial groups that are uninsured. And so, you know, to think about a new healthcare bill that’s going to reduce the number of people who—I’m sorry, increase the number of people who are uninsured, I mean, many of those people are probably going to be black or Latino, and then, therefore, we’re going to have an increase in these disparities. And then what racist ideas will say is, "Well, it’s those black people’s fault. It’s those Latinos’ fault. You know, they should be working harder. There’s something wrong with them." And so, they’ll create racist ideas to justify those disparities.

And I should also say that, you know, I think one of the most consequential manifestations in this country that black life does not matter is the disparity between how long black people live. I mean, white people are more like three-and-a-half—have a lifespan of three-and-a-half years in this country. And I think, you know, many of these things sort of result in that, including people having access to healthcare.

AMY GOODMAN: You’re writing a new book on how to be an anti-racist, which will be released next year. Can you give us a little preview?

AMY GOODMAN: I was just saying, you’re writing a new book, How to Be an Anti-Racist.

AMY GOODMAN: Give us a preview.

IBRAM X. KENDI: Sure. So, I mention in the prologue of Stamped from the Beginning that, you know, before I could chronicle anyone else’s racist ideas, I first had to come to grips with my own. And so, really, in How to Be an Anti-Racist, I want to sort of chronicle my journey, my personal journey, of really, you know, being raised and consuming many racist ideas to seeking to become somebody who is an anti-racist. And so I begin the book with a speech that I gave in high school, in which I uttered all of these racist ideas, all of these things stating that there’s something wrong with black people. And I take readers through my own personal journey, while simultaneously revealing many of the concepts of what it means to be an anti-racist.

AMY GOODMAN: Finally, Ibram X. Kendi, can you tell us the origins of your name?

IBRAM X. KENDI: Sure. So, Ibram is—was given to me by my parents. It means "exalted father." It’s a derivative of Abraham. Came up in a Christian church—I mean, a Christian family. My parents were part of the black theology movement in the early ’70s. And my last name, Kendi, my wife and I, when we wed in 2003, we decided to choose a name together. And so, Kendi is a Meru, in Kenya, name that means "loved one."

AMY GOODMAN: And you unveiled this at your wedding to your family and friends?

AMY GOODMAN: Well, Ibram X. Kendi, I want to thank for you being with us, professor of history and international relations and founding director of the Anti-Racist Research and Policy Center at American University. He’s just leaving the University of Florida at [Gainesville]. He’s the author of Stamped from the Beginning: The Definitive History of Racist Ideas in America, which is winner of the 2016 National Book Award.