Murphy Oil May Be The Last Workers’ Rights Case 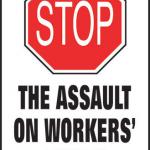 Yesterday, the National Labor Relations Board (NLRB) filed its brief in NLRB v. Murphy Oil, which will be argued in the Supreme Court in October. The case will determine whether mandatory arbitration agreements with individual workers that prevent them from pursuing work-related claims collectively are prohibited by the National Labor Relations Act (NLRA). The brief makes clear what is at stake for workers if the Supreme Court were to rule against the NLRB in this matter.

The NLRA guarantees workers the right to stand together for “mutual aid and protection” when seeking to improve their wages and working conditions. Employer interference with this right is prohibited. However, increasingly, employers are requiring workers to sign arbitration agreements that force them to waive their rights to collective actions, and handle workplace disputes as individuals. In practice, that means that even if many workers faced the same type of dispute at work, each individual employee must hire their own lawyer, and must resolve their disputes out of court, behind closed doors, with only their employer and a private arbitrator. The NLRB has found these forced arbitration agreements interfere with workers’ right to engage in concerted activity for their mutual aid and protection, in violation of the NLRA.

Corporate interests and the Trump administration are fighting the NLRB. They are focusing their argument on the Federal Arbitration Act (FAA), which requires courts to enforce arbitration agreements, subject to contract defenses. However, the Supreme Court has never issued a decision under the FAA enforcing an arbitration agreement that violates an express prohibition in another federal statute. That is what corporate interests arguing against the NLRB are asking the Court to do in this case. If they succeed, they will, as the NLRB argues in its brief, be using “private contracts to eviscerate the public rights Congress protected in the NLRA.” For workers, this will mean that we can be required to waive our NLRA rights as a condition of employment and that we will be left to individually arbitrate workplace disputes. Workers depend on collective and class actions to enforce many workplace rights. Employment class actions have helped to combat race and sex discrimination and are fundamental to the enforcement of wage and hour standards. Without the ability to aggregate claims, it would be very difficult if not impossible for workers to find legal representation in these matters.

Many significant cases dealing with workers’ rights have been brought as collective or class actions. So, if the Court is persuaded by corporate interests and the Trump administration in this matter, Murphy Oil may be the last workers’ rights case the Supreme Court has the opportunity to consider for the foreseeable future.