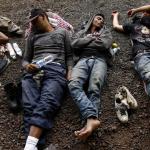 During the US presidential campaign, Donald Trump attacked Mexico and promised to build a wall to stop migrants fleeing violence and extreme poverty. Although the construction of a border wall has stalled, the new administration is deepening the existing strategy of stopping Central American migrants before they reach the US-Mexico border.

A formal relaunch of US-led regional cooperation took place in Miami over three days in June at the Conference on Prosperity and Security in Central America, hosted by the US Department of State and the US Department of Homeland Security. But it is the Inter-American Development Bank (IDB) and the US Chamber of Commerce that are at the centre of efforts to improve the economic fortunes of the region, with promises of an “investment shock” to create jobs for would-be Central American migrants.

In a region beset by violence against workers and a legacy of economic exploitation without development, concern is growing that the Bank is inadequately prepared to ensure inclusive economic growth and basic rights. The IDB lags behind similar institutions in establishing a labour safeguard to protect working people.

Just months after a surge of child migrants made headlines in 2014, leaders from Guatemala, Honduras and El Salvador joined then US Vice President Joe Biden at the headquarters of the IDB to release the Plan of the Alliance for Prosperity in the Northern Triangle. Although formally led by the governments of the three Central American countries (collectively known as the Northern Triangle), with the IDB as secretariat, the US government casts a long shadow. The US is the largest shareholder in the IDB, controlling 30 per cent of the votes on its board.

The Alliance for Prosperity joins a long line of US-led efforts in Central and Latin America including Plan Puebla Panama, which faltered amid local resistance to megaprojects meant to facilitate free trade.

Alongside similar measures, the Alliance for Prosperity Plan calls for special economic zones and public-private partnerships, which often result in the violation of labour rights in supply chains and the harnessing of public goods for private profit. Trade unions and civil society criticised the Plan for reinforcing “the same economic policies that have resulted in skyrocketing inequality, widespread abuse of workers’ rights and increased violence against labor leaders, and forced displacement throughout Mesoamerica”.

In an editorial published during the Miami Conference, US Secretary of State Rex Tillerson, Secretary of Homeland Security John Kelly and IDB President Luis Moreno pointed to Plan Colombia as a model for the Northern Triangle. But Plan Colombia used billions of drug war dollars to fuel forced displacement and widespread human rights abuses by security forces.

The growing militarisation of border security

The Conference emerged from February 2017 meetings between Tillerson, Kelly and Mexican government officials. Moving past the adversarial rhetoric of the election, the two governments found common cause on Central American security. The Conference was officially co-hosted by the Government of Mexico and the final day of discussions was held inside the headquarters of the US military’s Southern Command.

Alongside infrastructure and energy ventures, the IDB is promoting 35 border management projects in the renewed Alliance for Prosperity. This supports the interests of the US and Mexican governments in sealing the Mexico-Guatemala border and stepping up controls inside Central America. Despite limiting freedom of movement for people, the projects seek to facilitate the flow of goods.

Security forces in the Northern Triangle have been linked to violence against human rights defenders including the Honduran indigenous leader Berta Cáceres, who was killed in 2016 for leading the resistance to a hydropower dam. Two of the suspects in her death received military training in the US.

The Jesuit Migration Network of Central America and North America raised concerns that the Conference would “address prosperity from a lens that is purely economic and informed by the private sector,” with an approach to security that “ignores human rights and further militarizes borders.” The greater focus on security and the private sector comes as the Trump administration seeks to cut aid to Central America.

Just prior to the two days of government meetings in Miami, the IDB and the US Chamber of Commerce hosted an invite-only meeting that featured attendance from business representatives including Walmart, Monsanto and Coca-Cola.

The controversial Chamber often interferes around the world to undermine labour standards, and has pursued a political agenda in the United States that has alienated some corporations, including Unilever and Apple. Several companies publicly left the Chamber over the organisation’s opposition to addressing climate change.

Consistent with its hard line approach, the Chamber criticises the Northern Triangle governments for failing to make the region friendlier to foreign investors.

Despite rhetoric to the contrary, the Chamber agrees that the private sector should spur what IDB President Moreno called “a fundamental investment shock such that they can retain the numbers of people who are leaving their countries.” His rhetoric recalls the use of so-called shock therapy in Pinochet’s Chile and post-Soviet eastern Europe to rapidly institute structural adjustment, including privatisation.

In Miami, Secretary of State Tillerson repeatedly pointed to the Trump administration’s interest in advancing American exports and economic interests through the Alliance for Prosperity. Protecting business interests has long been the goal of US foreign policy in Latin America and the justification for intervention against democratically-elected governments.

The meeting in Miami debuted a new approach by the IDB, which loaned US$850 million to Northern Triangle governments to support the 2014 Plan. Now, the Bank will work with the three governments to design investment vehicles, such as private investment funds. The IDB will help design energy, transportation and border projects that are attractive toward private capital and provide $750 million in initial funding. Most money will come from private investors and governments, which together pledged $1.75 billion in Miami.

The approach of focusing on project design and initial funding, rather than robust public and multilateral investment, is consistent with a turn in development finance toward the private sector through ‘cascading’ and ‘blended finance.’

Americas Business Dialogue, an initiative of the IDB that involves the US Chamber of Commerce and others, agreed in Miami to establish a Northern Triangle working group. The private sector agenda for the Northern Triangle will further develop in September at the Americas Competitiveness Forum on ‘Structural Adjustment and Entrepreneurship’.

The types of megaprojects proposed under the renewed Alliance for Prosperity can lead to construction sites where workers are exposed to unsafe conditions and denied the right to form a union.

Unlike other multilateral development banks, the IDB has not taken steps to ensure that funded projects protect the basic rights of workers. In 2006 the International Finance Corporation established Performance Standard 2 to ensure respect for health and safety, freedom of association, child labour prohibitions and other universal standards. The European Bank for Reconstruction and Development followed suit in 2008, the African Development Bank in 2013 and the World Bank in 2016.

These policies have been successfully used by workers to address safety risks at job sites, assert their fundamental right to form a trade union and help prevent the use of public development funds to enrich irresponsible corporations. In 2006, the IDB wrote guidance for staff regarding labour in infrastructure projects, but refused to designate requirements or take an official position.

Violence against trade unionists and workers in the Northern Triangle is amongst the worst in the world. In 2013, on the eve of the migrant surge, Guatemala was named the deadliest country in the world for trade unionists. At least 62 labour activists were killed between 2008 and 2016. In Honduras in 2016, 20 unionists were killed or threatened. In El Salvador, poor working conditions in special economic zones are preserved by threats against union leaders.

Under pressure about the closed-door meetings in Miami, the Inter-American Development Bank promised to seek greater input from civil society but has not discussed instituting a labour standard. The militarisation and wave of megaprojects involved in the next stage of the Alliance for Prosperity will put the lives and rights of workers at risk. It is time for the IDB to join its peers in safeguarding labour.

Leo Baunach is the research officer for the Washington office of the International Trade Union Confederation.