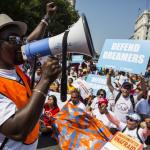 This morning Attorney General Jeff Sessions announced that the Trump administration will “wind down,” and in six months, end Deferred Action for Childhood Arrivals (DACA), a Department of Homeland Security initiative put in place in 2012 that temporarily deferred the deportation of approximately 800,000 young immigrants who were brought to the United States as children. DACA has been an unqualified success and has benefited not only the DACA recipients themselves, but also the country and the economy.

The young immigrants who met the requirements and passed the necessary background checks for DACA were promised by the federal government that they would not be removed from the United States for two years at a time, as long as they kept applying to renew, kept a clean criminal record, and were either enrolled in school or graduated, or serving in the military or honorably discharged. Because of these requirements, we know that nearly all of the recipients are deeply integrated into their local American communities and labor markets.

Along with protection from removal, DACA recipients are entitled to receive an employment authorization document (EAD), allowing them to be employed in the United States legally, along with certain other benefits. More than 100 legal experts and 20 state attorneys general have recently argued that DACA is a lawful use of the executive branch’s prosecutorial discretion, and as I have written before, the granting of an EAD to deferred action recipients is clearly authorized by statute. Together this means that eliminating DACA is entirely a political decision and not a legal one. The impact of this political decision is significant: 800,000 young immigrants—many of whom have never known another country except when they were small children—will become instantly deportable and lose the ability to work legally and contribute to the United States, and will be effectively left without labor rights and employment law protections in the workplace.

To call this decision tragic is an understatement. Not only is it inhumane—after President Trump promised to treat DACA recipients with “heart”—but the evidence is clear that DACA has positively benefited the U.S. labor market. The vast majority of DACA recipients are employed, 87 percent, and on average DACA recipients saw their wages increase by 42 percent after receiving an EAD. Those gains—and the higher tax revenue to the federal and state and local governments that have accompanied it and benefited public coffers—are now in jeopardy.

President Trump has also repeatedly voiced his desire to help improve working conditions for American workers, but by ending DACA he is harming the U.S. citizens and lawful permanent residents who are employed alongside DACA recipients. Once DACA recipients lose their work authorization, they will effectively be unable to complain when they are paid below the minimum wage, aren’t paid for overtime hours, or when their employer subjects them to unsafe conditions at the workplace. All immigrant workers who are unauthorized are often too afraid to speak out when employers take advantage of them, because they know their bosses can threaten them with deportation and use their immigration status to retaliate against them. The impact of this is not theoretical: research has shown that unauthorized immigrants suffer much higher rates of wage theft than U.S. citizens. The reasonable fear unauthorized workers feel keeps them docile and quiet, which in turn diminishes the bargaining power of Americans who work alongside unauthorized workers. Ending DACA and forcing these young workers out of the formal, regulated labor market, thus making them easily exploitable, will not help American workers, it will do the opposite.

Ending DACA will destroy the educational and employment prospects of 800,000 young immigrants who did nothing wrong, while at the same time hurting the wages and labor standards of American workers. If President Trump were serious about improving labor standards for working people, he would reconsider and reverse his decision.

Daniel Costa has been director of immigration law and policy research since 2013, having joined EPI in 2010 as an immigration policy analyst. An attorney, his current areas of research include a wide range of labor migration issues, including the management of temporary foreign worker programs, both high- and less-skilled migration, immigrant workers’ rights, and forced migration, including refugee and asylum issues and the global migration crisis.