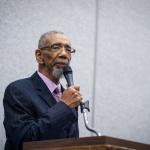 Despite his name being on the list of cosponsors, Representative Bobby Rush is not supporting the Israel Anti-Boycott Act, his office has confirmed.

The bill, backed by the powerful Israel lobby group AIPAC, has been condemned by the American Civil Liberties Union for violating constitutional free speech rights.

It could impose large fines and long prison sentences on those who boycott Israel in response to a call from an international organization.

The appearance of Rush’s name on the list of cosponsors caused consternation among activists. The Chicago congressman was a member of the Student Nonviolent Coordinating Committee and the Black Panther Party during the civil rights movement.

He has often been supportive of Palestinian rights, including signing a June letter along with almost three dozen other US lawmakers backing Issa Amro, a Palestinian human rights defender in Hebron who is facing a political trial by Israel’s military.

“Congressman Rush does not support the Israel Anti-Boycott Act,” a staffer at the lawmaker’s Washington office told The Electronic Intifada on Tuesday. “He supports the First Amendment.”

The staffer’s statement was confirmed in an email on Friday by Rush’s chief of staff.

According to his staff, Rush’s name has remained on the list of cosponsors because Congress is out of session and once it returns next week his office will ask to have it removed.

The Israel Anti-Boycott Act still has 252 other sponsors in the House and 48 in the Senate, but it has not enjoyed the easy, near-unanimous support that measures backed by the Israel lobby typically garner.

High-profile opponents of the legislation include senators Elizabeth Warren of Massachusetts and Kirsten Gillibrand of New York.

And in a strange moment at a townhall meeting last week, Missouri Senator Claire McCaskill claimed, “I don’t know what anti-BDS is,” and quickly skipped over a question about the bill – which targets the boycott, divestment and sanctions movement.

McCaskill is one of 13 Senate Democrats backing the bill, but is among several lawmakers who told The Intercept they are reviewing it in light of the concerns raised by the American Civil Liberties Union.

In face of the sustained grassroots pressure on lawmakers to oppose the bill, its chief Senate sponsor, Ben Cardin of Maryland, has expressed willingness to amend it in order to remove criminal penalties.

But in August, 100 civil and human rights organizations endorsed a statement urging lawmakers to reject the bill outright.

“Despite Senator Cardin’s efforts to insist the Israel Anti-Boycott Act doesn’t target political conduct, the leading lobby group for US support of Israel, American Israel Public Affairs Committee (AIPAC), itself frames it as a measure to ‘Combat the BDS movement,’” the groups say.

The groups say that amending the legislation would not solve the underlying unconstitutionality of the bill.

“We call on members of Congress who currently support the act to withdraw their sponsorship. And we call on all members of Congress to publicly oppose the Israel Anti-Boycott Act and to affirm the First Amendment right to support political boycotts – including those aimed at achieving justice and equality for Palestinians.”