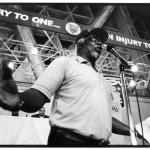 Leo Robinson was a leader of the longshore union in San Francisco. He died this week. For many of us, he was an example of what being an internationalist and a working-class activist was all about.