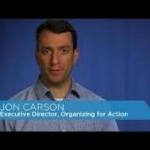 President Obama's second inaugural address struck a populist
tone, but the real news for progressives came last Friday
when it was announced that Obama's campaign organization
would continue under a new name, Organizing for Action.
Headed by Obama 2012 campaign manager Jim Messina, the new
organization will initially focus on three key progressive
issues: gun control, immigration reform, and climate change.
The decision to use the Obama campaign base to mobilize
around issues reverses the mistake made after the 2008
victory, when the huge Obama for America grassroots base was
cut adrift from mobilizing behind the President's first term
agenda.
After Obama's 2008 victory I wrote an article, "After the
Victory, Engaging Obama Volunteers." I saw the massive
grassroots campaign that brought Obama the presidency as
constituting the mobilizing base for his presidency. But in a
decision Obama now admits was a mistake, the operation was
cut off after the election.
My enthusiasm for Organizing for Action (under the
chairmanship of Messina but whose daily operations will be
run by Executive Director Jon Carson) is based on two
factors.
First, Obama has been much more effective selling his
proposals on the campaign trail than he has as President.
Organizing for Action boosts the President's campaign
mindset, and its clear from Messina and Carson's involvement
that Organizing for Action will be far more ambitious than
the limited Obama for America that emerged in 2009.
Second, the Obama campaign has activist lists whose numbers
dramatically exceed that of Move On, the AFL-CIO, and other
external progressive mobilizing groups. In order to win on
big issues like comprehensive immigration reform, it will
take such an all hands on deck mobilization.
Perfect Timing
Obama's support for Organizing for Action shows that he is
serious about taking the momentum from November and
immediately applying it now. And with the debt ceiling issue
now pushed back until June and Republicans in disarray, the
timing is perfect for passing gun control and immigration
reform.
The question on gun control is whether Organizing for Action
will go into House Republican districts and publicly target
representatives opposing or not adequately supporting key
portions of the bill. As I urged when the President was
trying to get his stimulus package through in early 2009, the
best way to win these legislative fights is through the
strategy pioneered by Neighbor to Neighbor in the
Congressional fights over military aid to El Salvador in the
1980's.
This means high profile targeting of representatives who can
be made to feel so uncomfortable about their pro-gun
position that they will flip. Enough House Republicans' can
be won over to pass strong gun controls, but this will not
happen absent strong public pressure in their home
districts.
There has been a lot of optimism about immigration reform
since Florida Republican Senator Marco Rubio expressed
support for a plan not that far from the President's likely
bill. Yet enacting a strong immigration bill will also
require resources beyond the coalitions of groups that have
not been able to get a bill through in the past.
Organizing for Action can dramatically increase the
grassroots pressure on wavering legislators by bringing new
resources and a broader base into the struggle. And for all
of Rubio's talk, there is a past pattern of Republicans who
sound open to Obama measures being yanked back into
opposition by the pressures of the right-wing media machine.
Climate Change?
While Messina announced that climate change would be among
Organizing for Action's early priorities, its not clear what
this means. Obama highlighted climate change in his
inaugural address, but left unstated what specific
legislation he will propose.
Obama stresses the importance of U.S. energy independence,
but that's consistent with his failure to reject fracking.
It's also consistent with supporting the Keystone XL
pipeline, which makes a mockery of talk about combating
climate change.
With the two key environmental positions both open (EPA and
Secretary of Interior), it's likely that green groups will
be spending the next weeks working to get preferred
candidates appointed. Both positions have vast
administrative decision-making discretion, and Obama's
choice of appointees will speak volumes.
Obama increasingly sounds like someone who feels he missed
opportunities in his first term and does not want to repeat
past mistakes. We will know by the spring if his efforts on
gun control and immigration reform have moved beyond past
attempts, and this will also tell us whether Organizing for
Action has made a difference.
[Randy Shaw is the author of The Activist's Handbook and
Beyond the Fields: Cesar Chavez, the UFW and the Struggle
for Justice in the 21st Century.]
Source URL: https://portside.org/2013-01-22/obamas-organizing-action-boost-progressives