Viet Nam! - More on the Burns and Novick Film 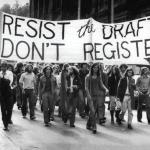 After everything, after all 18 hours of Ken Burns’ and Lynn Novicks’ epic 10-part documentary of the Vietnam War, what was their conclusion?

They framed it this way: the war was a terrible thing; leaders on each side of the war lied to and deceived their people; both sides did very bad things to the other side and to innocent people in the middle; and people who had fought each other in brutal battles and survived could still ultimately find ways to shake hands and even embrace years afterwards.

Talk about not seeing the forest for the trees! Although there is some truth to these points, their 10-part series—and I watched every one—ended up being an exercise in obfuscation and denial. And what was so insidious about it is that they actually reported accurately in the very first episode the truth which should have led to the right conclusion: that the United States should never have supported the French in their efforts to maintain brutal colonial rule over Vietnam after World War II, and that it should never have moved in to replace the French as a brutal occupying power after the French were forced to leave in 1954.

Why did the US do this? It isn’t complicated. Two quotes from 1954 make it plain:

“”One of the world’s richest areas is open to the winner in Indochina. That’s behind the growing U.S. concern. . . tin, rubber, rice, key strategic raw materials are what the war is really about. The U.S. sees it as a place to hold—at any cost.”      -US News & World Report, April 4, 1954

Both quotes are taken from the excellent book published in 1966, “Vietnam! Vietnam!,” by Felix Greene.

“The Vietnam War” series was mesmerizing for me. I learned many things I didn’t know, and I re-remembered many things I had forgotten. The war was the issue which changed my life. From 1968 to 1973 it was the issue that drove me to do things I’ve never done since as part of what was called the Catholic Left, like breaking and entering into Selective Service draft boards, an FBI office, and a war corporation office and production site. It led to my spending 11 months in county jails and federal prisons and being a defendant in two major political trials, in Rochester, NY in 1970 and in Harrisburg, Pa. in 1972.

The Burns and Novick series made no mention of this Catholic priest-initiated movement; it gave short shrift to the massive and impactful draft resistance movement out of which it came [the military draft was abolished]; and with the exception of the emergence of Vietnam Veterans Against the War in 1971, provided little substantive coverage of the organized anti-war movement which played an essential role in bringing the war to an end.

The war took place at a time when fear of what was called “communism” was very strong, when people like J. Edgar Hoover and Richard Nixon were seen as defenders of the “free world” against a ruthless enemy out to take over the world. Never mind that in the vast majority of cases where U.S.-friendly regimes were threatened by so-called communists, overwhelmingly in Africa, Asia and Latin America,  the fact is that it was really popular movements with broad support, including communists, liberals, students, religious people, labor and more, which were fighting for independence and self-determination.

The United States treating these movements in a hostile way unquestionably led to the movements being further radicalized, more hostile to the US, more willing to use—experiencing the need to use– increasing violence to gain their freedom.

In that first episode it was reported that when the Vietnamese popular movement proclaimed their independence at a massive rally in Hanoi in September, 1945, they put forward a Vietnamese “Declaration of Independence” whose first three sentences came straight from the US version: “All men are created equal. They are endowed by their Creator with certain inalienable rights, among these are Life, Liberty and the pursuit of Happiness.” It went on to say, “This immortal statement was made in the Declaration of Independence of the United States of America in 1776. In a broader sense it means, all the people on earth are equal from birth, all the peoples have a right to live, to be happy and free.” The remainder of it delineated all of the specific violent abuses and depradations visited upon them by the French “for more than 80 years.”

Tragically, despite this decidedly non-communist statement, and as the series shows in graphic detail, neither the French nor the US governments were willing to adjust their view of the Vietnamese independence movement for the next 30 years as anything other than an implacable enemy.

The defeat of the US government and the unification of Vietnam in 1975 was an historic victory for people everywhere. The emergence of a mass anti-war movement to end it, in combination with the civil rights and Black Freedom movement, changed the USA in ways that continue to echo today.

To keep changing our country in the right direction, however, we should learn the right lessons from that terrible war. Unfortunately, Burns and Novick have thrown up roadblocks to that happening which we will have to overcome.

Ted Glick has been a progressive activist and organizer since 1968. Past writings and other information can be found at http://tedglick.com, and he can be followed on Twitter at http://twitter.com/jtglick.