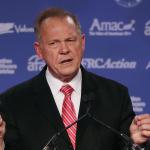 Roy Moore, Republican candidate for Senate and alleged child molester, enjoys much of his political longevity to his celebrity status within the Christian right. The gay bashing, the Ten Commandments fetish, barring Muslims from serving in Congress—Moore’s most extreme positions are precisely what makes him a beloved figure to so many white evangelicals. This hasn’t always translated to popularity within his home state of Alabama—winning the GOP primary is the closest he’s gotten to higher office—but it has established his reputation as an authentic Christian. One poll conducted before The Washington Post broke the accusations against Moore had him up 11 points over Democrat Doug Jones, who, by contrast, has campaigned on the fact that he prosecuted the Ku Klux Klan members responsible for bombing the 16th Street Baptist Church.

Moore and Jones represent the two faces of the South. Moore’s Christianity is as reactionary as his Alabama; Jones, with his civil rights background and his mainline Methodism, is the opposite. This distinction is even sharper now that four women have gone on record to accuse Moore of outright sexual misconduct and/or inappropriate “dating” when he was an adult in his thirties and they were teenagers. These revelations raise questions that had seemingly been answered, when Moore was on track to easily win the race. Is Alabama the state of Roy Moore, or is it the state of Doug Jones? Given the state’s large number of white evangelicals, they will likely dictate its direction for the foreseeable future. So the answer depends on a second question: Will they desert Roy Moore?

Some pundits seem to think they will:

It’s true that evangelicals have, at times, seemed lukewarm on Moore, but the Christian right’s admiration for the former Alabama Supreme Court chief justice has been pretty consistent. He recently appeared at the same Values Voter Summit that hosted Donald Trump, Steve Bannon, and Sebastian Gorka to great applause. And even the national GOP hasn’t been as full-throated in their condemnation of Moore as one would expect: Republicans have mostly restricted themselves to the milquetoast acknowledgement that he should withdraw from the race if the allegations are true.

For its part, the Alabama GOP, which is particularly far-right and particularly fanatical, has been emphatic that he should stay. Worse, many aren’t even denying the allegations. 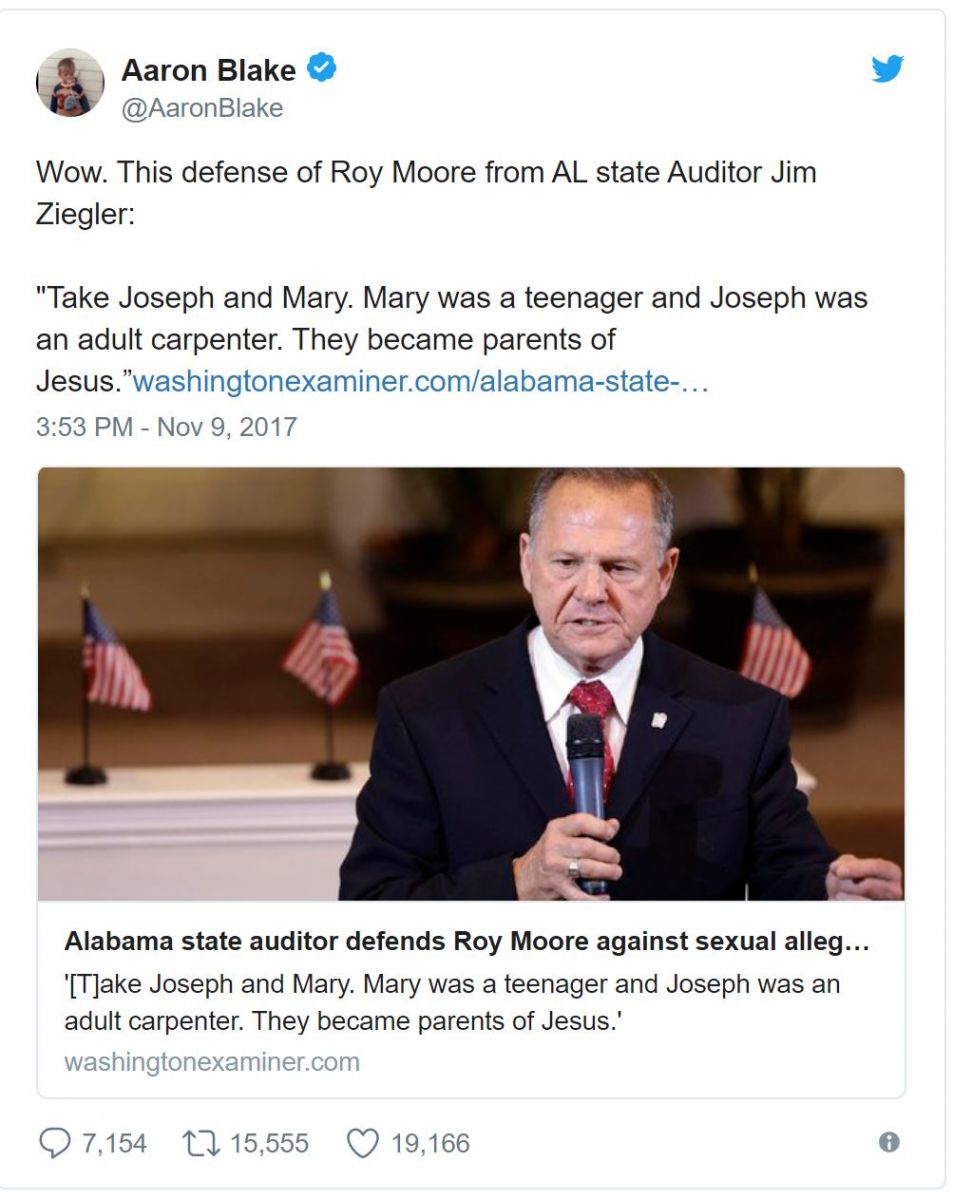 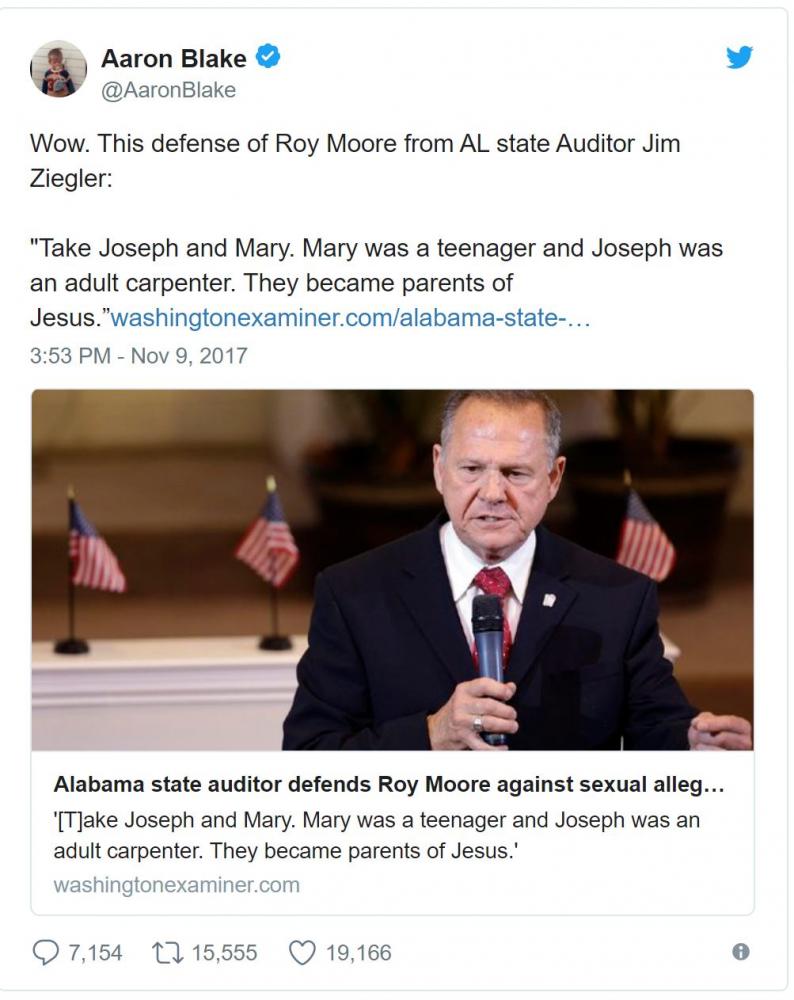 “There is nothing to see here. The allegations are that a man in his early 30s dated teenage girls. Even The Washington Post report says that he never had sexual intercourse with any of the girls and never attempted sexual intercourse,” Ziegler later told the Washington Examiner. No big deal, then! He only allegedly had a 14-year-old touch his genitals. Another Alabama Republican suggested that Moore’s accusers should themselves be prosecuted. And here is Alabama Marion County GOP chair David Hall: 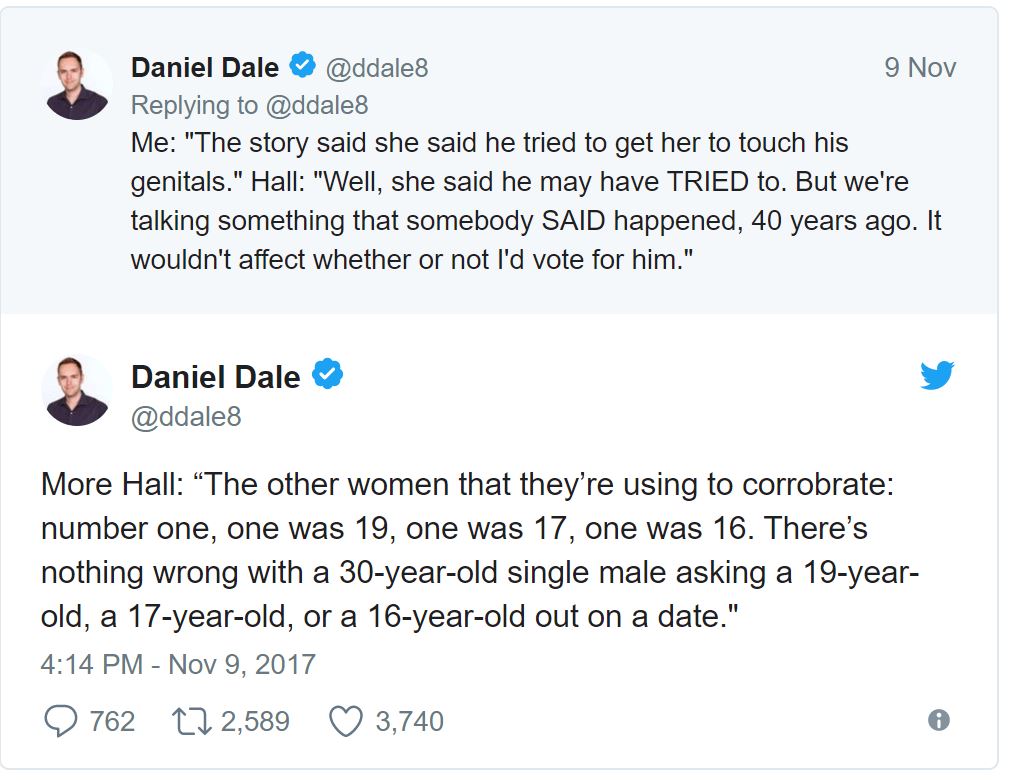 “I really don’t blame Roy Moore’s voters for sticking with him and I know they are going to come under withering attacks for standing by their man. They don’t deserve it. Clearly a lot of people would prefer to avoid dealing with how we got to this point of moral decay among conservatives who used to really believe character counted,” Erick Erickson wrote, before pivoting to a discussion of the Sutherland Springs shooter’s “militant” atheism.

Moore, for his part, is framing the controversy in terms familiar to any evangelical: as spiritual warfare.

This isn’t accidental, and it reveals quite a bit about why many white Alabamian evangelicals will stick with him. Never underestimate the depth of the evangelical martyrdom complex: In their view, Moore has taken public stands for the word of God, and now the secular world is punishing him for his righteousness. This is the fate promised to all faithful Christians. Thus, Moore’s brother compared Moore, an alleged pedophile, to Jesus Christ. In an email to Religion News Service, Jerry Falwell Jr. was not much more circumspect:

It comes down to a question who is more credible in the eyes of the voters — the candidate or the accuser,” said Jerry Falwell Jr., the president of evangelical Liberty University who has endorsed Trump and Moore, both Republicans.

“The same thing happened to President Trump a few weeks before his election last year except it was several women making allegations,” Falwell told RNS in an email. “He denied that any of them were true and the American people believed him and elected him the 45th president of the United States.”

There is not a shred of Christian feeling here, certainly not for the women who claimed they suffered from Trump and Moore’s predations. What animates this movement is a sense of persecution; after all, you can’t be part of a faithful remnant unless you are surrounded by enemies. This is such a bedrock belief for some evangelicals that little can change it; the claims of mere women do not suffice.

A general disdain for women is another reason evangelicals will continue to defend Moore. As any woman who grew up evangelical can tell you, the subculture is not overly concerned with the bodily autonomy of its female members, who are often treated as mere vessels for procreation. Look even further into the wilder weeds of this world, and you’ll find that antiquated ideas about courtship—essentially arranged, chaperoned dating—still hold and are still used to justify relationships between young girls and older men. Former ex-fundamentalist Kathryn Brightbill explains: 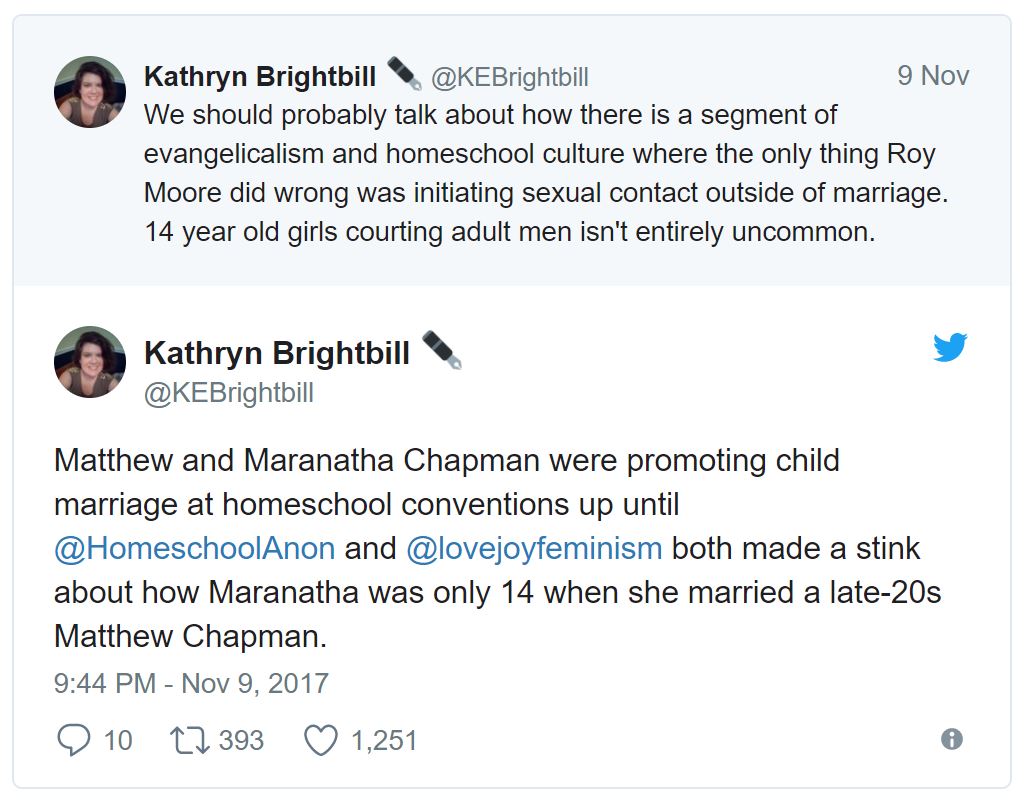 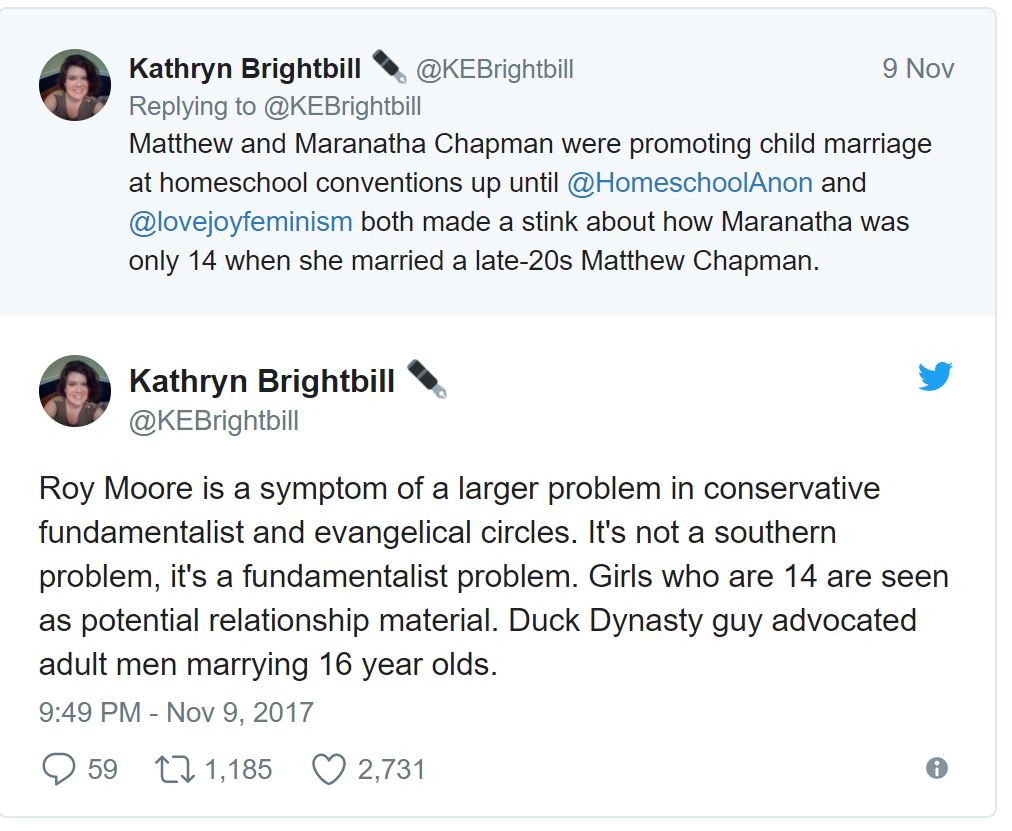 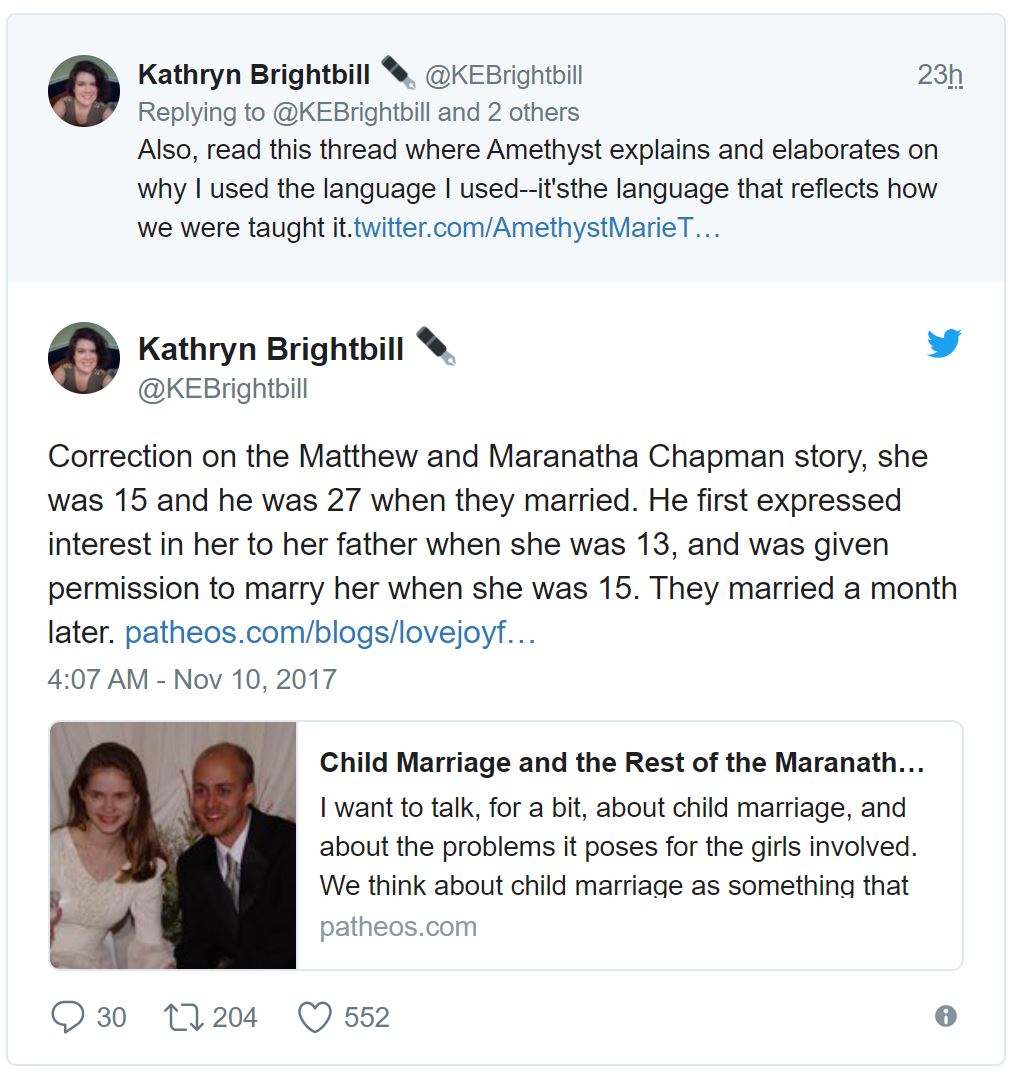 The Chapmans later married their 16-year-old daughter to a 26-year-old man. They were regular guests at Christian homeschooling conventions, and while this is an admittedly fringe faction even within evangelicalism, Christian homeschoolers still represent powerful lobbying blocs at the state level.

This is the upsetting truth: Religious traditions that embrace retrograde beliefs—that female sexuality somehow endangers men, that women should submit to men in the home and in the public sphere—aren’t equipped to deal with accusations of abuse. Whether it happens on the mission field or in the church sanctuary or in a lonely moment with a Christian politician, conservative Christians have often greeted sexual abuse as a cause for outrage when victims speak up.

Silence is a kind of death; it is a wage of sin. And repentance, as everyone knows, only works if you first admit your error. It is much easier to blame the persecutors, to live inside the world you know.

Sarah Jones is a staff writer for The New Republic. @onesarahjones