Veterans and the Minimum Wage 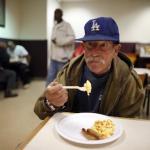 Nearly 2 million US veterans would benefit from raising the federal minimum wage to $15 per hour.

Approximately 1.8 million of the 9 million veterans in payroll jobs across the US would get a raise if Congress raised the federal minimum wage to $15 per hour by 2024, the liberal-leaning Economic Policy Institute determined in an analysis on the Raise the Wage Act of 2017 in honor of Veterans Day.

Nearly two-thirds of the veterans who would get the raise are age 40 or older, over 60% have some college experience, and nearly 70% work full time, the EPI found.

"This means that despite their service to the country, the intensive training that they have received, and the access to additional education provided to veterans through the GI Bill, 1 out of every 5 veterans is still being paid so little that they stand to benefit from raising the minimum wage," the Economic Policy Institute's David Cooper and Dan Essrow wrote.

The debate over raising the federal minimum wage has heated up over the past few years. Those against raising it argue that a higher minimum wage could lead businesses to raise their prices or to cut jobs and benefits in an attempt to offset the cost.

Those in favor of raising it, on the other hand, argue that raising the minimum wage above the current $7.25 per hour federal standard would improve living standards, and would enable consumers to spend more. That increased spending would then give a nice, healthy boost to an economy that still shows some slack several years after the Great Recession.

The current federal minimum wage is at $7.25 per hour. Parts of the country have raised their minimum wages above that, including a number of states and major cities like Seattle, Washington and Los Angeles, California.

A study from The Economist  in 2015 found that "one would expect America... to pay a minimum wage around $12 an hour" based on how rich the country is and the pattern among other developed economies in the  Organization for Economic Cooperation and Development (OECD) . 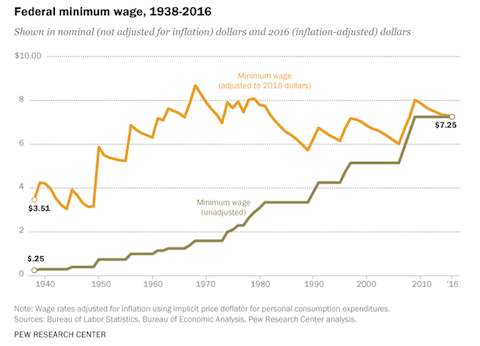