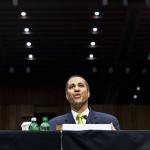 For years, those broadband providers have used lawsuits and agency filings to fight FCC oversight and overturn its authority to prevent net neutrality abuses. But never in those companies’ most feverish dreams did they expect an FCC chair would propose to demolish all net neutrality protections and allow ISPs to extract tolls from every business in the country.

Even industry analysts who expected the reclassification of broadband providers from Title II common carriers to Title I information services were stunned. Following Pai’s announcement, independent cable analyst Craig Moffett sent out an email to investors entitled "Shock and Awe and Net Neutrality," writing, “We've known since the election that the FCC would reverse Title II. But we never expected this. Yesterday’s FCC Draft Order on Net Neutrality went much further than we ever could've imagined in not only reversing Title II, but in dismantling virtually all of the important tenets of net neutrality itself.”

If Congress allows Pai’s plan to pass, all that will be left of FCC oversight of broadband providers is a weak disclosure requirement: If Verizon, for example, wants to block content, charge sites to be viewable on its network, or create paid fast lanes, the company will simply have to tell its subscribers in their contract’s fine print. (Broadband providers won’t have to disclose, and the FCC won’t have control over, the sneakier ways they’ve found to mess with the internet.)

And violations will come if Pai’s plan passes.

AT&T's Ed Whitacre summarized broadband providers’ true motivations best back in 2005: “Why should they be allowed to use my pipes?," he said. "The internet can't be free in that sense, because we and the cable companies have made an investment and for a Google or Yahoo or Vonage or anybody to expect to use these pipes free is nuts.”

Verizon echoed that sentiment in 2013 when it sued to challenge the 2010 open internet rules. It told a federal court that as an “information service” it had the right to charge online services like Yelp access fees simply to work on its network and should be able block those sites from Verizon subscribers if Yelp didn’t pay. (Verizon won that case, leading to the 2015 order and the reclassification of broadband providers as “common carriers”.)

The 2015 order, replacing the one Verizon had overturned, recognized this as a threat and prohibited ISPs from charging sites and services simply to reach their users. Pai, a former Verizon lawyer, thinks this would be innovative. Now his plan would usher in a radical upending of how the internet has worked in the US since its inception.

Every website could have to pay more to simply be online; prices for online services would likely rise as companies start to pay broadband providers to be in fast lanes, while broadband providers would find even sneakier ways to enact tolls on the internet, free of any agency able to set rules to stop them.

Startups and their potential investors would no longer have certainty that they could compete against incumbents, as they would need lots of money simply to pay each broadband provider for access or to escape the slow lane.

Today, small and medium-size businesses rely on a myriad online business services for internal communications, sales, and accounting, to name just a few. Slack, Dropbox, Gusto, Quickbooks, and thousands more would have to pay access charges and fast-lane fees, costs they would likely have to pass to their customers.

Non-mainstream media news sources across the political spectrum would no longer be able to afford to compete in the marketplace of ideas. Even churches that now reach their members online with streaming sermons, video libraries, and online video chats, would no longer be protected from blocking or access fees.

Americans understand this and are rightly freaking out.

Ryan Singel (@rsingel) is media and strategy fellow at the Center for Internet and Society at Stanford Law School and the CEO/cofounder of Contextly.