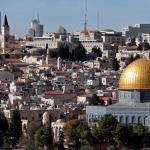 President Donald Trump will announce Wednesday that the United States recognizes Jerusalem as the capital of Israel and will eventually relocate its embassy there — a declaration that could spur violent protests in the Middle East and undermine the White House’s effort to strike a peace deal between Israel and the Palestinians.

Trump is making the announcement despite criticism from numerous U.S. allies, including France, Jordan and Saudi Arabia, which have urged him to avoid the extremely sensitive topic.

The president is still open to the possibility of a two-state solution, and he understands that the final borders of Israel and a future Palestinian state remain subject to negotiations, senior administration officials told reporters Tuesday.

Trump will also not declare that Jerusalem must be the “undivided” capital of Israel, an official told POLITICO.

Such caveats appear to leave room for Palestinians to at least claim East Jerusalem as their territory in a future state. Regardless, the administration officials insisted, Trump is not concerned that recognizing Jerusalem as Israel’s capital will derail the peace process, because he sees it as an affirmation of reality.

“While President Trump recognizes that the status of Jerusalem is a highly sensitive issue, he does not think it will be resolved by ignoring the simple truth that Jerusalem is home to Israel’s legislature, its supreme court and the prime minister, and as such is the capital of Israel,” one of the officials said, adding: “Delaying the recognition of Jerusalem as the capital of Israel has done nothing to achieve peace for more than two decades.”

Trump will direct the State Department to devise plans to move the U.S. Embassy from Israel to Jerusalem, but that process, the officials said, could take several years. Although in theory the president could simply switch the sign at the existing U.S. consulate in Jerusalem to say “embassy,” the administration says it wants to wait until an appropriate site is selected, proper security is in place and a host of other personnel issues are addressed.

Trump will continue to sign a national security waiver that allows the U.S. to keep its embassy in Tel Aviv for now — a process that comes up every six months under a 1995 law passed by Congress that requires moving the embassy to Jerusalem. Trump needs to sign the waiver so that State Department funding cuts aren’t triggered by the law, the senior officials said.

U.S. and foreign officials predicted that Trump’s decision would spark a possibly violent backlash in the Muslim world and badly damage America’s ability to be seen as an honest broker in a peace process — an initiative being led by Trump’s son-in-law Jared Kushner.

Already, the State Department has urged embassies worldwide to upgrade security and has restricted U.S. diplomats’ movements in Israel and the Palestinian territories, where demonstrations are expected starting Wednesday.

“U.S. citizens should avoid crowds and areas with increased police and/or military presence,” the department’s consular bureau said in a travel notice.

Both Israelis and Palestinians claim Jerusalem as their capital. But the U.S. and most of the rest of the world have long declined to take a position on the fate of the holy city, saying it’s a topic to resolve during negotiations.

Peace negotiators have long envisioned that Jerusalem would be divided between the two sides. And U.S. presidents, despite their campaign rhetoric, have for years been signing waivers delaying the move of the embassy.

The senior administration officials stressed that Trump remains committed to the Middle East peace process. Kushner, who also serves as a top White House adviser, has been working on a peace plan for several months.

The process has been largely shrouded in secret, involving only a handful of Trump aides. But a Trump recognition of Jerusalem as the Israeli capital could throw a wrench into the plan, U.S. officials and analysts say, by making the Palestinians unwilling to trust the Americans.

Abbas warned Trump of the “grave consequences” of moving the embassy, stating that such a decision would result in “detrimental consequences on the peace process and the prospects for the internationally endorsed two-state solution.”

In light of Trump’s planned announcement, the Palestinian delegation in Washington announced that it was canceling a Christmas celebration planned for Wednesday.

“Out of care for our leaders and children, it might be unsuitable for them to speak and sing shortly after the possibility of an announcement that runs counter to the message of peace,” the delegation said in a statement.

The Jordanian monarch warned Trump that “the decision will have serious implications that will undermine efforts to resume the peace process and will provoke Muslims and Christians alike,” according to a statement from the Jordanian government.

Saudi Arabia’s Ministry of Foreign Affairs also expressed “deep concerns” about the possible move in a statement. European allies, including France, have also weighed in, urging Trump to avoid taking a position on Jerusalem.

The president relishes being unpredictable, and he is known to often change his mind at the last minute. But for days now, White House aides have been indicating that Trump is determined to break with tradition, noting that he promised during the 2016 presidential campaign that he would move the embassy.

Trump has already proven hard to persuade on a number of issues that have broad international support. He has said the U.S. is pulling out of the Paris climate agreement, for one, and has also abandoned the Trans-Pacific Partnership trade deal. More recently, he decided to pull the U.S. out of an international effort to come up with a new framework for dealing with refugees.

What to do about Jerusalem is an issue that has sparked fierce internal debate, with Trump’s advisers warning that the move could threaten prospects for a peace deal. But the senior administration officials briefing reporters on Tuesday said the ultimate decision was borne of a collaborative effort.

They added that various U.S. agencies were prepared for potential unrest as a result of the president’s decision.

Nolan McCaskill and Louis Nelson contributed to this report.