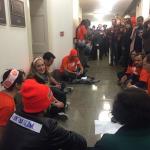 WASHINGTON -- As the competing Republican tax plans from the House of Representatives and the Senate head to a conference committee that will square the differences and create a final piece of legislation, graduate students are worried.

A group of 40 or so activists and graduate students, organized in part by Faculty Forward and the Service Employees International Union, took their concerns to Capitol Hill Tuesday in a protest outside the office of Representative Paul Ryan, the Speaker of the House. Upon coming to the office’s locked door, the protesters held their demonstration in the hallway.

It was a short-lived affair, with police quickly arresting nine people who declined to move after being given a warning. However, the protest captured the anxiety some graduate students expressed regarding the tax legislation, especially provisions stemming from the House bill.

“If it’s filled with any, or most of, the provisions aimed at higher ed, then I’ll have to drop out of my program,” said Tom DePaola, a doctoral candidate in education policy at the University of Southern California and one of the nine protesters arrested.

Graduate students who took to the Hill, many of them organizers at their respective graduate student unions, took issue with a broad range of measures presented in the tax overhaul, for reasons related to higher education and not. But, some said, if the tax legislation was going to pass, they hoped that some of the provisions in the House bill would be stripped in conference.

“I was really brought out here when I saw that they were going to tax our tuition waivers as income,” said Skyler Reidy, who is pursuing a Ph.D. in history at USC. “It’s going to force people out of grad school; it’s going to force the most vulnerable students out. But it’s part of a bigger attack on the middle class.”

Doctoral students often work for relatively small stipends, but the upside for some of them is that their tuition is waived by their university. The House tax plan, however, would count those tuition waivers as taxable income, meaning many students would be taxed for roughly twice the income they actually see in their bank account.

Graduate students at the University of Pennsylvania also spoke out against the tuition-waiver provision last week, when they joined in protests against the tax overhaul held across the country.

The fate of the tuition-waiver provision, like many of the differences between the Senate and House tax plans related to higher education (laid out here) is up in the air. Given that the conference committee members haven’t been announced yet, it’s too soon to tell what’s going to be in the final text, though a spokeswoman for the Senate Finance Committee said that Senate Republicans hoped to keep their language regarding higher education matters.

“There was a strong desire among Senate Finance Committee Republicans to preserve current education incentives in the tax code,” Katie Niederee, committee press secretary, said in an email. “The Senate bill reflects the will of the committee. As we move to conference, Chairman [Orrin] Hatch will work with his colleagues to reconcile the differences and preserve the Senate language.”

A spokeswoman for Ryan did not return a request for comment on how committed House leadership is to seeing the tuition-waiver provision make it into the final legislation, or whether there were any higher education-related provisions from the House bill that Republican leaders were making a priority to make law. A spokesman for Senate majority leader Mitch McConnell referred a request for comment to the Finance Committee.

Also weighing in on the fate of the two tax bills was Peter McPherson, president of the Association of Public and Land-grant Universities. In a letter sent Tuesday to Hatch and Senator Ron Wyden, the Finance Committee’s ranking Democrat, as well as their counterparts on the House Ways and Means Committee, Representatives Kevin Brady and Richard Neal, McPherson lobbied in favor of the Senate bill’s language for multiple provisions.

McPherson, a former Michigan State University president and Reagan administration official, lobbied to nix the House’s tuition-waiver provision. He also argued against House language on employer-provided tuition assistance, the Lifetime Learning Credit and student loan interest deductions. He disagreed with the Senate, however, when it came to taxing universities’ unrelated business income.

"APLU has been communicating with public university leaders and urging them to contact their congressional delegation to detail their concerns and advocate for the provisions that are critical for their students and universities," Jeff Lieberson, an APLU spokesman, said in an email. "We don’t know the facts of this particular situation on the Hill today, but we know that students are speaking out around the country to express their strong concerns over the major tax increase they could face under the legislation being considered. Students nationwide are rightfully concerned about how this bill would impact them. We think it is critical that students appropriately exercise their constitutional rights to engage in the democratic process. Their voices need to be heard."

Students at Penn called the state’s Republican senator, Pat Toomey, urging him to vote no on the Senate’s plan. Toomey, an advocate for the bill, ended up voting yes.

“Neither the House and Senate plan are finalized,” Toomey’s office said in a statement last week. “When looking at a tax-reform package, it is important to remember that it extends beyond singular changes and deductions. So while both the House and the Senate plans adjust tax treatment for certain entities and eliminate certain deductions, they both also lower rates, double the standard deduction and increase the child tax credit, resulting in a net tax cut for millions of working-class and middle-income Pennsylvanians.”

Graduate students gathered in Philadelphia last week and those in Washington Tuesday, however, pointed to a litany of provisions -- many in the House plan -- that they and higher education advocates find worrisome.

In addition to the tuition-waiver provision, for example, deductions for state and local property taxes would be capped at $10,000 in the House tax bill. While those do not deal with higher education outright, some are worried that limiting the deductions will translate to less tax revenue going toward community colleges and public universities, as taxpayers in states that are generous to public higher education start to seek to curb state spending.

“What we’re really seeing is a targeted effort by the GOP to not just attack education, but working-class students’ access to it,” said Laura Jaramillo, a doctoral candidate at Duke University’s program in literature, who protested at Ryan's office.

Students were split on how optimistic they should be as the tax legislation winds its way through Congress, but Reidy hopes that -- even though he opposes the legislation at large -- the final text would, at the very least, be friendlier to graduate students.

“The House version of the bill contains some of the most vicious provisions,” he said. “When you go in to negotiate, why on earth would you fight to make life harder for grad students?”