Film Review: 'All the Money in the World' 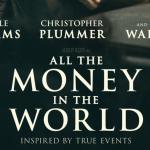 "If you know the enemy and know yourself, you need not fear the result of a hundred battles." The Art of War, Sun Tzu

Ridley Scott's new film 'All the Money in the World' is an important contribution to the development of a counter-hegemonic culture, in other words, a culture that challenges the dominant culture of the US oligarchy.

'All the Money in the World' is an articulate depiction of the inhumanity of the human beings at the top, the 1%, or more accurately the 0.1%, who control all the wealth and try to control the path of things to come. This is a compelling reason to see this film, to feel in your gut what surpasses any abstract thoughts of the evil of our oligarchs.

'All the Money' first caught my attention when Ridley Scott announced that he had cut all the scenes with Kevin Spacey and reshot them with Christopher Plummer. Plummer may have portrayed the billionaire J. Paul Getty more effectively given his advanced age and lower energy level than Spacey.

The other striking element in the film is the portrayal of Marx's famous critique of capitalist culture as the "fetishization of commodities." It means that people in a capitalist society begin to treat commodities as if value is inherent in the objects themselves, rather than in the amount of real labor expended to produce the object.

J. Paul Getty's character articulates his love of things that substitutes for any feelings for his grandson. While his grandson's mother begs for his help Getty gazes lovingly at a Renaissance portrait of a mother and child that he is bargaining for. This portrayal exposes the commodity fetish as the cultural product of the oligarchs, an excrescence that poisons the working class culture of solidarity.

The film goes to the heart of the commodity fetish as a contradiction of working class solidarity. Getty's grandson Paul becomes a human commodity when he's kidnapped by impoverished Calabrians. They house and feed him while waiting to sell him, but Getty refuses to buy. Then they sell him to a wealthy crime family who start carving pieces of the human-commodity Paul to advance the bargaining. The poor Calabrian saves Paul's life at the end in a touching demonstration of human solidarity. The story echos the era of American slavery where thousands of humans were held captive, forced to labor, bought and sold as commodities.

'All the Money in the World' opened in theaters on December 25th.

[Randolf Shannon is an activist in electoral politics, labor, civil rights, peace, and environmental causes in western PA. He is on the Board of Directors of Progressive Democrats of America (PDA) and was an elected delegate to the Democratic National Convention in 2016 pledged to Bernie Sanders. He is also a member of Democratic Socialists of America (DSA) and a delegate to DSA's recent national convention in Chicago. He is a founder of CCDS and a member of its National Coordinating Committee . He started as an anti-war and civil rights campus activist in the South in the mid 1960's withdrawing from Duke Univ. in 1968 to become an organizer for the Southern Student Organizing Committee (SSOC).]