With Government Shutdown, Republicans Reap What They Sow 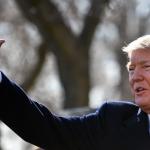 Today’s Republican party is built on principle. As a matter of principle, the GOP believes it is the only party that can shut down government as a negotiating tactic. The Democrats’ job is to keep that government open and to cave in to its demands.

These truths we hold to be self-evident, after watching several rounds of this sad kabuki theater through the Clinton and Obama years.

Now that the Democrats have triggered a government shutdown, Republicans are outraged. Because of their principles, you know.

The ideologue responsible for Trump’s budget, Mick Mulvaney, put it best to reporters at the White House on Friday. Mulvaney, now director of the Office of Management and Budget, was previously a South Carolina congressman. In that role, he was one of the chief proponents of the last government shutdown because he opposed Planned Parenthood and Obamacare.

Now he says the Democrats have no right to do what he did because, well, that would make them unprincipled.

“Keep in mind, go back and watch what they said about folks during the 2013 shutdown who wanted to talk about things like the Obamacare repeal at that time,” he said. “One of the criticisms they made of folks like me is that I was inserting non-financial issues into an appropriations process, which is exactly what’s happening now. So I recognize the fact that Washington does not understand the meaning of the word hypocrisy and irony. The truth of the matter is they’re doing the exact same thing they accused the Republicans of doing in 2013.”

Ah yes, the irony of it all. It takes a special type of hypocrite to accuse your opponents of hypocrisy for following in your footsteps.

As a matter of principle, it’s Republicans like Mulvaney who are the deficit hawks, caring deeply about the fiscal rectitude of the federal government. Right up to the point when one of them says the words “tax cuts”, which turn out to be far more important than balancing the budget or the national debt.

Thank goodness we have the Republicans in total control of Washington, after all those years of the Democrats failing to pass a real budget. Now we can watch the Republicans create an even more dysfunctional budget process with continuing resolutions that last just a few weeks at a time.

This is not the only principled issue that defines today’s GOP.

For Christian conservatives, Donald Trump may be a sinner but he’s really doing God’s work. That’s a whole new definition of family values right there.

This is the kind of irony that Republicans ought to understand. After all, the first real shutdowns of the current era – the shutdown that set the tone for all that followed – was the product of Newt Gingrich’s war against Bill Clinton. The 1995 and 1996 debacles were ideological clashes over the size of government by a flame-throwing House Speaker who wanted to cut the president down to size.

That was the first salvo in a war over family values that led to Clinton’s impeachment for an affair with an unpaid intern that began during that same shutdown. Of course Gingrich himself had been unfaithful with another woman for a couple of years before that shutdown. Callista Bisek became his third wife, and is now Donald Trump’s ambassador to the Vatican. So there’s no irony or hypocrisy there at all.

At least the 1990s shutdowns were about the budget. The next government shutdown in 2013 was simply about defunding Obamacare and destroying Barack Obama. For some Tea Party-infused Republicans, this was a principled stand. For every Republican senator other than Ted Cruz, it was madness.

Now Republicans are perfectly entitled to say Democrats are copying them. We can argue about whether their principles about Obamacare are more or less important than the Democratic efforts to stop the deportation of children brought to the country as undocumented immigrants.

We can surely all agree that shutdowns are an insane way to manage political disputes at any time, by any party. Democrats should take no pride in shutting down the government.

Like some political goldfish swimming in a bowl of amnesia, Republicans have forgotten they picked up seats in the mid-term elections following their own 2013 shutdown. In fact they picked up control of the Senate, and with it, blocked everything Obama wanted to do, including his nomination of a supreme court justice.

The GOP believes it has set a brilliant trap for Democrats with a cunning ploy of pretending to care about children’s health insurance. “Who could vote against children?” says the party that allowed the insurance to lapse in October.

And who could support the deportation of children? The one thing Republicans didn’t count on was their own president, whose racist rant about “shithole” countries blew up a hard-fought bipartisan deal on immigration.

This is a shithole of the Republicans’ own making. They control all sides of Washington and have now made history by presiding over their own shutdown, under a president who prided himself on knowing the art of the deal.

No deal, no sympathy: polls suggest most voters blame both Trump and the Republicans for the open sewer that stretches all the way down Pennsylvania Avenue.

During previous shutdowns, calm heads ultimately prevailed: people who cared about good government, or at least worried about the polls that pointed to widespread public disgust. But this is now Donald Trump’s Washington and there are no calm heads to be found.

As a matter of principle, Republicans cannot come together to agree a deal on immigration. As a matter of sanity, Donald Trump cannot stop his racist belching or surrender the fantasy about his Mexican wall. This shutdown shit-show could run and run.