Trump and Schumer Came Close to a Deal. 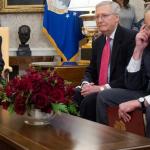 Washington (CNN)After his morning television shows had ended and as the deadline to fund the government loomed, President Donald Trump placed a call to the man in Washington he believed held all the cards: Sen. Chuck Schumer.

The flurry of conversations that ensued between the President and the Senate's top Democrat -- beyond just their Friday lunch in the President's private dining room -- reflect the lengths Schumer was willing to go in negotiating with a President eager for a deal. But they also demonstrate the chaos and unpredictability that Trump has injected into an already dysfunctional capital city.
Trump's midday negotiations with Schumer provided some glimmers of optimism, according to a source familiar with the conversation. But in the end the talks failed to yield a plan that could avoid a shutdown. Thirteen hours after Trump first phoned Schumer from his White House residence, government funding ran out.
The sole face-to-face meeting between Trump and a Democratic lawmaker on Friday was a last-ditch effort to keep the government open by a President whose party controls both chambers of Congress. But 90 (mostly friendly) minutes of hashing out options on immigration plans couldn't get Trump -- or his sole aide in the room, chief of staff John Kelly -- onto the same page with Democrats.
"This afternoon in my heart, I thought we may have a deal tonight. That was how far we'd come. That's how positive our discussion felt. We had a good meeting," Schumer said on the Senate floor after midnight. "But what has transpired since that meeting in the Oval Office is indicative of the entire tumultuous and chaotic process Republicans have engaged in in the negotiations thus far."
This account of how the day unfolded is based on CNN interviews with a half-dozen administration and congressional aides and others familiar with what transpired.

Trump first called Schumer at 10:45 a.m. ET for an upbeat conversation where both men declared their differences weren't insurmountable. Neither side wanted a shutdown, they agreed, determining that long-term agreement was possible. Schumer warned Trump that the top Republicans in Congress -- House Speaker Paul Ryan and Senate Majority Leader Mitch McConnell -- wouldn't go along with any plan without Trump's explicit support.
Trump agreed. They decided to continue talking over lunch.
The invitation came as a surprise to many of Trump's aides. As is often his practice, Trump told few people of his plans to ask Schumer to the White House for talks. When word emerged on Capitol Hill that the New York Democrat was speeding across town in the backseat of a black Ford Expedition, Republican lawmakers could barely hide their grimaces.
Asked if he was worried that Schumer -- and Schumer alone -- would have Trump's ear, the No. 2 Republican in the Senate cracked wise.
"The thought did cross my mind," Sen. John Cornyn of Texas said.
Inside the President's small dining room -- outfitted with a flat-screen television -- Trump and Kelly sat across from Schumer and his own top aide to discuss the outlines of an long-term agreement.
Among the items considered: military funding far above the White House's request and, enticingly for Trump, full funding for Trump's border security demands. The border offer went beyond what was included in the bipartisan plan conceived by Sens. Dick Durbin and Lindsay Graham which Trump rejected last week in vulgar terms.
The outlines of the potential agreement seemed promising. But it wouldn't come together in the half-day left before the shutdown. Schumer told Trump they'd need a stopgap plan to fund the government for a few days. Trump concurred, said he'd discuss the plan with Republicans, and promised to phone Schumer later with an update.

Excellent preliminary meeting in Oval with @SenSchumer - working on solutions for Security and our great Military together with @SenateMajLdr McConnell and @SpeakerRyan. Making progress - four week extension would be best!

Trump was buoyant in describing the meeting on Twitter: "Excellent preliminary meeting in Oval with @SenSchumer," he wrote. "Making progress - four week extension would be best!"
A White House official said late Friday there was never a deal reached between Trump and Schumer, and Trump did not agree to a five-day continuing resolution during their talks.
Schumer left the White House after 2 p.m. ET, walking out of the West Wing and into the same Ford Expedition. Standing outside the Capitol,
Schumer was intercepted by a phalanx of reporters and cameras. The usually talkative senator was curt.
"We had a long and detailed meeting, we discussed all of the major outstanding issues. We made some progress but we still have a good number of disagreements," Schumer said quickly. "The discussions will continue."

Inside the Capitol, Democratic lawmakers flowed to Schumer's office. Kelly, meanwhile, phoned Republicans to assure them Trump hadn't agreed to any outlandish deals.
A few hours later, the two men spoke again. On the phone with Schumer, Trump claimed to have heard that House Democrats and Republicans had agreed on a three-week funding plan. There was no indication on Capitol Hill that such an agreement had emerged.
Schumer, who hadn't heard of the mystery plan, told Trump he could only agree to a deal that lasted a few days -- the same plan they'd discussed over lunch. Trump's response: work it out with McConnell, the Republican majority leader.
Until then, Schumer and McConnell had avoided direct talks on Friday. When Schumer called in the afternoon to recount his conversations with Trump, McConnell told him to work out his differences with the President.
But instead of calling Trump, it was Kelly -- the retired four-star Marine who'd sat aside Trump during lunch -- who called Schumer. The outline discussed earlier in the day was too liberal, Kelly said, even with a discussion of Trump's full border request. It wasn't enough to keep the President negotiating.

View from the White House

In the next several hours, efforts to reach a deal fell apart. Watching from the White House, Trump -- who'd tweeted with optimism hours earlier -- expressed dismay.
"Not looking good for our great Military or Safety & Security on the very dangerous Southern Border," he wrote. "Dems want a Shutdown in order to help diminish the great success of the Tax Cuts, and what they are doing for our booming economy."

Not looking good for our great Military or Safety & Security on the very dangerous Southern Border. Dems want a Shutdown in order to help diminish the great success of the Tax Cuts, and what they are doing for our booming economy.

Earlier in the morning, the White House scrubbed plans for Trump to fly to Florida for a weekend at his Palm Beach resort. Awaiting Trump at his Mar-a-Lago estate were about 100 high-dollar donors, who paid in the six-figures for tickets to a campaign fundraiser on Saturday night, the one-year anniversary of his inauguration
Trump had been looking forward to the occasion, people who spoke with him on Friday said, who described him as upset at the prospect of canceling the entire Florida weekend.
"He's not leaving until this is finished," Trump's budget director Mick Mulvaney told reporters outside the White House on Friday.
By the time the shutdown went into effect at midnight, the White House had gone quiet. The exterior lights illuminating North Portico went dark at 11 p.m. ET, an hour before the shutdown, just as it became clear the Senate vote had fallen short.
The President had long been in the residence, likely watching the Capitol Hill spectacle unfold on television. His aides left the West Wing well before the midnight deadline.
Source URL: https://portside.org/2018-01-20/trump-and-schumer-came-close-deal