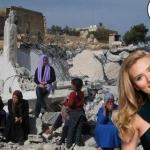 When the Palestinian American Women’s Association (PAWA) was approached by the Women’s March Los Angeles Foundation to participate in this Saturday’s anniversary event, the invitation to include a Palestinian women’s organization was a welcomed step toward building a more aware and intersectional movement. Its organizers label the march as “Pro Peace, Pro Inclusivity focused on marginalized voices and the power of voting.”

However, PAWA recently became aware of LA March’s decision to include Scarlett Johansson in their lineup of special guest speakers. Johansson has expressed her unapologetic support of illegal settlements in the West Bank, a human rights violation recognized by the international community whose calls only led to a reaffirmation of her position, sending a clear message that Palestinian voices and human rights for Palestinians do not matter. While her position may not be reflective of all organizers at the Women’s March Los Angeles Foundation, PAWA cannot in good conscience partner itself with an organization that fails to genuinely and thoughtfully recognize when their speaker selection contradicts their message.

Currently, 16 year old Ahed Tamimi is being held in custody for standing up to two Israeli combat soldiers who raided her family home in the middle of the night on illegally occupied land. Her story, one among hundreds of Palestinian children being abused and imprisoned by Israeli military, has been heard across the globe with calls to #FreeAhed, making the decision to invite Scarlett Johansson speak at an event highlighting “the struggles of marginalized communities and all attacks on human rights” all the more tone deaf.

We join Al-Awda: The Palestine Right to Return Coalition, Jewish Voice for Peace, Code Pink, BDS-LA, Jews for Palestinian Right of Return and other organizations who have signed the petition below in boycott of the January 20 march in Los Angeles.

Moreover, we pledge to work harder to ensure the voices and partners we ally with are committed to justice and human rights that include the rights of the Palestinian people.

We urge people to read and sign the petition below, which also includes accounts of mistreatment toward grassroots organizers working for Palestinian human rights.

We embrace and applaud the intersectional analysis that marks today’s social movements, and decry the absence of this perspective in outreach for the Women’s March Los Angeles.

In a shocking move, you announced that a “Special Guest” speaker at WMLA 2018 is Scarlett Johansson, who is unabashedly a supporter of Israeli violations of Palestinian human rights. She served as a spokesperson, and indeed, was the face of the advertising campaign of SodaStream, whose factory was in a settlement built illegally on land stolen from Palestinians in the occupied West Bank. As a result, she was forced to step down from her role as an ambassador for the humanitarian group Oxfam after working with the charity for eight years.

Johansson’s unapologetic support for Israel’s abuses of Palestinians confirms that she fully deserves the praise Israeli Prime Minister Benjamin Netanyahu heaped on her in his speech to the Israel lobby group AIPAC in Washington, several years ago. Netanyahu said Johansson should be “applauded” for opposing the Boycott, Divestment, and Sanctions (BDS) campaign for Palestinian rights. Regardless of her claims to not be “political,” Johansson is now seen by Palestinians and their supporters as a defender of apartheid Israel.

While there are a host of OTHER examples that can be cited, here we want to focus on the impact on those of us who actively support the indigenous rights of the Palestinian people, especially in light of the recent international attention on women and child political prisoners, including 16-year-old Ahed Tamimi, the young Palestinian Rosa Parks.

Once again, grassroot feminists who promote Palestinian human rights are concerned that a hostile environment is promoted by the organizers of WMLA -- whether inadvertently, or not -- by the choice of featured speakers, major donors, and major partners.

The organizers of the Women’s March LA are well aware of the issues the “Women 4 Palestine” contingent faced at last year’s “Women’s March LA.” We were verbally abused with racist remarks, and bullied, to the point that some of us are reticent to return out of concern for our personal safety. Our concerns were brushed off by your organizers, in fact one of you accused one of our members as being anti-semitic when she posted an announcement for our Women's Rally to Free Ahed and All Palestinian Child Prisoners.

We also object to tone set as a result of the key role played by The National Council of Jewish Women LA, especially as a major donor to both the national and local Women’s March. When Nancy Kaufman, CEO of the National Council of Jewish Women, said that “we didn’t want it to become an Israel-bashing fest...We got assurances that the march is not anti-Trump and not anti-Israel,” it was clear that they were determined to silence the voices of critics of Israel and supporters of Palestinian rights.

Renowned Black feminist poet, June Jordan’s poetry embodies the intersectionality of Black and Palestine liberation. “I was born a Black woman / and now / I am become a Palestinian / against the relentless laughter of evil / there is less and less living room / and where are my loved ones / It is time to make our way home.”

Last year’s Women’s March, DTLA looked like it was covered with a fresh coat of snow studded with pink caps. In no way did it reflect the wonderful diversity of Los Angeles County. Unfortunately, we never heard that was a concern for WMLA’s leaders, either before the march when several of us raised these issues, OR afterwards. What a shame and missed opportunity.

It’s well past time to be genuinely intersectional, inclusive, transparent, and welcoming of marginalized people, including the Palestinian community, an approach exemplified by the International Women's Strike, which mobilized thousands of women in March of 2017 for gender, economic and social justice, while also centering the "Decolonization of Palestine," anti-imperialism, and an end to gendered state violence. IWS organizers are once again mobilizing for March 2018 International Women's Day marches and strikes.

In that spirit we invite you to join us, when many of us will participate in the International Women's Day March & Rally 2018-Organized by AF3IRM, in Downtown Los Angeles on Saturday, March 3rd, 2018, noon to 3pm. This march is convened and led by transnational/women of color, but all people are welcome.

Cathy Castro, founder, Threads of Peace, a 501c(3) dedicated to promoting peace, one thread at a time; Creator, #BlanketofLoveforGaza, a traveling peace and Gaza awareness exhibit

Jim Lafferty, Executive Director, National Lawyers Guild, Los Angeles; Fellow, University of Southern California, Institute for the Humanities; Chair, Board of the Office of the Americas

Then, in a surprise move, she handed the mic to her daughter, Thandiwe, whose speech on Palestine was livestreamed on Facebook to hundreds of thousands viewers (watch here: tinyurl.com/yd3jydvn). She said, in part:

"Hi. My name is Thandiwe Abdullah. I’m 14 and as a black Muslim girl, it is very important to me that Black Lives Matter also values the lives of the Muslim women in Palestine; the Muslim women and fems in Palestine. The US justifies and advances the global war on terror via its alliance with Israel and is complicit in the genocide taking place against the Palestinian people."

And Lydia Ponce, of AIM So-Cal, on the Pershing Square stage during an opening prayer for "all children to be kept safe out of harms way," held up a Free Ahed Tamimi poster.

Meanwhile, PAWA's boycott of WMLA was covered in the L.A. Times, NBC Los Angeles, Mondoweiss, and other media.

PAWA's boycott was sparked by WMLA's choice of "Scarlett Johansson in their lineup of special guest speakers. Johansson has expressed her unapologetic support of illegal settlements in the West Bank," thus ignoring the Boycott, Divestment and Sanctions (BDS) movement for Palestinian human rights .

The boycott of WMLA also parallels a boycott by women of color of the Women's March in Philadelphia and elsewhere.

Linda Sarsour, Women's March National Board Member, has endorsed the petition, along with human rights organizations including, Jewish Voice for Peace LA, Al-Awda: The Palestine Right to Return Coalition, Jews for the Palestinian Right of Return, and the US Campaign for Palestinian Rights.

Moderator's Note: The turn-out of more than 500,000 people at the LA March was an inspiration as well as the significant increase in the diversity of the participants as well as speakers along with the increase in organized delegations and the shared focus on ACTION in ALL arenas. The failure to stand with the struggles of Palestinian and Palestinian American women sure as hell shows our political challenges continue. Our work is for our movement to come to the recognition of the Palestinian cause.  Within our broad anti-Trump coalition there are going to be people with whom we disagree.  The key is the breath of our shared movement and within that to raise the criticism of Israel and support for Palestine. We can do this!