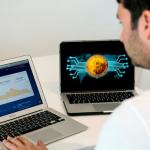 The 20th anniversary of Open Source Software is being celebrated on February 3rd at FOSDEM, taking place in Brussels, Belgium. A new website has been launched by the Open Source Initiative in connection with this milestone anniversary.

The worst candidate for the job.

Facebook sought to control the release of information, with a highly unusual demand: Officials must give Facebook at least three days before responding to any public records request.

How deep learning came to power Alexa, Amazon Web Services, and nearly every other division of the company.

By Angela Monaghan
February 2, 2018
The Guardian

Nouriel Roubini calls cryptocurrency the ‘mother of all bubbles’ as it falls below $8,000.

Private Censorship Is Not the Best Way to Fight Hate or Defend Democracy: Here Are Some Better Ideas

We are at a critical moment for free expression online and for the role of the Internet in the fabric of democratic societies. We need to get this right.