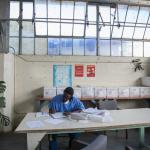 Imagine if prisons looked like the grounds of universities. Instead of languishing in cells, incarcerated people sat in classrooms and learned about climate science or poetry — just like college students. Or even with them.

This would be a boon to prisoners across the country, a vast majority of whom do not have a high school diploma. And it could help shrink our prison population. While racial disparities in arrests and convictions are alarming, education level is a far stronger predictor of future incarceration than race.

The idea is rooted in history. In the 1920s, Howard Belding Gill, a criminologist and a Harvard alumnus, developed a college-like community at the Norfolk State Prison Colony in Massachusetts, where he was the superintendent. Prisoners wore normal clothing, participated in cooperative self-government with staff, and took academic courses with instructors from Emerson, Boston University and Harvard. They ran a newspaper, radio show and jazz orchestra, and they had access to an extensive library.

Norfolk had such a good reputation, Malcolm X asked to be transferred there from Charlestown State Prison in Boston so, as he wrote in his petition, he could use “the educational facilities that aren’t in these other institutions.” At Norfolk, “there are many things that I would like to learn that would be of use to me when I regain my freedom.” After Malcolm X’s request was granted, he joined the famous Norfolk Debate Society, through which inmates connected to students at Harvard and other universities.

Researchers from the Bureau of Prisons emulated this model when they created a prison college project in the 1960s. It allowed incarcerated people throughout the country to serve their sentences at a single site, designed like a college campus, and take classes full-time. Although the project was never completed, San Quentin State Prison in California created a scaled-down version with support from the Ford Foundation, and it was one of the few prisons then that offered higher education classes.

Today, only a third of all prisons provide ways for incarcerated people to continue their educations beyond high school. But the San Quentin Prison University Project remains one of the country’s most vibrant educational programs for inmates, so much so President Barack Obama awarded it a National Humanities Medal in 2015 for the quality of its courses.