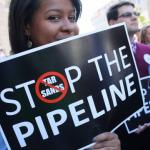 Citing serious adverse health concerns, National Nurses United announced today that it is joining  with environmentalists, unions and other organizations from across the country to oppose the Keystone XL Pipeline - the 1,700 mile of tar sands oil pipeline from Canada to refineries in Texas.  With 185,000 members, NNU is the largest organization and union of registered nurses.
The Keystone XL could have a significant impact on the health of communities in the tar sands production areas along its route and refinery fence line communities where the heavy sour crude will be processed. In addition, the emissions from tar sands will exacerbate climate change which affects public health much more broadly even than the widespread direct impacts of the tar sands industry.
"Nurses care for patients every day who struggle with health crises aggravated by environmental pollution in its many forms," said NNU Co-President Deborah Burger, RN. "As a society we need to reduce the effects of environmental factors, including climate change, that are making people sick, and endangering the future for our children. That's why we oppose the Keystone XL pipeline."
NNU is particularly concerned about the impact of climate change in hastening the spread of infectious disease, waterborne and food borne pathogens, and air pollution which already lead to significant health problems across the U.S.
Today, more than 40 percent of Americans live in areas adversely affected by air pollution with levels of particle pollution that can cause higher incidents of asthma, heart attacks, and premature death. Asthma is already a growing problem in the U.S. The Centers for Disease Control and Prevention says 10 percent of all U.S. children suffer from asthma.
Carbon emissions are a major factor in intensifying climate change. Higher air temperatures can increase bacteria-related food poisoning, such as salmonella, and animal-borne diseases such as West Nile virus. Ground level ozone contaminants can damage lung tissue, reduce lung function, and increase respiratory ailments.
In addition to toxic gas emissions, NNU also cited the high risk of spills along the proposed path of the pipeline.
On July 25, 2010, a tar sands oil pipeline ruptured near Marshall, Mi. The diluted bitumen traveled 40 miles down the Kalamazoo River to Morrow Lake. More than a month later, health providers reported 145 patients with symptoms associated with the spill. State officials surveyed 550 people from communities along the river and found 53 percent of the residents reported health problems - headaches, nausea and respiratory ailments.
The Michigan Department of Community Health reported an increase in rates of diagnosed cancers of the lung and bronchus in neighborhoods in southwest Detroit near oil refineries. The neighbors - many are too poor to move --are concerned even more as refineries will start to process tar sands oil from Canada, according to the Center for Public Integrity.
"Our leaders should be focused on finding safe, sustainable energy that would also help stem the increase in environmental pollution and climate change," said Burger. "The health of our world depends on it."
The nurses are also supporting a Robin Hood Tax - a small tax on Wall Street trades that could raise up to $350 billion a year. A portion of that money could go toward finding safe green energy to challenge the domination of the global fossil fuel industry and make a substantial contribution to addressing the global challenge of climate change. To learn more about the Robin Hood Tax, go to www.robinhoodtax.org
Source URL: https://portside.org/2013-02-07/nurses-oppose-keystone-xl-pipeline-cite-adverse-effects-increased-air-pollution-climate