What Was the Vietnam War About? 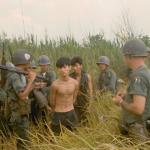 Was America’s war in Vietnam a noble struggle against Communist aggression, a tragic intervention in a civil conflict, or an imperialist counterrevolution to crush a movement of national liberation? Those competing interpretations ignited fiery debates in the 1960s and remain unresolved today. How we name and define this most controversial of American wars is not a narrow scholarly exercise, but profoundly shapes public memory of its meaning and ongoing significance to American national identity and foreign policy.

During the war years, America’s leaders insisted that military force was necessary to defend a sovereign nation — South Vietnam — from external Communist aggression. As President Lyndon B. Johnson put it in 1965, “The first reality is that North Vietnam has attacked the independent nation of South Vietnam. Its object is total conquest.”

Even more disturbing, Johnson quickly added (following a script written by his predecessors Harry Truman, Dwight Eisenhower and John F. Kennedy), the Communists in Vietnam were supported and guided by the Soviet Union and China. Therefore, the war in South Vietnam was not an isolated, local conflict, irrelevant to American national security, but rather one that was inseparable from the nation’s highest priority — the Cold War struggle to contain Communism around the globe. Further raising the stakes, policymakers warned that if South Vietnam fell to Communism, neighboring countries would inevitably fall in turn, one after another, like a row of dominoes.

Three decades later, Robert McNamara, a key architect of the Vietnam War who served as defense secretary for both Presidents Kennedy and Johnson, renounced those wartime claims — the very ones he and others had invoked to justify the war. In two books, “In Retrospect” (1995) and “Argument Without End” (2000), McNamara conceded that the United States had been “terribly wrong” to intervene in Vietnam. He attributed the failure to a lack of knowledge and judgment. If only he had understood the fervor of Vietnamese nationalism, he wrote, if only he had known that Hanoi was not the pawn of Beijing or Moscow, if only he had realized that the domino theory was wrong, he might have persuaded his presidential bosses to withdraw from Vietnam. Millions of lives would have been saved. If only.

In fact, however, in the 1960s, when McNamara advocated massive military escalation in Vietnam, he simply rejected or ignored any evidence that contradicted Cold War orthodoxy. It’s not as if contrary views were unavailable. In the work of the scholar-journalist Bernard Fall, the pages of I. F. Stone’s Weekly, speeches at university teach-ins and antiwar rallies and countless other venues, critics pointed out that after World War II the United States made a clear choice to support the French effort to re-establish its colonial rule in Indochina, and eventually assumed the bulk of France’s cost for the first Indochina War. It should have been no surprise, therefore, that Vietnamese revolutionaries perceived the United States as a neocolonial power when it committed its own military forces in the next war.

Moreover, critics argued, the primary roots of opposition to the American-backed government in Saigon were indigenous and deep rooted, not just in North Vietnam, but throughout the South.

Indeed, from the late 1950s through the mid-1960s the bulk of Communist-led fighting was carried out by southern guerrillas of the National Liberation Front, known to its enemies as the Vietcong. Only after the war was well underway did large units from North Vietnam arrive on the southern front. Antiwar opponents also challenged the claim that South Vietnam was an “independent nation” established by the Geneva Accords of 1954. Those agreements called for a temporary partition of Vietnam to be shortly followed by a nationwide election to choose a single leader for a unified Vietnam. When it became clear to both Saigon and Washington that the Communist leader Ho Chi Minh would be the overwhelming victor, the South Vietnamese government of Ngo Dinh Diem, with American support, decided to cancel the election.

Thus began a two-decade failed effort to build a permanent country called “South Vietnam.” The government in Saigon was never a malleable puppet of the United States, but it was nonetheless wholly dependent on American military and economic support to survive against its enemies, including many non-Communist parties and factions in the South.

Armed with these criticisms, many opponents of American policy in the 1960s described Vietnam as a civil war — not like the relatively clear-cut North-South division of the American Civil War, but a nationwide struggle of Communist-led forces of the South and North against the American-backed government in the South. By 1966, this analysis was even embraced by some mainstream politicians, including Senator William Fulbright, chairman of the Senate Foreign Relations Committee, and Senator Eugene McCarthy, who ran as an antiwar presidential candidate in 1968. Both men called attention to the “South Vietnamese civil war” to emphasize the strength of the southern insurgency and the failure of the Saigon government to gain the broad support of its own people.

By 1972, the idea that Vietnam posed a threat to Cold War America was so discredited, it sometimes sounded as if America’s only remaining war aim was to get back its P.O.W.s (President Richard Nixon bizarrely claimed that Hanoi was using them as “negotiating pawns”). Even more mind-boggling were Nixon’s historic 1972 trips to Beijing and Moscow. Many Americans wondered how Nixon could offer toasts of peace to Mao Zedong and Leonid Brezhnev while still waging war in Vietnam. As the journalist Jonathan Schell put it, “If these great powers were not, after all, the true foe,” then the war in Vietnam “really was a civil war in a small country, as its opponents had always said, and the United States had no business taking part in it.”

But alongside the “civil war” interpretation, a more radical critique developed — the view that America’s enemy in Vietnam was engaged in a long-term war for national liberation and independence, first from the French and then the United States. According to this position, the war was best understood not as a Cold War struggle between East and West, or a Vietnamese civil war, but as an anticolonial struggle, similar to dozens of others that erupted throughout the Third World in the wake of World War II. When the French were defeated by Vietnamese revolutionaries (despite enormous American support), the United States stepped in directly to wage a counterrevolutionary war against an enemy determined to achieve full and final independence from foreign control.

This interpretation was shared by many on the antiwar left, including Daniel Ellsberg, the once-hawkish defense analyst who turned so strongly against the war that he was willing to sabotage his career by making public 7,000 pages of classified documents about the history of the Vietnam War, the so-called Pentagon Papers. Ellsberg made his argument most succinctly in the 1974 documentary “Hearts and Minds.”

“The name for a conflict in which you are opposing a revolution is counterrevolution,” he said. “A war in which one side is entirely financed and equipped and supported by foreigners is not a civil war.” The question used to be, he added, “might it be possible that we were on the wrong side in the Vietnamese war. We weren’t on the wrong side; we are the wrong side.”

In the decades since 1975, all three major interpretations have persisted. Some writers and historians have embraced President Ronald Reagan’s view that the war was a “noble cause” that might have been won. That position has failed to persuade most specialists in the field, in large part because it greatly exaggerates the military and political virtues and success of the United States and the government of South Vietnam. It also falls short because it depends on counterfactual claims that victory would have been achieved if only the United States had extended its support for Diem (instead of greenlighting his overthrow), or tried a different military strategy, or done a better job winning hearts and minds. However, the war as it was actually conducted by the United States and its allies was a disaster by every measure.

In recent decades, a number of historians — particularly younger scholars trained in Vietnamese and other languages — have developed various versions of the civil war interpretation. Some of them view the period after the French defeat in 1954 as “post-colonial,” a time in which long-brewing internal conflicts between competing versions of Vietnamese nationalism came to a head. As the historian Jessica Chapman of Williams College puts it, “The Vietnam War was, at its core, a civil war greatly exacerbated by foreign intervention.” Others have described it as a civil war that became “internationalized.”

While these scholars have greatly enhanced our knowledge of the complexity and conflict in Vietnamese history, politics and culture, they don’t, in my view, assign enough responsibility to the United States for causing and expanding the war as a neocolonial power.

Let’s try a thought experiment. What if our own Civil War bore some resemblance to the Vietnamese “civil war”? For starters, we would have to imagine that in 1860 a global superpower — say Britain — had strongly promoted Southern secession, provided virtually all of the funding for the ensuing war and dedicated its vast military to the battle. We must also imagine that in every Southern state, local, pro-Union forces took up arms against the Confederacy. Despite enormous British support, Union forces prevailed. What would Americans call such a war? Most, I think, would remember it as the Second War of Independence. Perhaps African-Americans would call it the First War of Liberation. Only former Confederates and the British might recall it as a “civil war.”

I would reverse Chapman’s formula and say that the Vietnam War was, at its core, an American war that exacerbated Vietnamese divisions and internationalized the conflict. It is true, of course, that many Vietnamese opposed the Communist path to national liberation, but no other nationalist party or faction proved capable of gaining enough support to hold power. Without American intervention, it is hard to imagine that South Vietnam would have come into being or, if it did, that it would have endured for long.

Moreover, no other foreign nation deployed millions of troops to South Vietnam (although the United States did pressure or pay a handful of other nations, Australia and South Korea most notably, to send smaller military forces). And no other foreign nation or opponent dropped bombs (eight million tons!) on South and North Vietnam, Cambodia and Laos. The introduction of that staggering lethality was the primary driver of a war that cost three million lives, half of them civilians.

If we continue to excuse American conduct in Vietnam as a well-intentioned, if tragic, intervention rather than a purposeful assertion of imperial power, we are less likely to challenge current war managers who have again mired us in apparently endless wars based on false or deeply misleading pretexts. Just as in the Vietnam era, American leaders have ordered troops to distant lands based on boundless abstractions (“the global war on terror” instead of the global threat of “international Communism”). And once again, their mission is to prop up governments that demonstrate no capacity to gain the necessary support of their people. Once again, the United States has waged brutal counterinsurgencies guaranteed to maim, kill or displace countless civilians. It has exacerbated international violence and provoked violent retaliation.

Our leaders, then and now, have insisted that the United States is “the greatest force for good in the world” that wants nothing for itself, only to defeat “terror” and bring peace, stability and self-determination to other lands. The evidence does not support such a claim. We need a new, cleareyed vision of our global conduct. A more critical appraisal of the past is one place to start.

Christian G. Appy is a professor of history at the University of Massachusetts, Amherst, and the author of “American Reckoning: The Vietnam War and Our National Identity.”