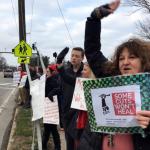 Around seven years ago, I had a standard wisecrack to explain the standing of workers in the world’s two dominant economies: “China has strikes but no unions; America has unions but no strikes.”

The remarkable upsurge of teachers in Republic-run, largely non-union states that has swept through West Virginia and is now sweeping through Oklahoma and Kentucky, and is poised to descend on Arizona, has returned the mass strike to the United States after decades of relegation to the history books. In each of these states, the teachers unions have something between limited and no legal rights to bargain collectively, and, correspondingly, represent just a hard core of members whose commitment to their union is more a matter of belief than of anticipated reward. And yet, able to mobilize even in non-union terrains through the use of social media, and outraged at their states’ continued opposition to funding public education, the teachers have leapt beyond law and formal organization to press their case.

Union leaders and members have played a key role in these actions, which have ballooned into statewide strikes. But so have rank-and-file teachers who haven’t been members, some of whom established the Facebook pages that they and their co-workers have used to develop their demands, organize their actions, and mobilize their peers. The fact that West Virginia’s teachers refused to go back to work after a preliminary deal was struck, persuading their leaders and colleagues to stay out until the deal was sealed, and then won their demands has clearly prompted their fellow teachers in other states to turn their righteous indignation at their state government’s decade-long starvation of public education into solidaristic militancy.

These actions signal a sea change in more than just labor relations.

These actions signal a sea change in more than just labor relations. They are of a piece with the revolt of the parents in Kansas, where the regressive tax cuts of the Republican governor and legislature had led to nearly a decade of inadequate funding of the state’s schools. Over the past 18 months, the good Republican parents of Kansas ousted so many trickle-down right-wingers in the legislature that the new legislature, overcoming the governor’s vetoes, raised taxes to restore school funding.

Indeed, what the Republican governors and legislators of Oklahoma, Kentucky, and Arizona are now discovering is that, contra the GOP’s Grover Norquist nostrums, their constituents actually don’t want a government so small it can be drowned in a bathtub. They at least want their kids to get an adequate education and want a government that helps them afford medical care and old age.

That’s why the teachers have found their communities supporting them, scaring the bejesus out of their Republican legislators to the point that those legislators have abruptly abandoned their Norquist pledges never to raise taxes, and discovered the political necessity of taxing and spending, at least on life’s basics.

The irony attending all these actions, of course, is the Supreme Court’s impending ruling in the case of Janus v. AFSCME, a case brought by the anti-union right, which, if the five GOP justices rule, as anticipated, for the plaintiff, will ban public employee unions, very much including the nation’s two mega-unions of teachers, from collecting even a fraction of union dues from those workers they are nonetheless obliged to represent in their dealings with management. While the various teacher uprisings are in no way calculated to offset the impact of a pro-Janus ruling, they nonetheless constitute a resounding Fuck You to the Republican justices, the Koch brothers, and other funders of anti-union activity, and the GOP legislators and governors who have inflicted the idiocies of trickle-down economics on their initially unsuspecting, now wised-up, states.

How far can these uprisings spread, how wide a swath of the workforce can they grow to encompass? As I noted in my article in the Spring issue of the Prospect, public support for unions, as measured by both Gallup and Pew, is now the highest it’s been in years, and among millennials, unions’ approval rating is an astounding 76 percent—a clear reflection, as was their support for Bernie Sanders, of the economic travails and injustices that millennials have encountered. Young people with skills that make them difficult to replace—teachers, professors, grad students, journalists, even the gamers who build those digital alternative worlds—have been flocking to unions.

So maybe—just maybe—we’re seeing a 21st-century version of 1934.

So maybe—just maybe—we’re seeing a 21st-century version of 1934. Helluva year, ’34. There were general strikes in San Francisco and Minneapolis, and wildcats all across the map—and this was one year before the enactment of the National Labor Relations Act, which gave workers the legal right to bargain collectively.

The 21st-century version of 1934 looks somewhat different, of course. Managers still routinely fire workers in job actions when those workers aren’t that hard to replace—that is, non-union workers in retail, food service, on assembly lines, on construction sites. That’s one reason why the percentage of professional and technical workers in unions—workers who are not easily replaced—has risen to more than 40 percent in the past decade.

What we’re seeing, then, is a white-collar rising, bolstered by the support of both white- and blue-collar parents. A handful of unions are still able to organize non-professional workers; UNITE HERE, which has a nearly 60,000-member local of hotel and casino workers with damn good contracts in right-to-work Las Vegas, is the exemplar here, with a secret sauce that other unions would do well to sample.

The risings of 1934 didn’t just embolden the Democrats to enact the NLRA the following year. In 1935, the year the New Deal turned left, they also enacted Social Security and a raft of other progressive legislation. Today, as in the 1930s, Democrats, faced with a leftward moving base, are scrambling to keep up, espousing views—strengthening Social Security, advocating single-payer health care, defending immigrants, even resurrecting the party’s commitment to full employment—that most Democratic pols wouldn’t have touched a decade ago. If they’re smart, they’ll also seek to catch up with their rank and file on the subject of worker rights: enacting, once they return to power, a law restoring real bargaining rights to employees, temps, and independent contractors, perhaps even—as Wisconsin Senator Tammy Baldwin has done—calling for a law that compels corporations to divide their boards between shareholder and worker representatives.

Who knows? Maybe America will once again have unions and strikes, as it did during the post–World War II decades, when not coincidentally—indeed, causally—it had a growing, thriving middle class.

Harold Meyerson is the executive editor of The American Prospect. His email is hmeyerson@prospect.org. Recent articles. Follow Harold Meyerson.