The Many Layers of Atlanta’s ‘Teddy Perkins’ 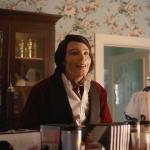 Presented without commercials, clocking in at 35 minutes, and packing in as much raw emotion and as many twists and turns as a feature-length thriller, “Teddy Perkins” is a gothic funhouse of an Atlanta episode, filled with warped mirrors reflecting different aspects of American and African-American experience, as well the preoccupations of the show’s creator, Donald Glover. It’s certainly the only episode of an American comedy series to end with a murder-suicide, and throughout the rest of its running time, it scrupulously observes (and one-ups) the now-established Atlanta stylistic MO, skating right along the edge of dreamlike or figurative action without quite crossing the line. By turns evoking What Ever Happened to Baby Jane?, Sunset Boulevard, Get Out, and the real-life stories of the Jacksons and Marvin Gaye, “Teddy Perkins” glides lightly over the possibility of being interpreted in any one way, and that’s the source of its eeriness. The episode itself is like the mansion that serves as its principal set, a chamber of secrets and horrors with many rooms, doors, and passageways, but only one way in and out.

Lakeith Stanfield’s Darius, in some ways the gentlest and most reflective of the show’s male leads, claims the spotlight here, driving to a mansion in a U-Haul truck to pick up a piano with kaleidoscopic keys. Darius’s odyssey introduces him to reclusive pop-star brothers, Teddy Perkins and Benny Hope. Teddy is played by Donald Glover in prosthetic whiteface, while Benny wears an elaborate mask disguise that evokes both the swathing of a Hollywood diva and the Invisible Man’s false face. Stevie Wonder provides the episode’s opening and closing soundtrack; near the end, his real-life blindness becomes a subject of conversation, treated as both physical fact and metaphor.

Darkness and illumination, blindness and seeing are woven throughout, befitting a story whose central character, Teddy, seems to view everything in binary, either/or terms, usually coming down on the side of an interpretation that’s laughably, horribly wrong. At one point he leads Darius into a room that he describes as a kind of museum of fatherhood, describing his own, terrifyingly controlling and abusive father (glimpsed briefly in an old 16mm home movie) as ultimately operating from a place of love, desiring only to produce excellence. “You’re saying your father used to beat you so you’d be good at piano,” Darius says, politely but with an incredulous edge. “To be good at life,” Teddy corrects him, then elaborates: “Great things come from great pain.”

There’s a showbiz story being told here, and it’s personal. Teddy is an abused child all grown up, and he has internalized his father’s cruelty to the point where it has become a lens through which he views himself. Darius’s initial meeting with Teddy has, as its centerpiece, an enormous ostrich egg that Teddy says is also called “an owl’s casket.” Ostriches are native to Africa; the owl is a symbol of prophecy, learning, and higher wisdom in many cultures, and the pairing of that bird with the word “casket” implies a death of those values, a condition that Teddy, in his high-voiced, grinning obliviousness, seems to exemplify. The egg, of course, is fertility, but there’s something singularly unnerving about making its emblem so gigantic here. The ostrich egg is cartoonishly oversized in a way that simultaneously confirms Teddy and Benny’s immense artistic potential and turns it into something grotesque. (Darius nearly vomits at the sight and sound of the fluids gurgling out of the egg as Teddy sloshes around in it with his bare hand.) The perversion of this symbol of life connects with the stories Teddy tells about he and his brother having excellence beaten into them by their father (“to be good at life”), a character explicitly likened to Joe Jackson, who once told little Michael right before a concert that there were snipers up in the rafters who would shoot him dead if he missed a single step.

There’s another layer here, though, and it’s racial-political — or at least it could be; as I said up top, Glover traffics in analogies and symbols, but he’s very open-ended in how he deploys them, going for plausible deniability so that he can just say, “Oh, that egg is just an egg,” etc. I don’t think it’s an accident that the mansion where these two black men live resembles a plantation (as the house in Get Out did), or that Darius begins the story by ironically purchasing a cap with a confederate flag symbol and “Southern Made” and then defacing it with a red Sharpie so that it reads “U Mad,” or that Teddy’s face is whitened like Michael Jackson (a reaction that Jackson said was a result of vitiligo, while armchair psychologists attributed it to both racial self-loathing and an abused child’s wish to obliterate any trace of his old self). I don’t think it’s random, either, that when Teddy leads Darius into his shrine room, the “father” is white and looms over the two black men, one of whom (Teddy) is out of his mind with pretzel-logic adoration while the other (Darius) looks on with appalled amazement.

There’s an equation here of the abusive black father (who only wanted his children to succeed in the white man’s country, and in a white-run industry) and the “Great White Father” of Uncle Sam, insisting that everything the country does, no matter how depraved, is ultimately for the good of its citizens, in the name of apple pie, motherhood, and self-improvement. The Invisible Man referenced in this episode is the title of a book by H.G. Wells, but it’s also one by Ralph Ellison. The former is science fiction, the latter a novel about a black man whose color renders him “invisible” to white culture. In “Teddy Perkins,” the black man whose face has become white gets shot by the brother whose face remains hidden — a character who is literally crippled and locked away in a basement, the place where (according to various colloquial expressions) we keep our crazy relatives. In the end, we’re left with a feeling of relief at having escaped this madhouse, if only for a moment, as well as a deep feeling of sadness that Darius was unable to save either man, and had to be content only with saving himself.