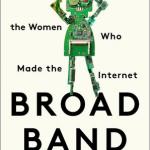 Broad Band: The Untold Story of the Women Who Made the Internet

The story of human progress as a species is often told through the progression of the technologies we’ve developed, all of which converge inside the box of the computer—from the large mainframes developed in the years of World War II that took up entire rooms, to the handheld devices we carry with us everywhere we go today. But computers have a longer and richer history than that. Claire Evans, in her new book Broad Band, reminds us that “for close to two hundred years, a computer was a job.”

Alone, women were the first computers; together, they formed the first information networks. The computer as we know it today is named for the people it replaced, and long before we came to understand the network as an extension of ourselves, our great-grandmothers were performing the functions that brought about its existence.

It was women computers that “cataloged the cosmos, charted the stars, measured the world, and built the bomb.” And when computers became the physical objects they’ve become to be known as today, it was women who animated them, who gave them their ability to do what they had always done—which was the math. This is, in part, the story Claire Evans tells. It is story of Ada Lovelace explaining Charles Babbage’s ideas of the “Difference Engine” and “Analytical Engine”—widely considered to be the first mechanical computers—to the world, and detailing how they would work. It is the story of Grace Hopper and the ENIAC Six—women who not only programmed the first computers during World War II, but figured out how they would work without a user manual and reverse engineered them to write the user manuals that didn’t yet exist for them. This was at a time when a computer was something you stood in, rather than sat at, in which you were punching cards and patching cable. In the process, they developed some habits that would become cornerstones of programming that still exists today:

When Grace’s code got thorny, she made a habit of annotating the master code sheets with comments, making it easier for colleagues to unravel her handiwork later. This system of documentation became standard practice for programmers, and it still is: good code is always documented.

Grace Hopper was also one of two people—along with Richard Bloch—who “invented coding syntax and workarounds for the way code is written to this day.”

As early as 1944, Grace realized she she could save herself from rewriting code from scratch for each problem by holding onto reusable scraps, which came to be known as subroutines.

Grace Hopper got her start in programming on the Mark I, which ran calculations around the clock for the war effort in World War II—some of which ended up in the development of the atomic bomb. The ENIAC wasn’t completed in time to make a contribution to the war effort, but it’s development would be a precursor of the civilian computers that were developed in the wake of the war. And yet, the six women who figured out how to operate the thing without a manual and then programmed it by hand weren’t even invited to the lavish celebration of its first successful demonstration before the scientific community—a demonstration that they had spent the previous weeks feverishly programming into the machine, and which many thought would be an almost impossible task. It turned out it was just a thankless one:

When the army uses a War Department publicity shot of the ENIAC for a recruitment ad, they cropped out the three women in the picture entirely. The War Department’s own press release about the ENIAC cited a vague, genderless “group of experts” responsible for the machine’s operation …

Kathleen McNulty, Betty Snyder (now Betty Holberton), and Betty Jean Jennings, along with Grace Hopper, would also form the programming core of one of the first commercial computer companies—Eckert-Mauchly Computer Corporatation, or EMCC—and would write the operational code for the UNIVAC, which was the most powerful computer in the world at the time and dominated the competition in the early days of the civilian computer industry.

Because it was men who built the machines these women programmed, Claire Evans discusses the temptation to equate software with women and men with hardware, noting that women ended up in that work mostly because—being considered more akin to a secretarial or switchboard operator position—it was all that was available to them.

At the time, it was difficult to perceive of programming as an occupation distinct from simply operating a computer and, indeed, the ENIAC women’s jobs were officially classified as “subprofessional, a kind of clerical work.” It would be years before those who approached computers began to define themselves in relation to them, as programmers and computer scientists, rather than as operators or electrical engineers. It would take even longer before a vision of programming as an art form with the potential to reshape the modern world came into focus.

Unfortunately, the men who built both the ENIAC and UNIVAC computers weren’t as adept at building a business around it, and Eckert and Mauchly were eventually forced to sell the company. After a deal with IBM couldn’t be struck, they went to Remington Rand, which wasn’t as progressive in their understanding of what the women brought to their work.

Nobody at Remington Rand had ever worked with technical women, and they resisted the idea that a woman could lead a presentation, meet with clients, or even understand the UNIVAC installations they had designed.

And yet, after Remington-Rand’s traditional sales and marketing teams failed to sell the machines—or even able to understand what they were capable of in order to do so—Grace Hopper and her team of programmers were forced to take on the selling and marketing themselves, along with handling the customer support once the machines were delivered, essentially doing three jobs in one. Unfortunately, not many were actually delivered.

Remington Rand management forcibly scaled down production of the UNIVAC to six a year, but after two years of the programmers handling sales, they’d sold forty-two machines.

Even under these difficult working conditions, Hopper would, while at Remington-Rand, develop the first compiler that allowed code to write other code, and would use her connections to the Navy department to convene the Conference on Data Systems and Language (CODASYL) in 1959, which was tasked with creating a universal business language that would work on any machine. A group of three women formed there (among them Betty Holberton) would go on to write COBOL that same year, the first common business oriented computer language that would work across different computer platforms. (The two-digit convention COBOL used to display the year would lead to the hysteria over the “Y2K bug” 40 years after it’s development, as the language was still used in 80 percent of all existing code.)

Despite these contributions, and despite the fact that women made up between 30 and 50 percent of all programmers in the workforce through the 1960s, they were not paid commensurate with their positions or achievements. Evans documents, as Emily Chang did in Brotopia (which we reviewed here recently) how programming quickly transitioned from a field associated with the women who invented it, to an engineering profession dominated by men as the industry took off after the war, until:

By 1984, the number of women pursuing computer science degrees in the United States began to dive, and it has kept diving to this day, a decline unrivaled in any other professional field.

But women never stopped making contributions to the field. In fact, they remained in the vanguard of new developments that have brought us into the internet age. Evans tells the story of Pam Hardt-English, who managed to get a mainframe computer donated to a commune called Project One in 1972, where it was used to keep a Social Services Referral Directory that could “help the most disadvantaged people in the city gain access to services.” The group that ran the mainframe was entirely female, and when they disbanded the commune, they donated the directory to the United Way. It was such a valuable resource that it was maintained by the San Francisco Public Library until 2009.

She tells the story of Elizabeth “Jake” Feinler, who put together the Resource Handbook that, “weighing in at one thousand pages … was a record of every node, institution, and person keeping the ARPANET running.” ARPANET was, of course, the precursor to the modern internet.

Putting the Resource Handbook together made Jake an instant authority on the ARPANET, and she eventually built the Network Information Center from a two-person operation into an eleven-million-dollar project, taking on all the major organizational responsibilities of the growing network. Working with a largely female staff, she created the ARPANET Directory, comprising, along with the Resource Handbook, the “electronic yellow and white pages” of the early Internet.

“The NIC,” Evans writes, “was the Google of its day.” She tells us of Radia Perlman, who  “invented the protocols that would have an indelible effect on the robustness and stability of all computer networks”; Stacy Horn, who started Echo—New York’s first online community—”which was just a server and a stack of twenty-four-hundred-baud modems in Stacy’s living room”; Dame Wendy Hall and Cathy Marshall and the development of hypertext that made the World Wide Web possible, another discipline that was “heavily populated by women” in its development.

What Claire Evans has done in Broad Band is help complete the story of recent technological progress by filling it in with the people—largely women—who built the languages and protocols on which the computer, and the network that ties them together, runs. It all helps support her belief that:

We can remake the world.

The first step is to see it clearly, seeing who was really there at the most pivotal points in our technological history, without taking for granted the prevailing myths of garages and riches, of alpha nerds and brogrammers.

“The real technology,” Claire Evans writes, “is the user.” And the story of human progress as a species is not in the boxes we build, but in how they are put into the service of people and how they enrich human lives. Broad Band tells the stories of the women who have been at the forefront, and at the heart, of that work.

Dylan Schleicher has been a part of the 800-CEO-READ claque since 2003. Even though he's stayed on at the company, he has not stayed put. After beginning in shipping & receiving, he joined customer service and accounting before moving into his current, highly elliptical orbit of duties overseeing the ChangeThis and In the Books websites, the company's annual review of books, and in-house design. He lives with his wife and two children in the Washington Heights neighborhood on Milwaukee's West Side.