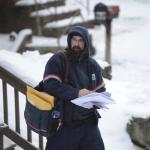 ome may be inclined to think that Donald Trump’s executive order Thursday night establishing a task force to recommend reforms for the U.S. Postal Service reflects another salvo in the president’s war against Amazon. Trump’s attack on Amazon, a clear byproduct of Amazon CEO Jeff Bezos’s ownership of The Washington Post, included the suggestion that the online retailer was “ripping off the post office” by securing a special deal for the USPS to ship packages the last mile. By reviewing the finances of the post office, Trump’s task force could demand increases to that shipping contract, possibly costing Amazon billions of dollars.

Whether Amazon actually is getting a special deal on shipping is open to intense debate. The company also happens to enjoy a discount on stamps, which they then mark up to their own marketplace sellers, a pure arbitrage deal to earn profits from a publicly issued product.

But these issues have almost nothing to do with the Trump executive order. The Amazon spat is a cover for the formal unveiling of a long-wished right-wing project to destroy the post office and have private industry take over its infrastructure, which taxpayers funded long ago. All the executive order really does is create a report; it would take a willing Congress to deliver the final hammer blow. But that report, with a government imprimatur, will become part of that right-wing wish list, living on for decades in think tanks and private shipping company boardrooms as a fervent dream.

Let’s look at the executive order, which is a bit deceptive in its intentions. The policy section manages to mention that the Postal Service routinely earns the highest public approval rating of any agency in the federal government. But then it layers on the bad news: the decline in first-class mail volume—$65 billion in losses since 2009, an “unsustainable fiscal path.”

Amazingly, the policy section alludes to the inability of the USPS to fund retiree health and pension benefit obligations, without stating that it has the impossibly high statutory burden of pre-funding those obligations 75 years out, effectively having to pay today for future workers who have not yet been born. No public agency or private company has any similar burden. It was placed on the Postal Service in the 2006 Postal Accountability and Enhancement Act to deliberately cripple the agency at the behest of UPS and FedEx, its two major competitors on package delivery. There should be no confusion: Without this completely anomalous pre-funding mandate, the USPS would be a money-making operation, regardless of the rise of email.

But while alluding to “inflexible costs,” the executive order says that the USPS “must be restructured to prevent a taxpayer-funded bailout.” Yet, a true restructuring would require only one line of legislative text: “The 75-year pre-funding mandate is hereby repealed.” The fake crisis would be over. But that’s not what Donald Trump’s minders want.

The executive order establishes a task force, chaired by Treasury Secretary Steven Mnuchin, to “evaluate the operations and finances of the USPS.” Also on the task force are anti-government zealot and Office of Management and Budget Director Mick Mulvaney, former Booz Allen Hamilton lawyer and Office of Personnel Management Director Jeff Pon, and whomever else Mnuchin wants to throw in.

In reality, there’s already a “task force” empowered to evaluate the Postal Service. That’s the USPS Board of Governors, an 11-member panel that operates like the board of directors of a corporation, empowered to review all policies and practices and engage in long-range planning. But this board, which includes the postmaster general, their deputy, and nine presidential appointees, has not had a new member confirmed since the George W. Bush administration. It’s been operating without a quorum since 2015, and currently all nine appointee positions are vacant. The Trump administration took until October of last year to nominate three of the open nine governor seats; they’re only getting a confirmation hearing next week.

I think the goal is clear. The task force is being prodded to open up the mailbox to any company, and degrade the centuries-old tradition that the post office deliver anywhere in the nation, through snow or rain or heat or gloom of night. After eliminating these public benefits, the task force might seek to bar the post office from competing in markets where the private sector operates, or to privatize the agency altogether, selling its infrastructure off for parts.

These have long been hard-right fantasies, which, if made real, would be a direct money funnel to UPS and FedEx’s corporate treasuries, to say nothing of Amazon, whose cash reserves could easily buy Postal Service infrastructure. In fact, the executive order says that the final report should take into account the views not only of postal workers and consumers, but also of “competitors in the marketplace.”

This report of “administrative and legislative reforms” to the post office is due August 10. Legislative recommendations would obviously have to pass Congress, and that’s unlikely even today, given the important role the post office plays in rural communities.

But we’ve already seen bids to privatize and undermine the Postal Service administratively. In 2013, the Postal Service partnered with Staples to sell stamps and deliver mail and packages inside their stores, with their non-union workers. The American Postal Workers Union kicked off a long campaign to stop this, but the practice only stopped after a National Labor Relations Board judge ordered it. Trump’s NLRB might not have the same posture if the “Approved Shipper” program were restarted.

The USPS already gives competitors a sweet deal to participate in its own destruction. It ships the last mile for UPS, FedEx, and Amazon, delivering the packages that are unprofitable for those companies to deliver themselves. And the Postal Service’s leadership has repeatedly cut employee hours and eliminated routes, closing post offices and laying off tens of thousands of workers in the process. Having a government task force call for the death of the post office will build on these efforts at self-immolation.

The solutions here are obvious. The post office has the advantage of 30,000 locations, universal service, and a wider reach than for-profit companies could ever cast. Returning to the postal banking system we had from 1911 to 1967, which offers financial services to the unbanked with simple accounts and even small loans, would fit the agency’s mission of expanding commerce and save billions for vulnerable populations—all the while shoring up postal finances. The author of a 2014 white paper on postal banking, then-USPS Inspector General David Williams, is one of the nominees for the Board of Governors, and if allowed to do his job, Williams could fix up a system that would solve numerous problems at once.

This is one of a many ideas to maintain the Postal Service’s strong position at the center of American life, where it’s been since before the Constitution was written. Instead, Donald Trump, while claiming fake concern for the USPS getting “ripped off” by Amazon, wants to empower a gang of cretins bent on selling off the agency for parts.

This article has been updated.

David Dayen is a contributing writer to Salon.com who also writes for The Intercept, The New Republic, and The Fiscal Times. His first book, Chain of Title, about three ordinary Americans who uncover Wall Street's foreclosure fraud, was released by The New Press on May 17, 2016.