On The Crest Of A Strike Wave 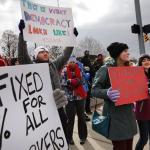 When the West Virginia teachers and support staff won their strike, elements of the Left heralded it as a sea-change with all of the fervor of fundamentalist hot gospellers. It’s hard to fault this kind of enthusiasm. There’s been precious little reason for it for decades; the horizontalist insurgencies against the World Trade Organization and Wall Street captured imagination, but failed to create enduring movements with the power to arrest the forward march of neoliberal capitalism. With labor teetering on the brink of ruin and a rising reactionary tide at all levels of politics, signs of militant life are like an unexpected oasis in the desert.

Surely, a big strike’s victory means that the tide is turning, even only just a little bit, right?

It’s reminiscent of nothing so much as the radical Scots Presbyterians of the late 19th century: Ulster men and women that believed that the social and political unrest that would soon erupt in armed rebellion was a sign of Christ’s coming. Occasional millenarian thinking isn’t new to the Left: there is always some crank predicting that the workers’ revolution will manifest itself when the social conditions are just right. This analysis falls apart because it treats politics as a game of signs and portents, rather than a discipline requiring careful analysis. With such thinking layered on top of the dogmatic disputations between Left sects, one could be forgiven for mistaking some Left currents for Reformation theologians engaged in bitter dispute over John Calvin’s writings or the particular meaning of religious scripture.

To believe that the West Virginia strike was a natural expression of the correct alignment of social forces isn’t just wrong, it sells West Virginians short. The teachers, paraprofessionals, and support staff in West Virginia didn’t win because of the bending of a cosmic arc; they won because of months of preparation and organizing, an impressive level of community outreach, and the strategic leveraging of county-level school management to provide political cover for the strike. In other words, as detailed by Bryan, West Virginians won because they did what strikes need to do: carefully and painstakingly build and organize a potent expression of working-class power.

Their success of the strike was predicated upon years of miserable decline, but that success is hardly reducible to the conditions that led them to walk out. It was a victory, and one rightly celebrated. It was also won because of the willingness of teachers and support staff to dig in for the long haul and buck a bad deal foisted on membership. There’s no way around it: they won not just in defiance of the law, but their own state-level leadership. Moreover, their victory showed the potential of the strike in a way that even the rightly celebrated 2012 Chicago teachers strike did not: it showed that even in deep-red areas thought of as bastions of reactionary politics, workers can fight and win in the face of slash-and-burn austerity. Since then, action has spread to Kentucky, Oklahoma, Puerto Rico, Arizona, and Colorado, with rumblings of militancy elsewhere.

What it didn’t show is that the fight would be easy, and the seeming collapse of the Oklahoma strike should be a sharp reminder that no road to progress is easy or guaranteed.

Although we should celebrate our victories, the aftermath of West Virginia and bold pronouncements of a march of victories led too many to believe that victory was assured elsewhere, in spite of grim political terrain and a lack of organization and preparation. Moreover, labor commentators have unwisely portrayed spasmodic unrest (in terms divorced from the organizing and infrastructure it takes to sustain it) as a means toward building enduring power.

Left behind in this discussion is a simple fact that should lead us toward caution: West Virginia and Oklahoma school employees struck in 1990, and it produced no enduring shift in the power relations between workers and management. When I visited the strike line in Wheeling, teachers remarked—with some weariness—that it was the second time in their careers they had to strike to maintain basic levels of compensation. Moreover, other comments—such as a rank-and-file organizer’s support for eliminating the federal Department of Education—indicated that militancy does not naturally transmute into solidarity. It should be noted that right now the union at the federal Department of Education is right now under the gun of the most vicious union-busting in the federal sector since the destruction of PATCO.

There were and are reasons to be deliberate about attempts to replicate what happened in West Virginia. Before they went public West Virginia teachers planned for months and gradually built a powerful level of internal organization and consensus on their goals and direction. In contrast, Oklahoma’s strike was pulled together with little of that kind of painstaking preparation and organization that made the strike in West Virginia successful and without the deeply embedded culture of unionism and solidarity that pervades large segments of Appalachia. Teachers (and Left observers eager to take part) funneled into chaotic Facebook groups in which an unorganized mass attempted to sort out both goals and strategy.

That lack of mid-level leadership and structure is the key difference between West Virginia’s strike and Oklahoma’s. With it (and with West Virginia having only 55 school superintendents whose arm you needed to twist into closing school, as opposed to the 520 in Oklahoma), the striking workers were much better positioned for sustainable pressure against the austerian governments in West Virginia than they are in Oklahoma. An early warning sign was the push to strike early, during testing week, under the theory that it maximized leverage. It was reminiscent of the push among some segments of AT&T workers to strike early during the iPhone 8 launch, despite the fact that the bargaining CWA locals hadn’t yet reached sufficient internal support and organization to strike from a position of strength.

Striking workers generally prevail when they undertake the strike when they’re ready, and on their own terms. The next time these workers prepare to withhold their labor, I would bet money that it will look very different from this time.

Even before the Oklahoma Education Association called for the strike’s end, Oklahoma’s public employee union ended their support for demonstrations at the state capitol. Oklahoma Education Association leaders indicated that a majority of their membership is uncertain about the strike’s future, and that’s likely true in the face of the legislature’s intransigence about education funding.

This is no critique of the workers of Oklahoma. They risked much and fought hard, and did so because many could no longer stand the grinding scorched-earth austerity issued by legislative fiat and stamped with Mary Fallin’s imprimatur. It is an austerity that threatens not only them, but the future of every child in Oklahoma. No worker that withholds their labor in the pursuit of economic and social justice deserves condescension, no matter their ultimate success or defeat. But we need to learn from the strike’s seeming failure. To build on West Virginia’s success, we must be reminded that no victory is assured, and that we are fighting enemies of extraordinary power. To genuinely organize to defeat them, we must treat the strike seriously as an instrument of working-class power.

And we must resist the temptation to treat worker struggle as a fetishized gesture where Left activists are tourists on holiday.

C. intermittently tweets as @thehousered and works as staff for an education union in rural America.