No Loopholes, No Exceptions 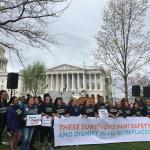 On 24 April 2018, over 200 domestic workers, farmworker women and allies came together for the Unstoppable Day of Action at the U.S. capitol, calling on lawmakers to pass sexual harassment protections for all workers. After a press conference in the morning, a delegation of women led by the National Domestic Workers Alliance (NDWA) and the Alianza Nacional de Campesinas (National Farmworker Women’s Alliance) visited over 60 members of Congress  from both chambers to discuss legislative solutions to sexual harassment. Specifically, they are calling on employers, lawmakers, and advocates all over the United States to:

For decades, domestic workers and farmworker women have been systematically excluded from labour protection laws and have faced extensive barriers to justice for sexual harassment, among other forms of abuse. Most have no human resources department to turn to, and are not covered by Title VII, the federal anti-discrimination law that prohibits sexual harassment, as the law currently only applies to workplaces with 15 employees or more. Since most workers in the care sector are the only or one of just a few employees in their workplace, they – along with independent contractors – fall beyond the purview of this federal labour protection instrument.

“It’s happening to us because we are invisible workers,” said Teresa Arredondo, farmworker leader from Alianza de Campesinas. Throughout the 32 years that Arredondo worked in the fields, she experienced multiple kinds of exploitation and discrimination, including sexual violence in the workplace. As Arredondo concluded her statements at the podium, farmworker women and domestic workers stood holding a banner with the words “THESE SURVIVORS WANT SAFETY AND DIGNITY IN ALL WORKPLACES” and chanted “We see you. We love you. Thank you.”

The isolated and invisible nature of farm work – which occurs on remote fields or packing houses, with limited access to public transport – and domestic work, which often takes place behind the closed doors of the employer’s home, makes it especially difficult for these workers to organise and access the very limited recourses available to them for reporting instances of sexual violence in the workplace.

“Many of them don’t even know about the existence of the limited law we are trying to expand,” Myrla Baldonado, an organizer of the LA-based Pilipino Workers Center, told Beyond Trafficking and Slavery after the rally, further highlighting the need for resources to be more accessible to all workers, regardless of their cultural, linguistic and migratory background.

Ai-jen Poo, executive director of the NDWA emphasised the historical significance of the Unstoppable campaign, which brings together two of the groups that are most commonly excluded from labour protections “What’s amazing about this moment is that we are not alone,”  said Poo, “our solutions leave no one behind.” Actress, producer, and TIME’S UP founding member Olga Segura, who was also present at the action, echoed this point, stating: “If the law does not protect all of us, then the law is not good enough and must change”.

Our solutions leave no one behind.

As the experience of these women has shown, immigrants and women of color are especially vulnerable to sexual harassment in the workplace. During her turn at the podium, longtime immigrant-rights activist and Congresswoman Pramila Jayapal (WA-07) acknowledged that low-income, immigrant women of color bear a disproportional burden of the injustice, and spoke about the need for comprehensive immigration reform to address some of the root causes of sexual and labour abuses.

The legacies of exclusion that now shape the conditions of domestic and farm work were a recurrent theme throughout the press conference. June Barnett, home care worker, organizer, and leader with the We Dream in Black program of the NDWA, poignantly said: “Our work has deep roots in slavery. They still see us as the help. Nothing is different.”

Monica Ramirez, President of Alianza Nacional de Campesinas reiterated Barnett’s point: “Farmworkers and domestic workers –most of which are immigrant women and women of color – cannot pretend that we were accidentally written out of the federal laws that guarantee protections to other workers.”

As such, implementing the Unstoppable campaign’s demands entails much more than simply improving an inadequate system, it would also be what Baldonado considers “correcting a historic wrong”.

As public and political attention on the issue of sexual violence in the workplace increases with the continued flow of #MeToo disclosures, domestic workers and farm worker women are shining a light on solutions for workers who have been historically and systematically marginalised and excluded from existing labour laws. The Unstoppable campaign is particularly significant, as it constitutes an important example of what organising across sectors can achieve.

Want to take action? Click here to tell Congress to extend Title VII of the Civil Rights Act, the federal employment law that prohibits discrimination, so that all workers are covered.

Penelope Kyritsis is an assistant managing editor for Beyond Trafficking and Slavery and a freelance researcher on global labour issues. She co-authored ‘Confronting root causes: forced labour in global supply chains' and co-edited ‘Domestic workers speak: a global fight for rights and recognition'.  Follow Penelope on Twitter @_penelopeCK.