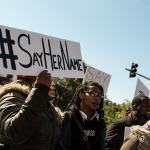 A 34-year-old Black mother is shot as she steps out of a burning car by police who are supposedly there to help her. This scenario -- the recent police killing of Decynthia Clements -- is also part of the story of police violence, and is also emblematic of broader patterns. But, chances are, you haven't heard about it. Like many instances of police violence against Black women, it remains invisible because it doesn't fit into the "standard" narrative. Yet this, too, is a story that should spark collective outrage and inform our demands for justice.

The Death of Decynthia Clements

Police first came into contact with Decynthia Clements in the suburbs of Chicago when they found her parked on a dead-end street. She was committing no crime and posed a danger to no one. When the police approached, she drove away. The officers decided not to pursue her -- nor did they really have any reason to, although they claim she ran a stop sign. They later found her car parked on the shoulder of Interstate 90. Somehow, she had lost two tires in the intervening time, and her car showed signs of damage.

When officers first approached her by the side of the highway, it was clear that Decynthia was in distress. They claim they saw a butcher knife and a screwdriver in the car -- both common household items, both read as weapons in the hands of a Black woman in crisis. One officer said he saw a white powder on her hand, and assumed it was crack cocaine -- as opposed to, say, talcum powder or any number of other substances that might look similar, automatically reading a Black woman as a drug user. The officers retreated and began to negotiate with Decynthia about getting out of the car. During this time, they accessed a report that she had told a therapist that she had been suicidal and experienced hallucinations.

But instead of calling for experienced medical professionals, officers continued to respond to a Black woman who had committed no crime and posed no danger to anyone (other than perhaps herself) with orders to get out of her car, and threats of arrest -- again, it is not clear for what. After she moved her car forward a few feet a few times, officers eventually blocked her in with two police vehicles.

After about an hour, Decynthia told police she would get out of her car after she smoked a cigarette. Video footage released by the department shows officers discussing what to do when she did -- including using rubber bullets or a TASER if necessary. And then, as she stepped out, gagging from the smoke of a fire that had broken out inside the vehicle, before she had taken more than a step or two, the lead officer on the scene shot her in the head within seconds, killing her, reading her hasty exit from a burning car as a deadly threat.

A Broader Pattern of Police Shooting Black Women in Distress

Decynthia -- like Saheed Vassell, who was killed by Brooklyn police last week, and like up to half of people killed by police -- was (or was perceived to be) in a mental health crisis at the time she was shot. She became one of the many Black women whom police officers were called to assist but ended up killing instead: Deborah Danner, Kiwi Herring, Charleena Lyles, Aura Rosser, Tanisha Anderson, Michelle Cusseaux, Eleanor Bumpurs.... The list is long and painful.

All are victims of our collective failure to imagine, invest in and insist on responses to people in distress that don't involve armed police officers.

Decynthia also fell prey to perceptions of Black women as inherently threatening. According to a recent study, 57.2 percent of killings of Black women occur when they are unarmed, making Black women "the only race-gender group to have a majority of its members unarmed when killed." Researchers concluded that their "results imply that black women are racialized in ways ... that put them at a greater relative risk of [fatal police encounters] when unarmed."

In other words, more often than any other demographic, Black women are falsely perceived as a threat that must be met with deadly force by police officers.

This explains how an officer (who knew the right thing to do was to use non-lethal force if necessary) instead instantly shot with intent to kill a Black woman who was stumbling out of a burning car. The police shot Decynthia as she was advancing in the only direction possible when opening a car door -- toward the back of the car, away from the smoke, where the officers who were calling for her to come out were standing. Deeply entrenched notions of Black women as "deranged," animalistic and deadly -- developed to justify their brutal treatment during slavery and beyond -- likely drove the officers' perceptions of threat. Such perceptions have proven fatal for countless Black women like Decynthia, including Kayla Moore, Bettie Jones, Margaret Mitchell and LaTanya Haggerty. Again, the list is long and heartbreaking.

"It was like murder," Charles Clements, Decynthia's father said after watching the video of her killing. "Somebody coming at you is one thing, but she fell out that car and they start shooting her, that's terrible, just awful. The car was burning, obviously she was gasping for air, and when she managed to get the door open, she just fell to the ground and then the shots started going."

Holly Clements, Decynthia's sister-in-law, describes her as "a good mom" who reached out to everybody and had "numerous nieces and nephews that she always picked up and did things with," adding, "it's just a really sad moment for the family that we've lost somebody who has such a big heart."

Decynthia Clements's family -- including her 19-year-old son in college -- are now left to grieve their mother, daughter, sister and cousin, and to await the outcome of investigations by the Illinois State Police, the Cook County State's Attorney's Office and the Elgin Police Department, which employs Lt. Christian Jansen, the officer who shot Decynthia, and who is now on paid administrative leave.

Some commentators are trying to justify Jansen's actions, and mainstream news coverage leads with his commendations and dismisses the prior record of complaints against him regarding racial discrimination and the use of excessive force. While these elements of Decynthia's story are familiar, they have not been the subject of much national discussion -- despite daily protests led by Decynthia's family and community outside the Elgin police department until the department released video footage of the events leading to her death.

Now that the footage has been made public, Decynthia's family and attorneys say they will wait for the outcome of the investigations and legal process. Members of the Elgin community have called for the creation of a civilian oversight agency to investigate cases like Decynthia's, citing distrust of the investigation being conducted by the Illinois State Police.

"People are going to see for themselves," Decynthia's brother Chevelle says. "Now this is not just an angry family demanding justice, but this will be a community as a whole that will see exactly what happened, what shouldn't have happened."

The Supreme Court's recent decision in Hughes v. Kisela does not bode well for the possibilities for justice in Decynthia's case. Seven justices -- with the exception of Sonia Sotomayor, who penned a scathing dissent, joined by Ruth Bader Ginsberg -- essentially endorsed a Tucson, Arizona, officer's 2010 shooting of a woman who was standing in her own yard holding a kitchen knife while speaking to her roommate, who stood six feet away. Hiding behind the ever-expanding doctrine of "qualified immunity" -- which essentially says that even if an officer violated someone's constitutional rights, they can't be held liable for it if the right wasn't clearly established at the time -- the majority found that the officer could not reasonably have known that shooting the woman under these circumstances would violate her constitutional rights.

Nor does a recent court decision dismissing the case brought by the family of Kayla Moore, a Black trans woman and beloved aunt, sister and daughter. Moore suffocated to death after police who were called to her home to assist her in the midst of a mental health crisis instead tackled her face-down against a futon and piled on top of her. As her sister Maria Moore -- a fierce advocate for justice for Kayla and for improved responses to people in mental health crisis -- described in a recent radio interview, "instead of trained mental health professionals, she got police.... Trans people are already seen as nonconforming, already seen as a troublemaker.... They came at Kayla like she had killed someone.... What was Kayla's crime?" The court hearing the family's case nevertheless dismissed claims of excessive force and dismissed claims that the Berkeley Police Department is in violation of the Americans with Disabilities Act for failing to reasonably accommodate the needs of people in mental health crises. The family plans to appeal the decision, and Moore declares, "It's not over. We are going to take this where it needs to go, and that's the Supreme Court."

The more complex circumstances of many Black women's deaths at the hands of police -- during an eviction, when opening the door to let police into a home to assist a neighbor, during a domestic violence call, following a call about transphobic and homophobic neighbors, or following a call for help from a friend or family member seeking support for a loved one -- require us to step back and examine how they came into contact with the officers who killed them in the first place, and how things might have gone differently had they received the support they deserved instead of a police response. They require us to look at how we value Black women's lives -- both when they are alive and not receiving the care and help they need, as well as after they have been killed by police.

Their stories, which might be complicated and take more than Twitter's character limit to tell, bring into sharp relief the reality that there is no safety for Black women, whether they are sitting in their own cars or standing in their own backyards. There is no safety in police responses to calls for assistance for people in crisis, and no justice in the courts for Black women.

As Maria Moore put it, "If you want something as simple as mental health services or just help, you're bringing in militarized police. And their thing is not about helping you, it's about controlling you.... They don't want to hear you, they just want to silence you."

We owe it to the memories of Decynthia Clements, Kayla Moore and so many more Black women to tell their stories of police violence and to protest the injustices done to them and their families. It is our duty to demand accountability for the officers who killed them, to challenge the dehumanizing narratives about Black women that drove the killings, and to demand responses to people in mental health crisis that involve care and compassion, not policing and punishment.

Decynthia Clements. Let's say her name and make sure her story, too, shapes the solutions we seek to the plague of police violence against Black lives.