Debate: How Should Unions Deal With Free Riders? 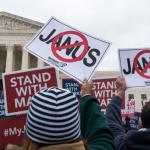 The U.S. is quickly becoming an open-shop country. A majority of states now have “right-to-work” laws, and the Supreme Court’s decision in Janus v. AFSCME is likely to make right to work the law of the land in the public sector. Many unions are bracing for an immediate exodus of dues- and fee-payers.

In a right-to-work setting, workers have the option to be free riders, receiving the benefits of unionization without paying membership dues or fees. Yet the duty of fair representation requires the union to represent everyone in the bargaining unit, even non-members. This duty arises from a union being the exclusive representative of a group of workers—no other union or organization can speak for them.

Those are the rules in the private sector, anyway. In the public sector, certain states already allow some form of “members-only unions.” In Florida, for instance, public sector unions are not obliged to represent non-members in grievances. The same is true for teacher unions in Tennessee, where multiple organizations compete to represent teachers in the same workplace.

The anticipated Janus decision has sparked a debate. Should public sector unions try to get “members-only” laws passed? Where such laws are in place, should unions really stop representing non-members?

These questions aren’t hypothetical. In April, New York state passed a law, backed by the AFL-CIO, that public sector unions no longer have to provide representation to non-members in disciplinary hearings, grievances, or arbitrations.

Meanwhile national anti-union groups are promoting a similar idea for their own reasons.

Below are links to several perspectives Labor Notes readers sent in. Want to join in the debate? Email us at editors@labornotes.org.

Debate: How Should Unions Deal With Free Riders?

Jonathan Kissam: Unions Are Class Organizations, and Should Act Like It

Marian Swerdlow: To Thrive after Janus, Deeper Changes Are Needed

Bruce Nissen: How One Union’s Image Got an Upgrade