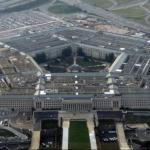 While the world responds with alarm over President Donald Trump's spontaneous decision to cancel diplomatic talks with North Korea scheduled for next month—which aimed to ease rising nuclear tensions—131 Democrats in the U.S. House joined with the overwhelming majority of Republicans to pass a $717 billion Pentagon spending bill that includes massive expansion of the U.S. nuclear arsenal.

The National Defense Authorization Act (NDAA) for fiscal year 2019 authorizes the development of new low-yield submarine-launched nuclear warheads that the Trump administration demanded in its Nuclear Posture Review (NPR), which was released in February and denounced by disarmament advocates as "radical" and "extreme."

On Thursday, anti-war activists and lawmakers shamed the Democrats who voted with the GOP to approve the military spending bill, and warned of its consequences. Rep. John Garamendi (D-Calif.), according to Politico, said the measure "pushes us even further and faster down the path to war, toward a new nuclear arms race."

"Does it make us safer to have a low-yield nuclear weapon on one of our submarines?" Garamendi posed. "Probably not."

"The U.S. spends more on defense than the next eight countries combined," noted Rev. Shawna Foster of About Face: Veterans Against the War. Meanwhile, veterans across the U.S. continue to suffer, and "the State Department is underfunded, showing very little is prioritized in diplomatic solutions that would prevent more of our young people from going to war. We have to turn this around now."

In addition to allocating $22 billion toward U.S. nuclear weapons programs and $69 billion for U.S. war efforts, the legislation approves the purchase of more than 70 F-35 fighter jets, the addition of  16,000 active-duty personnel, and Trump's request for a 2.6 percent pay raise for the military, the biggest increase in nine years.

"Instead of a blueprint for peace and security, this NDAA continues the practice of endless war with no input or oversight from our congressional leaders," lamented Rep. Barbara Lee (D-Calif.), one of 59 Democrats who voted against the bill. "It fails to compel any debate or vote in Congress on our endless wars. And it continues the shameful practice of budgeting our wars off the books with the unaccountable Overseas Contingency Operation (OCO) slush fund."

"The overwhelming cost of unnecessary and aggressive military invasions could be better spent at home meeting human needs," suggested Michael McPhearson of Veterans for Peace. "As veterans we know that our positions are often glorified and are used to support a culture that worships guns and violence at home and abroad, when in reality, we know all too well the dangers and effects of war."

Despite the alarming components of the House-approved NDAA, in the wake of Trump's heavily criticized withdrawal from the Iran nuclear deal, anti-war activists were relieved that the measure makes clear to the White House that Congress has not authorized the use of armed forces against Iran.

"Just weeks after President Trump shamefully pulled out of the Iran deal, it is more important than ever to ensure diplomacy with Iran and in the region," said Lee, a co-sponsor of the amendment.

"This is vital, as the elevation of Iran warhawks in John Bolton and Mike Pompeo and the violation of the Iran nuclear deal has put another disastrous war of choice in the Middle East back on the table," said NIAC Action executive director Jamal Abdi, referring to Trump's recently appointed national security adviser and secretary of state.

While calling the Iran amendment "a welcome step," Abdi emphasized that the administration "has shredded norms and constraints" and that "far more political and legal constraints are needed to ensure Trump, Bolton, and Pompeo cannot put their war plans into place."

The Senate Armed Services Committee marked up a version of the Pentagon spending bill this week, but the Senate's Republican leadership has not formally announced plans to bring it to the floor.