The Unions Strike Back: Janus, West Virginia, Oklahoma, and the Future of Organized Labor 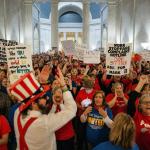 The echoes of the Battle of Blair Mountain, the nation’s largest armed labor uprising, still reverberate throughout West Virginia’s rolling hills—and its classrooms. Starting on February 25, all of the state’s public schools closed for nearly two weeks, as teachers statewide joined picket lines. The protest was the culmination of years-long objections to low pay; the state’s average teacher salary ranks 48th in the nation. Three days before the teachers began their strike, Governor Jim Justice had signed legislation that provided a gradual pay raise for teachers, but one so modest that it would not cover the increase in the cost of living over the next five years. With the legislation failing to address concerns relating to public employee insurance programs, health care costs, and payroll tax deduction options, the teachers decided that they had had enough. Joining together, the teachers and their unions demonstrated that the labor movement is alive and well in the Mountain State.

Ironically, four days into the strike, the Supreme Court heard oral arguments in a case from Illinois that is expected to critically hobble, if not permanently cripple, American unions. In Janus v. American Federation of State, County, and Municipal Employees, Council 31 (AFSCME), the Court revisits its 1977 decision in Abood v. Detroit Board of Education. The Supreme Court is now being asked to hold that, because collective bargaining is a form of political speech, the First Amendment forbids requiring workers to subsidize it, even through agency fees, which the case’s plaintiff claims is inseparable from the political activities of the union. If Janus is decided this way—an outcome nearly all legal commentators expect—public-sector unions such as AFSCME anticipate losing as much as 65 percent of their membership. Indeed, that’s what happened in Wisconsin after Scott Walker and the Republican legislature enacted public-sector right-to-work through the infamous Act 10 in 2010.

Although Janus threatens to deal a mighty blow to American unions, the West Virginia teacher strike suggests a way forward for organized labor in the United States.  The strike effectively used social media as a tool for mass organization, centered the needs of the community, and linked its cause to greater issues of social justice. Organized justice could keep its flame burning by broadly applying these proven tactics from West Virginia.

The West Virginia strike was officially initiated by the leadership of the state’s three major education unions: the American Federation of Teachers-West Virginia, the West Virginia Education Association, and the West Virginia School Service Personnel Association. In practice, it was sustained and managed by rank-and-file union members. When it appeared that union leadership and Governor Justice had reached a deal to reopen schools, union members rejected it, unsatisfied with the proposed pay increase. Those on the front lines vowed to continue the strike.

Most crucial to the strike’s unexpected success was social media-centered organizing. In the months leading up to the strike, teachers, advocates, and community supporters grew the movement’s Facebook page “West Virginia Public Employees United” to a membership 24,000 strong. Members described the page as a highly active space, giving teachers and their supporters an invaluable forum for sharing ideas and planning actions.  Additionally, features such as Facebook Live were used to create an involved and informed base, as members used the livestreaming tool to broadcast Fed-Up Fridays, the weekly prelude to the statewide strike. “West Virginia does have a long history of wildcat strikes,” explained teacher Erica Newsome. “But in terms of all 55 counties going out, that has never happened, and it would not have happened if it wasn’t for social media.” West Virginia teachers demonstrated the efficacy of a tool like Facebook in organizing a mass movement.

Teachers also made remarkable efforts to ensure that schools closing did not mean that students went hungry. This protected the many students who rely on their school for daily nutrition, and blunted criticism that the teachers’ action was harming the students they are supposed to serve. Teachers used Facebook to coordinate with the state’s food pantries, churches, and community centers to send backpacks of food to children. The grim irony of the situation was not lost on Barbara Ehrenreich, author of the acclaimed Nickle and Dimed, a chronicle of poverty in America: “This is our dystopian welfare state: severely underpaid teachers trying to keep poverty-stricken kids alive.”

In remaining cognizant of their community’s needs, West Virginia teachers helped ensure the longevity of their communities’ support for the strike, breaking with the history of public-sector unions.

Remaining cognizant of their community’s needs, West Virginia teachers helped ensure the longevity of their communities’ support for the strike, breaking with the history of public-sector unions. Historically, the organizing efforts of public-sector unions have tended to be far more insular than those of private-sector unions. The working population represented by public-sector unions has become increasingly white-collar and educated over time, contrasting with the blue-collar workforce represented by private-sector unions. In State of the Union, a seminal account of the history of American organized labor, historian Nelson Lichtenstein notes that the victories of private-sector unions have generally benefitted the compensation of both their card-carrying members and other blue-collar laborers, whose non-unionized employers were compelled to go along with levels of compensation and working conditions set by union negotiation. Conversely, as political scientist Daniel DiSalvo argues, public-sector unions have preferred what longtime American Federation of Labor president Samuel Gompers called “pure and simple unionism”—direct efforts focused exclusively on improving their own union members’ benefits. This is opposed to the more leftist “social activism”—attempts to downwardly redistribute wealth. Consequently, public-sector unions have been more likely to concentrate bargaining efforts on what benefits the union at the expense of advancing worker solidarity through their social policies.

The West Virginia strike is significant because it wasn’t “pure and simple unionism.” The West Virginia teachers, recognizing that improving their situation required far more than a pay raise and better health insurance, called for structural change and a rejection of the status quo. As Wendy Peters, the president of the Raleigh affiliate of the West Virginia Education Association, noted, “Wages and health benefits were almost a distraction. They are important, but there were five major stances we took, and we won all five.”  In their bargaining, the teachers focused on the needs of the entire state. For instance, the teachers sought to ensure that their raises would not be funded by cuts to Medicaid.  Rather, the teachers and their biggest ally in the state legislature, Senator Richard Ojeda, called for an increase in the state’s natural gas severance tax to expand funding for the state’s public employee pension plan. They argued that the only fix to the issues they were experiencing was a more just and equitable distribution of the state’s resources, rather than just the usual pay raise.

The West Virginia teacher strike has sparked a reawakening among teachers, offering a glimpse into what could become the norm in a post-Janus labor environment. Across the nation, rank-and-file teachers are taking matters into their own hands; the efficacy of the West Virginia wildcat strike appears to have inspired teachers to act on their own, without waiting for union leadership. Just days after the resolution of the West Virginia strike, the Oklahoma Education Association—representing the nation’s lowest paid teacher workforce—announced that it would shut down schools statewide unless the legislature increased school funding. Insiders note that the union was compelled to action because of a threat from rank-and-file membership to strike regardless of whether the union’s leadership would stand with them. Though the state’s legislature passed a bill that would increase teacher pay by $6,100, the teachers kept their promise to strike, with 30,000 teachers converging on the state capitol in Oklahoma City on April 2. Like the West Virginia educators before them, the Oklahoma teachers maintain that true change can only come from structural reform. Thus, they demand the restoration of the millions of dollars in education funding that had been cut from the budget alongside a pay hike for school support professionals. These Oklahoma educators demonstrate that organized labor is at its most resilient when its efforts align with those of the community at large.

At the labor movement’s peak, advocates envisioned themselves as champions of the people’s welfare state, crucial players in the determination of citizens’ social entitlement, and a formidable force for upward mobility. With shifting patterns in American employment, that aspiration has faded. But every so often, the actions of workers grab the attention of national headlines and reinvigorate labor’s fading flame. In its adept and meaningful use of social media and rejection of “pure and simple unionism,” the West Virginia teacher strike is undoubtedly one of those instances. From the front of the classroom to the front of the American labor movement, these teachers are demonstrating that whatever the courts say, organized labor still has a promising future in the United States.